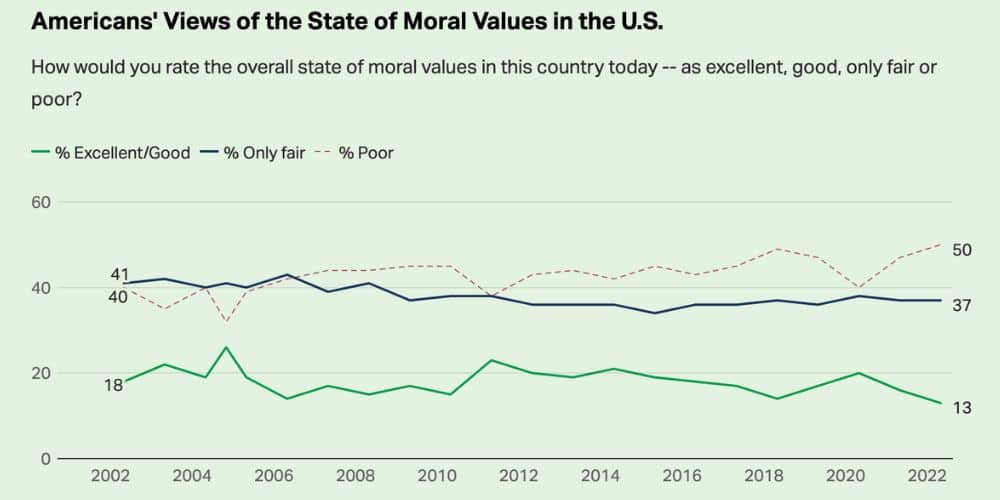 According to a Gallup poll released on June 15, half of Americans rate the overall state of moral values in the US as "poor" with 37 percent rating morals as "only fair."

It is the worst rating on the state of moral values the country has received in the 20 years Gallup has asked the question, although Gallup does say that negative views of the country's moral values has always been the trend.

In contrast, 1 percent of Americans believe the state of moral values is "excellent" and 12 percent think they're "good."

The Gallup summary noted, "While the amount of Americans who rate the moral values of the country as poor has been fairly consistent over the last five years, the number did decline to 43% in 2020 before rising again in the last two years."

The assessment of the country's morality does break down along partisan lines. 72 percent of Republicans rated moral values as "poor" in stark contrast to 36 percent of Democrats.

48 percent of Democrats rated moral values in the county as "fair" and a significant 15 percent rated them as "excellent."

The Democratic Party has been progressively captured by its far-left base and as a result, its concept of morality has normalized attitudes of intolerance and moral superiority that they used to decry. And from racial essentialism through Critical Race Theory to radical gender theory and drag queen story hours the Left's concept of morality is often the literal opposite of even traditional American moral values, such as free speech and equality under the law.

This inversion of morality between Democrats and Republicans is indicative of increasingly irreconcilable and contrasting world views that are foreboding for the future of America.

Both Democrats and Republicans consider chances for improvement bleak and agree that morality will continue to decline with 78 percent of those polled saying things are only going to get worse.

"Americans' views of the state of moral values in the U.S. are dismal," Gallup wrote, "and their expectations for the future are grim."

When the questions of morality were broken down a deterioration of "consideration of others" was marked by both Democrats and Republicans as the number one moral worry, followed by racism, lack of faith/religion, lack of morals, sense of entitlement, lack of family structure, and abortion.