Win or Lose, the Effort in Windham, New Hampshire Must Be Celebrated—Especially if It’s Lose. 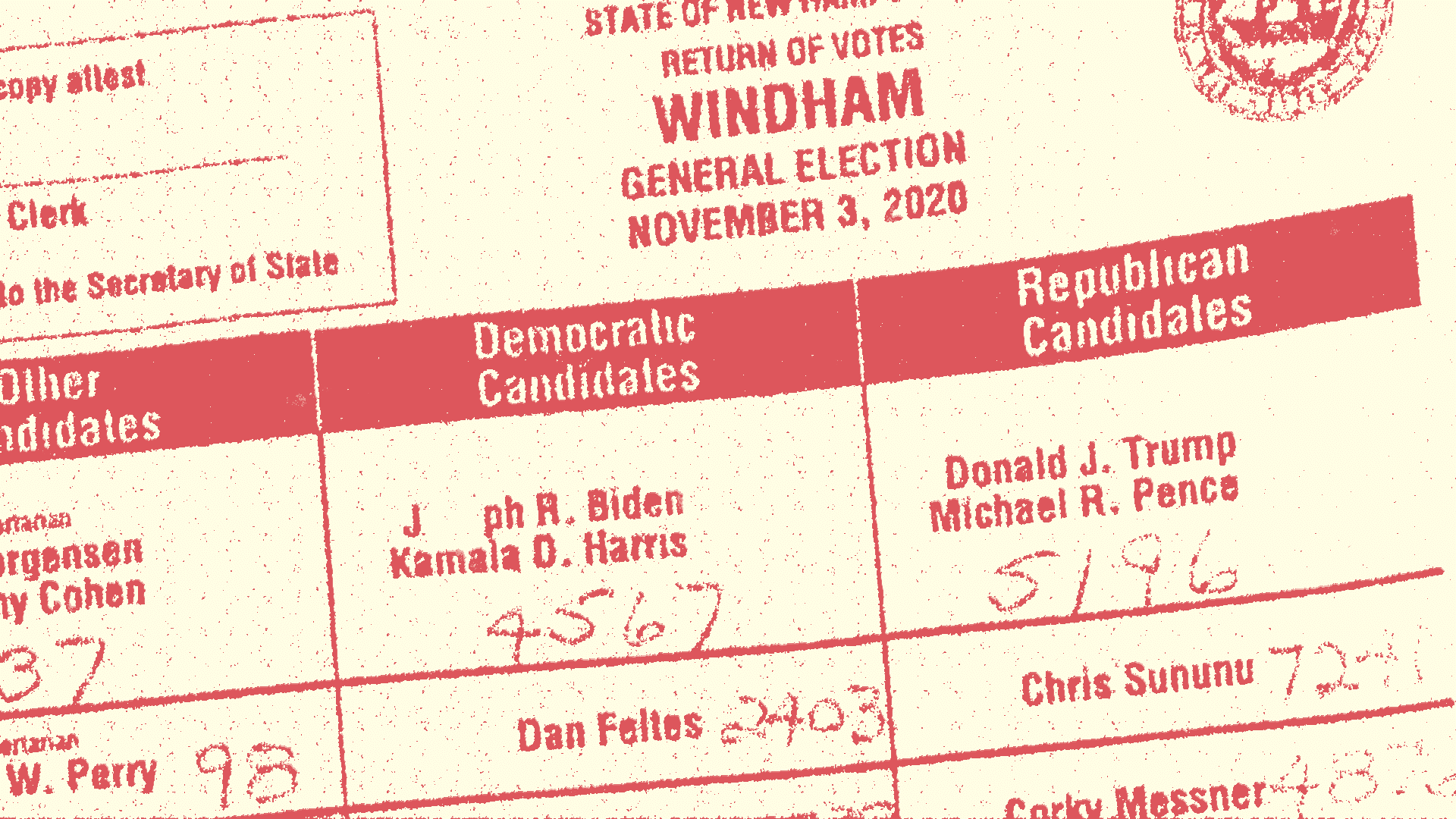 For the past few months, the nation’s eyes have been slowly and steadily drawn to an ongoing story set in Windham, New Hampshire, a tiny hamlet with a population of just under 15,000 and located a few ticks north of the Massachusetts border. The story involves what happened on Election Day 2020. It is similar to other incidents in that it involves concerns over the integrity of the vote. However, unlike those other incidents featuring high-profile attorneys and noted conservative activists standing in front of microphones, in Windham, the story is centered around no one person in particular and includes no single dramatic event.

They are demanding answers and are working within and through the system to make sure they get them.

Instead, the Windham saga stars a collection of mostly nameless and faceless citizens, none seeking notoriety or personal recognition, all joining together to act steadily, relentlessly, and patriotically using whatever tools are available to them as “we the people.” They are trying to get to the bottom of something that just doesn’t make sense. They are demanding answers and are working within and through the system to make sure they get them.

At issue are vote tallies for the congressional races that were on the ballot last November 3. Windham is a traditional GOP stronghold, and, as might be expected, Republicans came out the winner in each of the contested races. The margins of victory were close enough in several races to trigger a manual recount of the votes. After the recount, while all initially declared winners were confirmed, the vote discrepancy between the election day machine totals and those of the hand recount constituted the largest machine count discrepancy in the history of New Hampshire elections.

The citizens of Windham wanted to know why. Both the Republican and Democrat candidates wanted to know why. They asked the state to let them rerun all of the ballots back through the original machines. The Ballot Law Commission refused, saying that they did not feel such authority existed under New Hampshire law. Sorry, Windham voters.

Victory for Windham? Not quite.

Not so fast. Finding a sympathetic and supportive ear in of Republican State Senator Robert Giuda, Windham patriots were able to get a piece of special-purpose legislation passed that removed any ambiguity as to whether or not a rerun of ballots could take place. For a moment, it looked as though only a sample of the ballots would be run through the machine, but having already proven the fact that something was materially amiss given the difference in machine versus hand counting, the legislation authorized a universal rerun in the affected areas—something that any professional auditor (I was one) would tell you is required when such a large discrepancy is evident.

Victory for Windham? Not quite. In addition to disputes about where the audit would be conducted (in Windham proper or in the Capital of Concord), there was the matter of selecting the three auditors tasked with overseeing the process. One was to be one chosen by the state, one chosen by the town (represented by the Windham Board of Selectmen), and a third was to be chosen jointly by those two.

After a series of meetings in Windham that were oddly managed and hotly contested, the Selectmen voted a member of Verified Voting as their appointee—a group that had openly opposed the vote recount in Maricopa County, Arizona. The state selected an auditor from the same group. This week the two then joined together to select the third auditor. You guessed it. That third auditor is also a member of Verified Voting.

HOW BEST TO FRAME THE WINDHAM EXPERIENCE

There are a number of angles from which to view events in Windham. One is from the cynic’s perspective, suggesting how hopeless it is to try to fight against the system. As an alternative, you could simply commend the people of Windham for their valiant efforts before moving on to the next issue. President Trump himself issued a formal communication on Thursday praising them for their patriotism. If you wish to be noncommittal, you can take the position of waiting for the audit to be completed before commenting and seeing if maybe these auditors, despite a controversial background, actually execute their duties thoroughly and without bias.

We need to be failing everywhere across the country in our efforts to hold government, companies, and representatives accountable for their actions.

There is another, albeit less conventional, way to view the Windham experience. It is also the way that we need to begin to view other similar experiences throughout our country as the iron curtain of collectivism continues to fall, blocking out much of the light that has shone upon individual freedom for so long. That less conventional but necessary view is to assume that the Windham voters are going to be denied an honest audit, that all their efforts will have been for naught, and to offer them our deepest and most profound thanks and congratulations for their failure.

That is because it will only be as a result of collecting numerous losses that our efforts will begin to wake up the majority of other Americans who are still sound asleep with their time-to-lose-liberty iPhone alarm set on silent.

The courageous citizens of Windham have done everything that good dissidents are supposed to do. They did not recklessly martyr themselves on social media, ranting like petulant children. They did not threaten violence against anyone in state or local government. On the contrary, they petitioned their state government and got legislation sponsored and passed. They turned to town halls and spoke their mind. Sometimes, they did so a bit emotionally, but what could we expect? All they were asking for was for a simple test—for the system to work the way it was supposed to—and they were being met with resistance.

They made no accusations. They did not spread wild conspiracy theories. They just worked through the system as was proper. All along, the system would first resist them, then appear to accommodate them. Now, at the eleventh hour, it seems the system has decided to smack them right across their collective face.

Good for you, Windham. Feel the sting. Taste the bitterness. Stay steady. Then do yourselves a favor and head to Friendly Red’s Tavern, raise a glass, and toast yourselves to a glorious loss. America needs more dissidents, just like each and every one of you.

One of the most difficult things for freedom-loving Americans to come to accept is that we are not going to be able to quickly reverse the situation we now find ourselves in. Some are thinking that the 2022 midterms might ease the pain. Others point to a possible 2024 return of President Trump. Both thoughts can be pleasant, but both are naïve.

While I know there is no quit in them, and while I would certainly not bet against them, it appears as of this moment that the people in Windham have probably lost.

While on the surface, our current situation seems to have come upon us suddenly, it has actually been many decades in the making. President Trump could not stop it, and a possible Republican House and Senate majority taking control in January 2023 can’t alter its course. Our nation has been infected with the disease of collectivism. Our Constitution has been reduced near the level of a mere reference document. At all levels, elected and appointed officials are getting more comfortable doing what they personally think is convenient instead of doing what is clearly instructed. Big business has joined with big government and the education industry to set goals, establish requirements, and enforce compliance.

This means that we can no longer count on the system to work, or the people in it to behave the way they should. Paradoxically, the lack of reliability and justice in the system make it all the more important for us to use the system. We have to participate. We have to show others what we are doing. We have to expose ourselves to risk. We have to lose.

While I know there is no quit in them, and while I would certainly not bet against them, it appears as of this moment that the people in Windham have probably lost. They have had victories along the way, and if this process does end in their favor, to quote Shakespeare, we shall smile indeed! It is easy to celebrate when you win. That is human nature.

But it’s important that we now learn to embrace a different nature: the nature of the dissident. We need to know how to celebrate loss. We need to experience the joy of knowing we failed, and that others will notice we failed. That is the long game we need to play. It is a long game characterized by piling up so many losses that we inevitably will begin to win.

The effort in Windham to get clarity on their November vote just might be dead. Long live Windham!