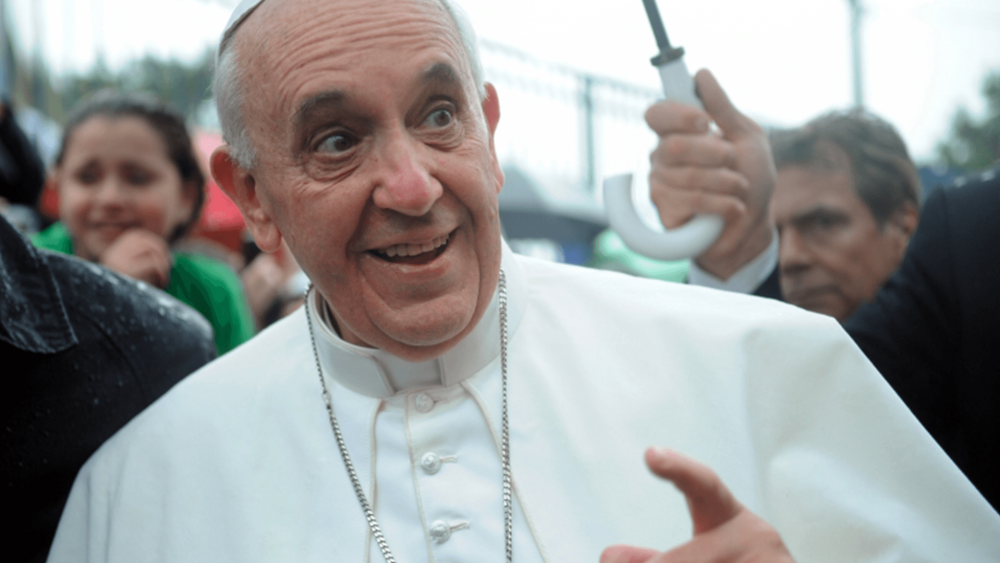 In a recent foreign policy address, Pope Francis once again signaled his commitment to the prominent themes of a plan by the globe's most powerful entities to leverage the carnage of the COVID-19 pandemic to establish a global economic system that would formally position the world's largest corporations as the keepers of society.

"Pope Francis urged governments on Monday to use the coronavirus crisis as a revolutionary opportunity to create a world that is more economically and environmentally just — and where basic health care is guaranteed for all,"  AP reported.

In addition to pushing "the right - the right!" of universal healthcare, Pope Francis also referred to the current "economic and social crisis" as evidence that the world is in need of a global economy focused on the "social significance of economic activity."

"The resulting economic crisis has highlighted another illness of our time: that of an economy based on the exploitation and waste of both people and natural resources."

"The current crisis thus provides a helpful opportunity to rethink the relationship between individuals and the economy. There is need for a kind of 'new Copernican revolution' that can put the economy at the service of men and women, not vice versa. In a word, 'a different kind of economy: one that brings life not death, one that is inclusive and not exclusive, humane and not dehumanizing, one that cares for the environment and does not despoil it”.

"Common and shared initiatives are also needed at the international level, especially to support employment and to protect the poorest sectors of the population. I consider to be significant in this regard the commitment of the European Union and its member states. Despite difficulties, they have been able to demonstrate that it is possible to work diligently to reach satisfactory compromises for the benefit of all citizens. The allocation of funds proposed by the Next Generation EU recovery plan can serve as a meaningful example of how cooperation and the sharing of resources in a spirit of solidarity are not only desirable but also achievable goals."

The Pope's language is in line with that of the World Economic Forum's plan for a global Great Reset, which uses the pandemic as a catalyst for a plan that "positions private corporations as trustees of society."

The plan would put the "financialization of the world" we see today "into reverse," in part by forcing businesses across the globe to "adapt to greater government intervention." The Reset's "partner" list is made up of the world's favorite multinational corporations like Apple, Toyota, Google, Facebook, Visa, The New York Times, and Pfizer. These companies have signed onto the plan to integrate Big Government and Big Business.

WEF’s Covid Action Platform insists that “Only coordinated action by business, combined with global, multi-stakeholder cooperation – at exceptional scale and speed – can potentially mitigate the risk and impact of this unprecedented crisis.”

Schwab notes that the role of the state has "shrunk considerably" in the Western world, but says this is "set to change" because "it is hard to imagine how an exogenous shock of such magnitude as the one inflicted by COVID-19 could be addressed with purely market-based solutions."

"Already and almost overnight, the coronavirus succeeded in altering perceptions about the complex and delicate balance between the private and public realms in favour of the latter," write Schwab and co-author Thierry Malleret. This shift is something that Schwab has been pushing for at WEF for years. His Reset plan addresses the pandemic as a unique opportunity to lead humanity to "rethink governments' role."

The Pope's language in his recent address directly mirrors the language of WEF and their "stakeholder capitalist" allies. But the connection between the Pope and this vision for an international government-corporation conglomerate need not be left up to speculation.

In December, Pope Francis joined forces with the Rothschilds to "reform capitalism." In addition to having the shared mission of establishing a new order of "stakeholder capitalism,” the Council for Inclusive Capitalism with the Vatican has a corporate partner list that overlaps substantially with the WEF. Mastercard, Alianz, Johnson & Johnson, Visa, and Bank of America can be found on both lists, for example.