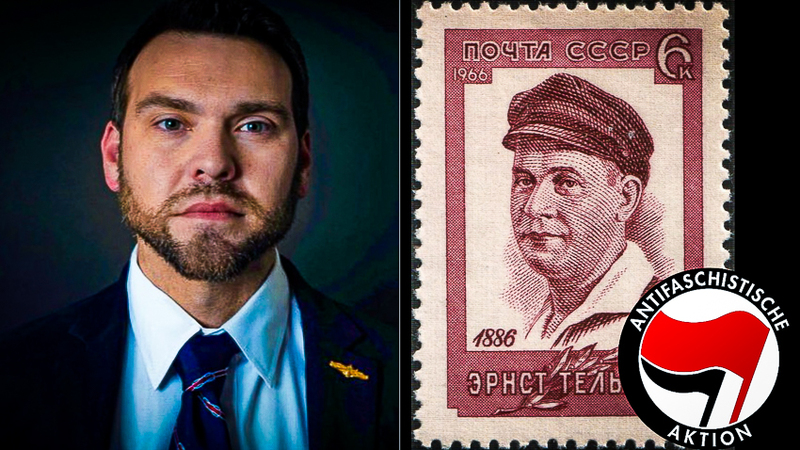 On Friday's episode of Human Events Daily, host Jack Posobiec delved into the true history of Antifa, and explained that despite what some may have you believe, it is not a decentralized, disorganized group that has spontaneously arisen, but a near century-old strongarm of communist authoritarians deliberately working to destroy the foundations of America.

"We're going to tell you the true history of Antifa," Posobiec said. "The seeds of what would become the present version of Antifa, worldwide, were actually planted all the way back in 1930s. Germany. Yeah, that's right. The Weimar Republic. The group likes to present itself as the inheritor of a tradition of fighting fascism. But is this true? Well, the first eponymous Antifa group was Antifaschistische Aktion. It was founded by a Soviet agent, and a committed Stalinist who's named Ernst Thälmann in 1932 in Weimar, Germany. And if you don't know the name Ernst Thälmann then perhaps you haven't been studying the true history of Antifa."

Posobiec explained how the Antifa movement Thälmann founded had been influenced by the upswing in the late 1880s of anarcho-socialist terrorism that was prevalent in both Europe and the US.

"We've had anarcho socialist uprisings in the United States; the Haymarket Riots in Chicago, they killed police officers, the Wall Street bombing, the assassination of President McKinley that led to Teddy Roosevelt becoming our youngest president. He was killed by an anarcho-socialist in Buffalo, New York by the name of Leon Czolgosz."

Thälmann was also a product of post-World War I Germany, a country that found its "spiritual foundations" deteriorated. The same landscape that produced Adolf Hitler, whose rise exploited many German's fears and "widespread belief the German communist would use the economic chaos of the depression as a vehicle for taking power, installing a regime like the Bolshevik dictatorship that had been established in the USSR."

"This fear was then magnified by a Soviet agent, who'd become the leader of the Communist Party of Germany. What was his name? Ernst Thälmann, later the founder of Antifa."

Posobiec explained how Thälmann, unlike many others who pushed communism, like as Lenin and Trotsky, came from a working-class background and later became the leader of Germany's Communist Party. That group often worked with the National Socialist Workers Party in opposition to the Social Democrats, an alliance that contradicts many modern Antifa's assertions that the group was staunchly anti-Hitler.

Posobiec explained how Thälmann created the Red Front in the 1920s, which was a multi-faceted, paramilitary group dedicated to the oath "I vow to never forget that world Imperialism is preparing the war against the Soviet Union."

"Thälmann himself was hand selected by the Stalinists. He flew to Moscow, served in the honor guard at the funeral of Vladimir Lenin and then is sent back to be Moscow's man in Germany," Posobiec notes. "He leads the Communist Party, sets up the Red Front fighting group, sets up all of this directly on the orders of Trotsky. Why? Because Thälmann is the man that they view is going to be their candidate."

Thälmann did run for president against Hitler and Paul von Hindenburg in 1932 in an election won by Hindenburg.

"But he is the man that they [the Soviets] view will deliver Germany to them," Posobiec said.

"However, just before 1933, When Hitler was able to solidify his rule, becoming Chancellor, that's when Antifa is finally formed," Posobiec said. It was the Social Democrats, as they were about to lose power, banned the Communists and named them as foreign agents for the Soviets.

In response, "Thälmann realizes he has to come up with something new, a new type of group that is yet to be banned. In July of 1932 Thälmann inaugurated Antifaschistische Aktion."

Posobiec explained how Thälmann knew that the word "Anti-Fascist" would be a red herring to divert the uncurious as to the group's linkage to the Communist brigades.

Posobiec continued to note the linkage between the Communists, these Anti-Fascists, and the Nazis, as both were united during Hitler's rise in an effort to undermine the Weimar Republic.

"First Hitler, then us," was a phrase they said at the time.

Then as soon as Hitler came into power they were the first to be arrested, and Thälmann was arrested in 1933, spent 11 years in prison, and ended up in the concentration camp at Buchenwald.

While Thälmann became a "cause celeb" for communists across the world, he never was released and communists never really pushed for his release, and was eventually shot and killed by Hitler in 1944

Posobiec, who wrote The Antifa: Stories From Inside the Black Bloc, recounted how the modern iteration gets it wrong about their own history. Posobiec explained how the group only exists to be a destabilizing force. Earlier in the podcast, he noted its surge in 2020 on top of the BLM riots and how that had attacked President Trump's inauguration in 2017 and the "DeploraBall" inaugural party that Posobiec attended. Posobiec described the hallmarks of modern Antifa violence, "we had hundreds of Antifa out in the streets, attacking people, setting fires, throwing things at our guests, throwing things that my parents like D batteries."
Jack Posobiec
poso antifa