The Elites' War on Beauty Is a War on God, Eric Metaxas Tells Posobiec 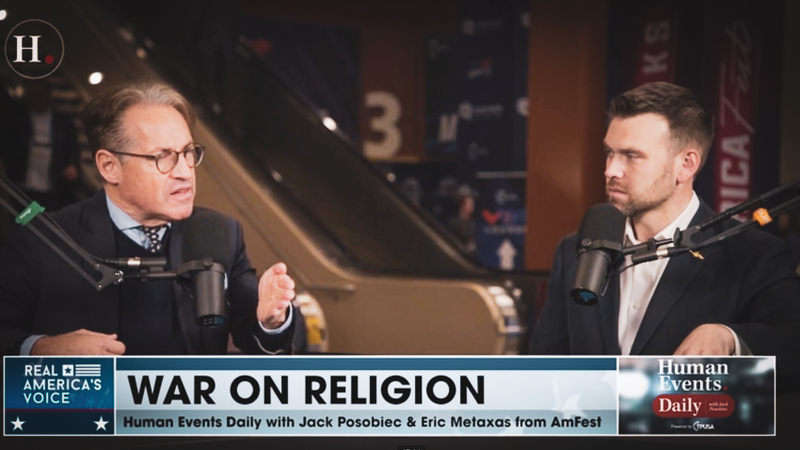 poso metaxas
Human Events Daily host Jack Posobiec was joined by Eric Metaxas, where the two discussed the issues being faced by Christians, and specifically, whether there is a war on Christians in the West today. Metaxas asserts that atheism is waging a war on God, with its staunch belief that removing God will make things better.

"Everything that God has put in order–the family, men, and women, beauty and goodness–these people are wittingly or unwittingly...at war with these things. You see it in 20th-century art, a war on beauty. Now we're going to make ugly things and tell you that they're beautiful, and we're going to make ugly skyscrapers and brutalist architecture that everyone will want to gag at, but if you're sophisticated, you'll think is good."

Metaxas explained that everything beautiful and accessible has been shot down by elites, who "want to do archaic, difficult, ugly things. 'We want to create poetry that no one will ever read except for us and our five friends.'"

In his 1958 book The Naked Communist, former FBI agent W. Cleon Skousen writes that the far left would be able to gain power in the US by corrupting institutions and by degrading forms of artistic expression.


He writes that the Soviets aimed to "Continue discrediting American culture by degrading all form of artistic expression. An American Communist cell was told to 'eliminate all good sculpture from parks and buildings,' substituting shapeless, awkward and meaningless forms.'" He also wrote that they aimed to "Control art critics and directors of art museums." He included that the Soviets' plan was to "promote ugliness, repulsive, meaningless art."

Metaxas in his own book, Is Atheism Dead?, writes that everything that is good and true and beautiful is "of God and points to God," adding, "Whether you know it or not. When you look at the sunset, you don't say, 'That's a Christian sunset.' But you're moved to tears or moved by something beautiful. Why are you moved?"

The strict atheist angle would say that there is no objective thing as beauty or truth, and that anything that is felt is just a biochemical reaction.

"The bottom line is, most people know that's garbage," Metaxas said, adding that we are made "in God's image, for eternity, and with Him in a world of beauty, truth, and goodness. Everything in the world points to that. The Marxist stand heists, the materialists say we can't have that so we're going to unmake anything good, beautiful, and true, including family, love that a husband and wife have for each other, the beauty of a nation, of national cultures, all of that stuff, they're at war with that."