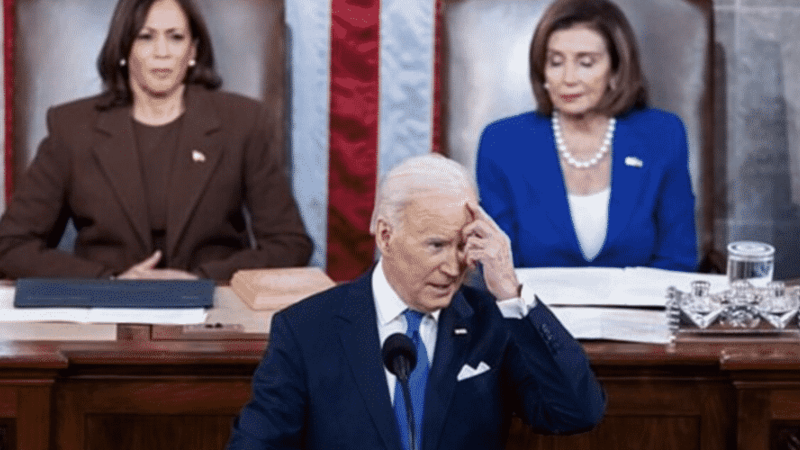 KRAYDEN: Biden Ignores Every Emergency Except the Phony One by Human Events
Dictated by A.J. Rice aboard Air Force One

My name is Joe Biden. I cheered when John Fetterman won the Senate seat from Pennsylvania for two reasons: he’s another Democrat rubber-stamp vote, and he makes me sound lucid. He will be a puppet for his handlers, who will be chosen by the Democratic caucus in the Senate, so he’ll be more than easy for the party to control. He won’t be another Joe Manchin, in other words.

I’ve been in politics for decades, longer than most of the country has been alive. During all those decades in Washington if I have learned one thing it’s that the government really does know best for you. I brought that attitude to the White House for two years now and I’m not about to stop. A reporter asked me if I would change anything, with inflation out of control, the border in total chaos, threats of nuclear war in Europe, crime plaguing our cities at home, and most Americans practically begging me not to run for re-election. “Nothing,” I replied. I wouldn’t change a damn thing, except spend more and make everything you need to buy more expensive because in my opinion, it’s for your own good.

I do whatever the Democratic Party’s highest bidders tell me to do, because throughout all my years in power, I have been up for sale to the highest bidder. My name is Joe Biden, and I have no principles at all. For two years, that’s meant turning the entire federal government woke, hostile to our foundational values, and hostile to about half the country. I don’t care and wouldn’t change a thing.

My program is very simple: In the name of doing what I and my handlers think is best for you, I am draining your life savings faster than any other president in American history. Not through tax hikes, because Joe Manchin will likely stop me there. Congress is still evenly split and would never pass a straight-up tax hike no matter how much I want it to (and I really do want it to). But I can get Congress to provide “relief” in the form of sending you checks. I’ve printed trillions of dollars. You got a couple grand. You will think I have been benevolent. But before long, printing all the trillions of dollars necessary to send millions of Americans checks has had one effect: inflation.

Printing more dollars means each dollar is worth less than it was yesterday. You will see this in the form of price increases. Not just a few price increases. Everything will cost more. The food you eat, the clothes you wear, the car you need to get to work, and the gas you have to buy to get there – all of it will cost more. You see inflation across the board. I will push mortgage rates to 7%. Month after month, historic price hikes, and I’ll blame it on Vladimir Putin. My name is Joe Biden and you have my word on that. My handlers who tell me which reporters to call on in press conferences, and who walk back nearly everything I say, know what’s best for you. A divided country where no one trusts anyone else makes government more powerful, so that’s what we’re going to build. An all-powerful government. That’s the goal, and wokeness is the path we use to get there.

I’ll do something else if you elect me president. You see, I believe that we have to end the American dream in order to save “the environment.” That means you must hurt, and you must hurt now. So on Day One I promise to prioritize “the environment” over everything else – the economy, your job, your family, everything. So I canceled the Keystone XL pipeline which would cleanly and safely bring Canadian oil here where we can use it. You see, that oil would keep the price of gas here low. It would help keep America energy independent. That’s good for you, and good for our national security, but it’s bad for “the environment,” or so the scientists we pay through government grants tell me to say. I’m not a scientist and have never actually done anything outside of government so I don’t know anything from experience. But that’s what they tell me, and we pay them to say it, and in turn billionaires pour money into my party’s coffers to control me like their meat puppet. So that’s the way it will be. The environment wins, and you lose. Sorry. Even though other sources of oil are dirtier and require ships to move it around, increasing the likelihood of spills. I don’t care. Venezuelan oil is better than Texas oil because my handlers say so. I gave Russia the upper hand in Europe’s energy, and Putin used those riches to fund his invasion of Ukraine.

If you question me on any of this, I may get you banned from social media. Or question your patriotism. Call you a threat to democracy. Get you ostracized and maybe fired from your job. You have my word on that. Because I don’t actually care about uniting this country and I never cared about you.

My name is Joe Biden, and let me tell you something else. For about a century now the American military has been the most united and the strongest in the world. The incredibly wealthy people who have bought my party through dark money have decided to end that. So as soon as I took office, as their puppet, I divided the US military against itself like no one has since the Civil War. I will force all of our military volunteers through training designed to undermine the country they serve, to trash its history by centering it entirely on slavery, and to see each other – and you – with suspicion. The new military will tolerate everything that makes it weak, and will throw away whatever makes it strong. My military will deem you a racist. These hunts for “extremists” in the ranks will burn through the American military like acid. You have my word on that.

America has been at war against the terrorists who attacked us on 9-11 too long and we don’t need a strong military and we certainly don’t need to show strength to any of our enemies – who really aren’t enemies anyway. If you didn’t vote for me, you’re my enemy. I’ve made that abundantly clear for two years. I despise you if you didn’t vote for me.

But China’s communist government certainly isn’t my enemy, not after they funneled millions of dollars to me through my son, Hunter. That’s been proven true after the media conspired to cover it up for the election. So I am China’s meat puppet too. I surrendered Afghanistan as soon as I could and humiliated America before the entire world. I abandoned the only viable base we had in that country, leaving our allies in the dark. I will make sure our new woke military goes to sleep on the threat of international terrorism, while I focus it and the entire federal government on dissenters here at home.

While you are paying more for gas in a deeply insecure world on the verge of a historic crisis, I have done two more things. I opened the border to millions of people who will compete for your job, raise the price of the house you want to buy, clog up the roads, soak up more inflationary federal spending, and bring who knows what into this country. Yes, I did this in the midst of the deadly COVID pandemic. While you were locked down, the border was and will be wide open. I will ensure that poisonous fentanyl can cross into America and reach all of our cities, ensuring a spike in overdose deaths. I will ensure that human traffickers can bring children across the border and into sex slavery unfettered. I, Joe Biden, am against the slavery America already abolished, but I will facilitate the child sex slavery that is plaguing all of our cities.

My name is Joe Biden. I have no idea what I am going to say or what I am going to do at any given moment. I may put America on the hook for regime change in Russia, which just might trigger a world war. I will make your savings all but worthless, I will make your cities crime-ridden hellholes, I will jeopardize your children by flooding America with fentanyl, I will demonize the police and empower those who do, I will attack your right to defend yourself against criminals, and I will mock you every step of the way. I will be the meat puppet for some of the most extreme, bitter, anti-American people in our country and around the world. They hate you. They hate the American dream.

And I, Joseph Robinette Biden, will be nothing more or less than their meat puppet. Because I hate you.

A.J. Rice, is President & CEO of Publius PR, Editor-in-Chief of The Publius National Post, and author of the #1 Amazon bestseller, The Woking Dead: How Society's Vogue Virus Destroys Our Culture.

Editor's Note: In case it should need to be said, the above is a work of satire. -- Celine Ryan Ciccio, Managing Editor

KRAYDEN: Biden Ignores Every Emergency Except the Phony One by Human Events