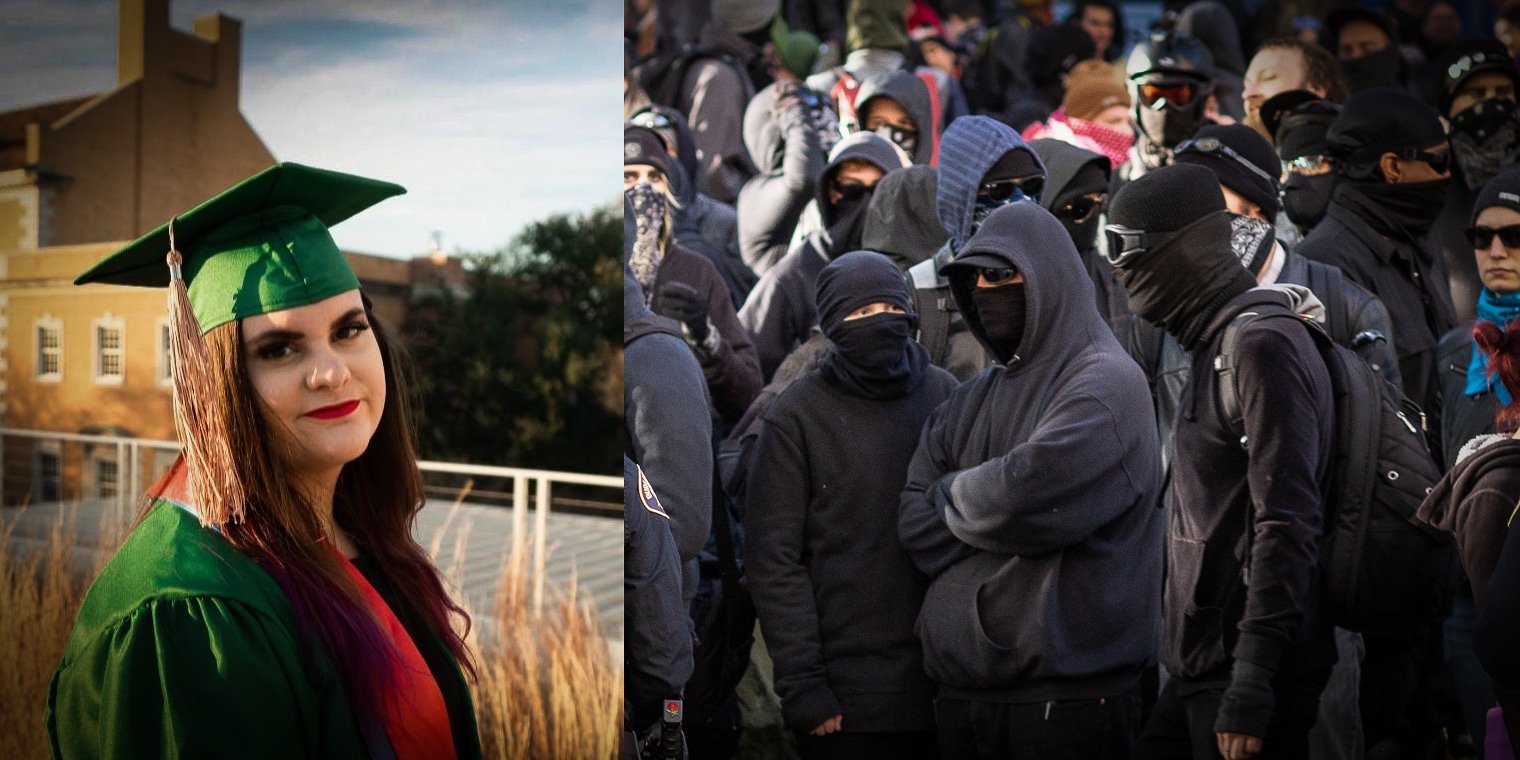 If you think Antifa are not operating in large numbers in Texas, you are sadly incorrect. I’m a 22-year-old from Denton, Texas and an unapologetic conservative activist. I spent much of my time at the University of North Texas, from which I just graduated, leading its main conservative student group, the Young Conservatives of Texas. And for that, Antifa and the far-left here have sought to intimidate me into silence by doxxing me and my family, and threatening me with violence and even death.

My first experience with far-left extremists from the Dallas-Fort Worth area was during my senior year at UNT when I began to speak about my political and religious beliefs. In October 2021, I organized a pro-life prayer vigil on campus. But what was intended to be a quiet and somber evening quickly turned into a nightmare.

About 250 students and outside Antifa agitators marched to shut down the event. They screamed chants to rattle and disturb those who just wanted to pray. A local chapter of the John Brown Gun Club, a far-left militia allied with Antifa, put out a flyer on Twitter falsely calling us “fascists” and rallying militants to the event. In 2019, a member of a John Brown Gun Club group in Washington state carried out an attempted terrorist attack on a federal building before being shot dead. He left behind a manifesto identifying as Antifa.

Fox News reported on the prayer vigil targeted by Antifa at UNT in October 2021.[/caption]

Fox News reported on our prayer event. “Antifa protesters disrupt Texas college campus pro-life prayer vigil: 'F--- your God!'” read the headline. But that was hardly the worst thing the far-Left extremists shouted. When they failed to break me and my peers with verbal attacks on our religion, they threw condoms at us and banged drums so that it would be impossible for us to ignore them.

Our group of a few dozen students was surrounded and backed into a corner while the mob screamed and told us we were not safe. Police were eventually forced to intervene as the threat to our physical safety grew.

That night was disturbing, but it was just a preview of the year Antifa had in mind for me. In March, many of the same militant students and outside agitators—who faced no censure from administrators for their bigotry–showed up to try and shut down another event I helped organize. This event was critical of child sex transitions. I stepped on another landmine.

A 33-year-old man named Christopher Guillott, who leads the Elm Fork John Brown Gun Club that targeted us previously, put out another call-to-action on his group’s social media accounts. He managed to get around 500 people to show up. I had already received numerous threats leading up to the event, but I refused to call it off. Police had to show up in full force, and about 20 came in protective riot gear. There were even armed officers on rooftops of campus buildings to help monitor the buildings from the outside.

Christopher Guillott is a leader of the far-left militia, the Elm Fork John Brown Gun Club[/caption]

The far-left extremists were let inside the event. They made it immediately clear they had no intention of good faith participation. Almost immediately as the speaker spoke, the protesters began screaming, and even spit on us. “F— these fascists” they chanted in unison like a cult while pounding on the table.

Some of this footage went viral. Outside the room, there was an even larger mob waiting for me. Before the event could finish, the speaker and I were evacuated by police. I was then hidden in a janitor’s closet in a different building as police tried desperately to secure a safe route out.

However, Antifa and their far-left allies breached the building. I heard them shouting my name. It was surreal. They even tried opening the locked closet I was in. I feared for my life.

After that second event, the far-left escalated their targeting by going after me outside of campus. That semester the Daily Beast published a smear piece against my brother and me titled, “The Conservative Twins Behind Transphobic Campus Hate Campaigns in Texas.” The hit piece was co-written by socialist activist Steven Monacelli, a far-left radical himself who is currently being sued for libel by a Texas newspaper. He has had his own history of violent extremism reported by The Post Millennial.

After the article was published, threats against me increased exponentially. Most of the targeted harassment and threats were aimed at making me feel unsafe wherever I was. I also became a victim of identity theft and bank fraud. Doxxing, where one’s personal information including address, phone number, or banking information is released, is part of the modus operandi of Antifa.

By April, someone had come to my apartment in broad daylight and spray painted, “Stay home Nazi cunt” on my door. Local police took a report of the vandalism, but nothing happened. My address was also written around my university and was posted hundreds of times by anonymous accounts on social media. These acts all comprised Antifa’s stochastic terrorism, the repeated demonization of a target in the hope that someone will eventually carry out violence against them.

One UNT student and a member of the John Brown Gun Club, Garrett Lee, threatened me on Twitter: “For legal reasons, this is a direct threat. Enjoy your kneecaps while you’ve still got them.” I reported it t­­­o campus police, but again, nothing happened.

For graduation in May, I had to get private security.

My time at UNT is over, but the harassment has continued. I recently founded a nonprofit called Protect Texas Kids to help fight against leftist indoctrination of children. Our events have been met with violent opposition from the far-left that often requires a law enforcement response.

Unable to silence me, Antifa has also begun to harass my family. An anonymous Antifa-linked Twitter account has posted my mother’s workplace. Her supervisors were flooded with calls and emails demanding that she be fired because of her relation to me. The same account also tweeted my parents’ address numerous times.

The left does not care if a woman is followed, mobbed, and assaulted if she is conservative. In fact, they often encourage it. However, Antifa’s campaigns of stochastic terror against me have failed to produce the result they want: silence. Texas has a lot of Antifa members, but there are also a lot of people like me who won’t back down.