The Duchess Is a Victim and Football Is Gay. 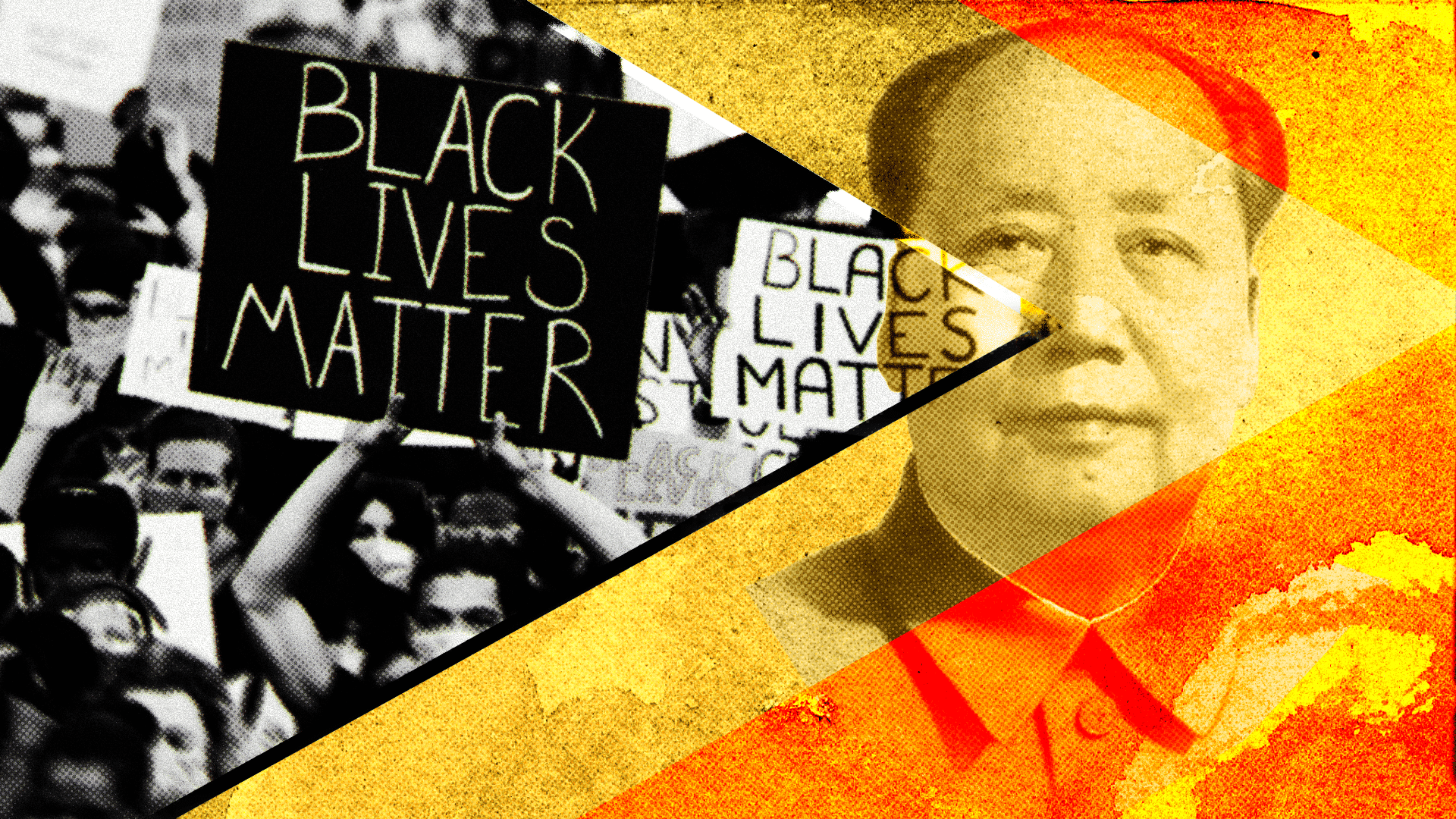 Identity politics has engulfed America’s cultural landscape like a tsunami. Unsure how to escape its destructive path, Americans feel like deer caught in the headlights, on a road paved with eggshells. This divisive ideology—steeply rooted in Marxism and fueled by racial narratives—has spread like wildfire through America’s most cherished institutions. Anyone who resists it or dares question the motives of its doctrines or disciples—Critical Race Theory and the Black Lives Matter movement, for example—is dismissed as a racist.

Americans have allowed a generation of radical extremists to commandeer their society.

The constantly changing lexicon of identity Marxism has left Americans dazed and confused. Words and ideas that are anodyne today become verboten tomorrow. Americans’ heads are spinning just trying to keep up—wait, now ‘football is gay’? I thought we weren’t supposed to call things ‘gay’? We believe survivors—well, only some survivors. Up is down, down is up.

Americans are asking themselves, “What the hell is going on?” But they dare not ask out loud. Terrified to speak out for fear of being “canceled,” Americans have allowed a generation of radical extremists to commandeer their society. As a result, their society is being torn apart at the seams.

What is happening to the United States is not simply the organic evolution of our culture and society; it is the result of a carefully scripted campaign that has been used to destroy cultures and overthrow societies the world over. To make sense of what is happening to America, and understand the reasons why it is happening, we must first understand Marxism’s “long march” through America’s culture-making institutions.

THE INSIDIOUS REPACKAGING OF OLD-WORLD MARXISM

Marxism is a binary philosophy that divides people into competing economic classes (rich versus poor, oppressors versus oppressed, etc.) and seeks to bring about “the forcible overthrow of all existing social conditions.” Marx encouraged violent revolutions to bring about egalitarian, Communist dictatorships. Despite attempts made by the Communist Party of the United States of America (CPUSA) and a handful of ideological agitators, Americans have largely rejected Marxism for most of the 19th and 20th centuries (that rejection felt resolute with the fall of the Berlin Wall in November 1989, and the dissolution of the Soviet Union in 1991).

Life in America was too good for its working class to support the Marxists’ aim of ‘burning down’ the system.

In short, life in America was too good for its working class to support the Marxists’ aim of ‘burning down’ the system. America was, and still is, a land of rags to riches stories, where one’s status at birth did not determine his/her status in life. The vast majority of working-class Americans had no interest in destroying a system that had created the highest standard of living for its citizens of any nation on earth. However, Marx’s disciples were most bothered by the fact that Americans shared a common culture of God, family, country, and capitalism. In the eyes of the Marxists, America’s culture—its national unity—was the roadblock to Marxism in America.

In the 1960s and 70s, Marxist philosopher Herbert Marcuse theorized that it would be easier to stoke grievances among minority groups than among America’s working class. Stoking racial divisions to destabilize the United States was not an entirely novel idea. As former CPUSA member Manning Johnson described in Color, Communism and Common Sense (1958), “Stirring up race and class conflict [was] the basis of all discussion of the Communist Party’s work in the South. The evil genius, Stalin, and the other megalomaniac leaders in Moscow ordered the use of all racial, economic and social differences, no matter how small or insignificant, to start local fires of discontent, conflict, and revolt.” Manning claimed, “the plot to use Negroes as the spearhead, or as expendables, was concocted by Stalin in 1928.”

The genius of Herbert Marcuse, however, was in expanding the tent. Marcuse saw revolutionary potential not just with blacks, but with immigrants, homosexuals, transgender people, women, and other so-called disaffected groups, which he referred to as “the substratum of outcasts and outsiders” in his book One Dimensional Man (1964). As Matthew Lohmeier pointed out in Irresistible Revolution (2021), Marcuse “recognized that… there existed great revolutionary potential among these minorities,” but “they would still need to be led ideologically” (emphasis added).

According to Marcuse, if this mélange of minority groups could be organized and taught by an intellectual vanguard to collectively embrace the role of the oppressed, such a coalition could replace the working class as the new revolutionary base in the Marxist binary.

Whites were substituted for the bourgeoisie (the rich) as the new oppressor class; all other groups were said to be oppressed.

Marcuse and the post-1960s radical left believed identity politics (and its tactical doctrine Critical Race Theory) was the chariot on which they would ride to a Marxist utopia in America. Critical Race Theory (CRT) became the philosophical mechanism that identity Marxists would employ to destroy America’s shared culture—its ‘national cohesion.’ “The Communist regime used the same Critical Theory to divide the people [in China],” says Xi Van Fleet, a Chinese-American who survived Mao’s Cultural Revolution, “the only difference is they used class instead of race.”

Instead of dividing the people into economic classes, as the Bolsheviks had done in Russia and Mao’s Communist Party did in China, the New Left divided people into groups based on race, sexual preference, sexual orientation, gender, nationality, disability status, and more. Whites were substituted for the bourgeoisie (the rich) as the new oppressor class; all other groups were said to be oppressed.

This perverse ideology is the antithesis of Rev. Martin Luther King, Jr.’s vision of a colorblind society. King’s longing for a society in which people would “not be judged not by the color of their skin, but by the content of their character” is anathema to today’s radical left. So-called ‘woke’ adherents of identity politics believe the content of one’s character is moot: group identity is all that matters.

It doesn’t matter that Meghan Markle is a Hollywood starlet and royal Duchess, or that Oprah Winfrey and Lebron James are billionaires. They’re all victims. Got it?

Marxism’s intellectual vanguard knew the American people would never adopt such a radical political system organically. However, Italian Communist philosopher Antonio Gramsci had proposed a radical new strategy to bring about Marxist revolutions in the West: subvert the culture. “Such a revolution would be an extended campaign for hegemonic influence among the population at large; once this was attained, political power would be essentially at hand and many of the conditions of the [sic] socialism would already have been realized,” Walter L. Adamson explained in Hegemony and Revolution: Antonio Gramsci’s Political and Cultural Theory (1980).

Sadly, the Marxists are on the final leg of their long march. America’s institutions have toppled like dominoes.

Hence, the radical left embarked on an all-out blitz to infiltrate and gain control over America’s culture-making institutions: Hollywood, the media, corporations, foundations, the university and public education systems, professional sports, etc. Marxist activist Rudi Dutschke dubbed this strategy “the long march through the institutions of power.” In a 1968 speech, Dutschke proclaimed: “Revolution is not a short act when something happens once and then everything is different. Revolution is a long, complicated process, where one must become different… But the process of change goes along this way, which I have named ‘The Long March Through the Established Institutions.’”

Once in control of America’s culture-making institutions, the left would begin to propagandize the public with divisive messages such as: America is a systematically racist country; white people are born with unconscious biases and are inherently racist; saying “all lives matter” is racist; men have periods too; etc. Before we knew it, the Duchess became a victim and football became gay.

Sadly, the Marxists are on the final leg of their long march. America’s institutions have toppled like dominoes. It is now considered fashionable for colleges to hold segregated graduation ceremonies; for airlines to hire pilots based on skin color, not aptitude; for banks like JP Morgan Chase and Goldman Sachs to consider skin color when making loans; for professional football to proclaim a sexual preference; for military generals to assign phony medical conditions to entire races of people. (Yes, even the U.S. military appears to have fallen to the Marxists).

Try watching a Hollywood award show or a Team USA women’s soccer game sometime. Go visit your child’s college campus. You will not see a celebration of America’s unifying principles: liberty, equality, individual rights, patriotism. Instead, you will see an indictment of this country and a rejection of its founding principles. You will see divisions being stoked along racial lines.

But you must look closely. As Rod Dreher points out in Live Not By Lies (2020), the left’s divisive messages are carefully camouflaged in friendly-sounding patois like “diversity,” “equity,” and “inclusion.” Dreher writes:

Chinese Americans who survived Mao’s Tse-Tung’s Red Terror, survivors like Xi Van Fleet, have called Critical Race Theory an “American version of the Chinese Cultural Revolution.” Van Fleet understands that this kind of demonizing rhetoric serves a purpose: it is the social lubricant that facilitates the use of violence against those who resist the Marxist revolution. Using violence against dissenters is considered just because dissenters are cast as evil.

We can only pray that America wakes up before this radioactive ideology consumes her; before her melting pot society descends into a Balkanized, tribalistic society, comprised not of unique individuals, but of interest groups competing for resources; before her promises of inalienable rights, equality under the law and freedom of speech are tossed aside in the name of “social justice”; before her citizens fall victim to an ideology that has caused the deaths of over 100 million people in the last century alone.

This article is part of a Human Events Opinion Special Collection, “RESURGENT COMMUNISM.” You can read the other pieces in the collection here.