CHARLIE KIRK: Attention, World Citizens– The Role of God Will Now Be Played by the Men in Davos 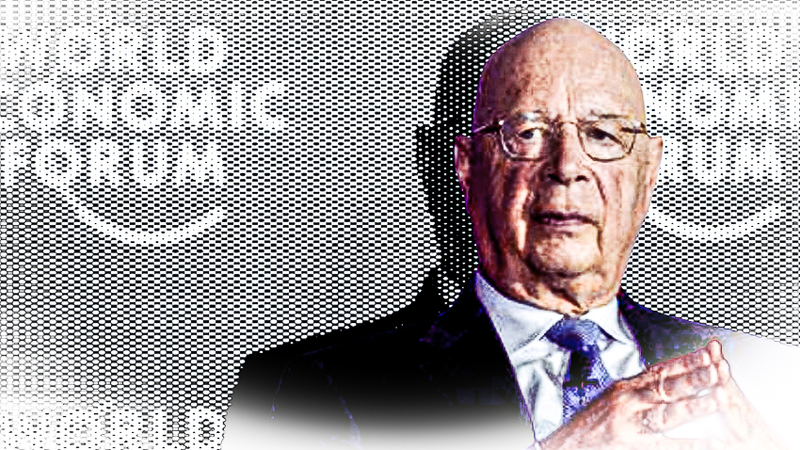 klaus
"In the Bible, in Genesis, basically the first thing God does is to create animals and plants and humans according to his wishes. We are now trying to gain this divine ability ourselves. It's very likely that in the 21st century, the main products, the most important products, of the human economy will no longer be just vehicles and textiles and food and weapons. The main products will be bodies and brains, and minds. Because the gods like Jehovah in the Bible, they could create only organic beings. If you look, if you're a creationist, and you look at the world, so all these animals, all these plants, God created them and therefore organic. Now humans are trying to do better than that."


While the country obsesses over the classified files scattered about the Biden residence much like wind-blown cocaine (I assume Hunter visits), there is something much bigger going on this week over in Davos, Switzerland. That is the annual meeting of the World Economic Forum, where leaders from around the world gather together to decide what is best for us. Now, if you are skeptical of the abilities of some relatively small group of people to make such determinations on behalf of all humanity, fear not. There was only one God, and look at all He was able to accomplish. Imagine the power of a group of self-declared gods in the 21st Century. They have all of man’s accumulated knowledge and cutting-edge technology at their disposal. God’s tools were primitive when compared to theirs.

Over the past year, I have devoted considerable airtime to discussing the WEF and its machinations, in particular what was termed “The Great Reset” by Klaus Schwab in his book from 2020 of the same title. It was in that work that Schwab essentially made the argument that the pandemic had created both the need and the opportunity to move toward an international realignment of sorts, one that placed the nation-state in a backseat role to the global community and one that set aside individual wants and needs and substituted for them a subservience to the “general will” of all.

There was nothing new about the few seeking to control the many. That is the history of man. All that was different about Schwab’s vision was the time and place, along with the technology attendant to it that makes it easier for the few to keep track of and control the many.

What is new, is that these people in the WEF are Godless creatures who seek to cast themselves in that role.

If you look back at the great despots of the 20th Century, Mao, Hitler, Stalin, and Pol Pot– the one key thing that they all had in common was that they did not have any belief in God. They saw themselves as being unaccountable to any “higher power.” Being unconstrained by consequence, they were then free to roam about the planet murdering at their leisure.

To the best of my knowledge, however, none of these evil men actually claimed that they were replacing God. If they did, it wasn’t part of their stump speech. The folks at the WEF are taking global domination up one level. Consider this from Harari:

"Next, projects of humankind will be to overcome old age and then to find the keys the secret to happiness and to basically upgrade humans into gods. I don't mean it as [a] kind of literally [sic] metaphor a minute in the literal sense."

There are two general truths upon which people of virtually all mainstream religions agree: a) There is a God, and b) We are not Him. Messrs. Harari, Schwab, et. al. would take issue with that, at least to the extent that they are saying, “But we can be.”

The goals and agenda of the WEF are extensive and invasive, and they hide in plain sight on the organization’s website. A discussion of them here is not my purpose, but for anyone interested in reading further, they can visit TPUSA’s website and order a copy of The American Response to the Great Reset wherein the agenda and the history of the organization are explained. As nefarious as the organization’s mission might be, the question that needs to be asked is this:

Should any agenda of any organization not be feared when it is being promulgated by men who seek to be gods?

The United States has a very large delegation present at this event. I say that because it includes Illinois Governor J.B. Pritzker who by himself makes any delegation of which he is member “large” by definition. In addition to Governor Fauntleroy, who might do well to take the WEF’s suggestion that man dine on insects, other notable elected-office attendees include Michigan Governor Gretchen Whitmer, Georgia Governor Brian Kemp (Yep. Republicans like this stuff, too), Senator Joe Manchin, and Republican House member Mike Gallagher from Wisconsin, a curious attendee given his hawkishness on foreign affairs.

We also have non-elected folks in attendance like John Kerry (who served in Vietnam), and FBI Director Christopher Wray. While it is nice to see that the FBI chief is taking a week off from terrorizing patriotic Americans here at home, one does have to wonder what reason the head of our national state police force has for attending such a conference. Perhaps he missed Church on Sunday and needed another alter at which to worship?

There are others, but simply take away the point that this is not some “fringe” movement. It isn’t Woodstock for God-complex sufferers. These are real people with real power. Imagine if 1984 and Brave New World had children together. These people are those children.

The world takeover by these psychopaths suffering from delusions of grandeur is hardly a fait accompli.  CNN commentators have expressed worries that the agenda of the WEF is in danger of receding. They published an article expressing concern that hopes for globalization might be slipping away. Indeed, numerous WEF supporters expressed concern in mid-2022 after Russia’s invasion of Ukraine that the bold military action could damper hopes for a sort of new world order. It is as if those involved feel that in terms of its move toward one world government, humanity is stuck in puberty; no longer a child and not yet fully developed. Let’s hope their fears are founded and that collectivist hormone blockers can be administered. The problem is it is hard to stop anyone who thinks they are a god.

Let me stress this point because it simply cannot be stressed enough. The members of the WEF are seeking to create human beings in their own likeness and image. They are not trying to create them by indoctrination, they are seeking to literally create them, “create” being a term used in Scripture to reflect only the work of God.

The German philosopher Friedrich Nietzsche, of ubermensch (super man) fame, is known by few and read by fewer, but most people are familiar with his famous phrase, “God is dead.” The phrase isn’t actually Nietzsche’s originally, he borrowed it from another German Philosopher Georg Friedrich Hegel who, in turn, had “lifted” it from a Lutheran hymn. What Nietzsche meant in the phrase was that God was dead because man had killed him. We had turned into a secular society where people were no longer as willing to turn to an imaginary being, that of their own idealized creation, as a means by which to find hope in this life.

Nietzsche saw this as potentially emancipating, a move away from mysticism toward a place where man could come to realize the full power within himself; to become an ubermensch.

What neither Nietzsche, nor Hegel, nor anyone with a sane mind would have suggested was that in the stead of the God that man had supposedly killed, a group of elitist, overfed, self-described visionaries would declare themselves to be the new gods.

In the Book of Genesis, we are told that after God finished creating the world in six days, “by the seventh day, God had completed the work that he had been doing,* and he began to rest on the seventh day from all his work that he had been doing.” I sure hope He is rested. He has new rivals in the shape of the members of the WEF…and they are legion.