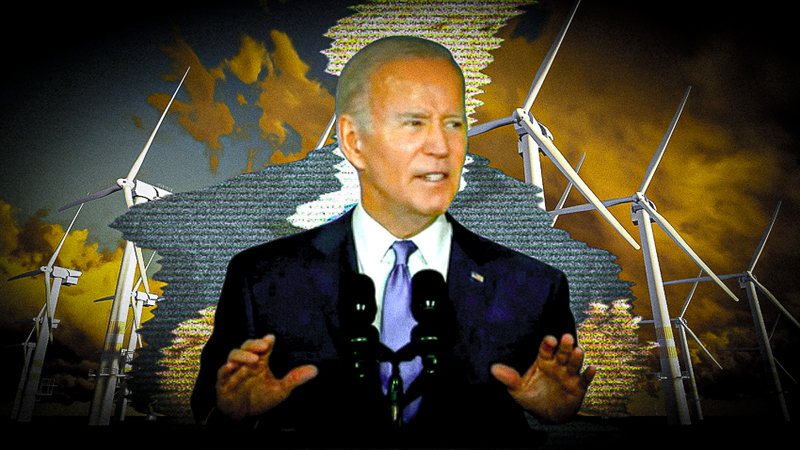 Biden Wind
President Joe Biden’s plans for offshore industrial wind facilities lining the nation’s coasts have some series hurdles to clear before they can become reality.

As part of his plan to reduce U.S. greenhouse gas emissions 50 percent below 2005 levels by 2030, Biden has initiated efforts to build 30,000 megawatts of traditional offshore wind facilities (with structures attached to the ocean floor) in federal waters by 2030, and an additional 15,000 megawatts of floating industrial offshore wind by 2035. To reach those targets, the Biden administration is pushing to lease areas in federal waters in the Gulf of Mexico and Gulf of Maine and off the coasts of New England, the Mid-Atlantic states, North Carolina, South Carolina, California, and Oregon.

The problem is Biden’s green energy dream is a nightmare for consumers, who will get hit with much higher energy prices.

Economics alone should have doomed offshore industrial wind facilities from ever being considered.

Offshore wind is absolutely the most expensive source of electric power being considered anywhere, and it is far from reliable, as well.

The heavy reliance on offshore wind facilities for electricity is one reason why the United Kingdom now has the highest electric power prices in the world. Unlike markets, where price hikes almost always ensure supplies increase to meet demand and thus ultimately reduce prices, wind power is not dependent on incentives but on nature. Despite high prices, the United Kingdom and many European nations have suffered energy shortages when winds over the North Sea went calm during the summer and left turbines dead in the water for days or weeks at a time.

Let’s examine the comparative cost. Before generous federal tax credits and other federal and state support, the levelized cost of electricity from new offshore wind is $136.51 per megawatt hour (Mwh), according to the U.S. Energy Information Administration. Even if new gas pipelines had to be constructed, natural gas could provide energy in place of Biden’s offshore wind monstrosities for a fraction of that cost. In addition, jobs from natural gas production and use don’t have to be subsidized by taxpayers because those companies do not rely on government support for continued operation. Unlike most green energy companies, they make profits and pay taxes instead of consuming massive subsidies courtesy of the American taxpayer.

If you reject natural gas out of hand because it produces greenhouse gases at the point of generation, either solar at $36.49/Mwh before tax credits or onshore wind at $40.23/Mwh would be a much better deal for taxpayers and ratepayers than offshore wind.

The poor, minorities, elderly, and those on fixed incomes will ultimately suffer the most as their power bills skyrocket, if Biden’s offshore wind plans come to fruition, not the wealthy elites pushing these schemes. More than 20 million American households are currently behind on their utility bills, due in part to the Biden administration-induced energy price rise. Proposed offshore wind megaprojects will only exacerbate this problem.

Offshore industrial wind facilities are nothing more than big virtue-signaling boondoggles—a windfall (no pun intended) for the politically connected companies that build and operate them. The offshore wind projects being considered up and down the Atlantic coast of the United States pose a clear and present danger to ratepayers there.

By itself, the impractical economics of offshore wind projects should consign these projects to the dustbin of history. Unless and until these technologies can deliver reliable power at an affordable cost, they should remain off the table as viable alternatives to fossil fuels.

H. Sterling Burnett, Ph.D., (hsburnett@heartland.org) is the director of the Arthur B. Robinson Center on Climate and Environmental Policy at the Heartland Institute, a non-partisan, non-profit research organization based in Arlington Heights, Illinois.