LIBBY EMMONS: Neuralink Seeks to Transform Human Beings Into Simply Another Data Port in the Internet of Things 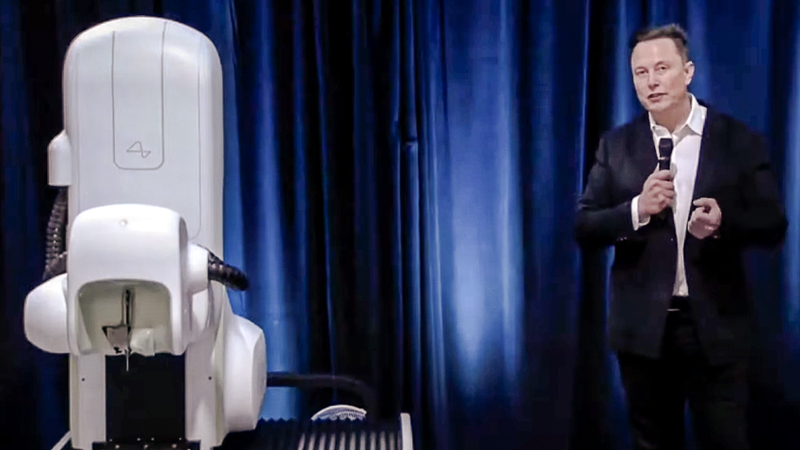 Neuralink is coming, and it won’t be pretty. The device, which offers miracle cures for paralysis, also ushers in a new era of human-to-machine interface that has so far primarily been the dark fantasy of dystopian fiction.

The idea is a noble one, and it belongs to that purveyor of grand ideas, Twitter, Space X, and Tesla CEO Elon Musk. Twitter may usher in a free speech revolution, Space X promises to normalize consumer space travel, Tesla offers self-driving cars, but Neuralink offers an evolution into a new kind of human.


The human of Neuralink is neither human nor machine but a hybrid, and combination of thoughts and gears, for whom thoughts do not generate only from the mind, but can be generated externally, by a device plugged into the brain and affecting internal intellectual interactions.


The device is straightforward enough, and the implications for the disabled are rather staggering. Neuralink is a brain-computer interface, or BCI. At present, human beings interface with computers through the intermediary of both the human body and the computing device. We type with our fingers onto a keyboard, we see the computer screen with our eyes, the body remains separate from computer, and computer stands alone from human being.

With Neuralink, those intermediaries of body and device are done away with, and what remains is a direct connection between thought and data. While the current interface allows information only to be input one way, i.e. humans input commands to a computer, Neuralink will allow two-way communication.

Just as a smart fridge can communicate with local supermarkets and let you know where you can go to restock your soy milk and avocados, Neuralink will be able to communicate with your thoughts to provide data that you have thought of, perhaps, but not sought out. The obvious example of this would be the grand scale of something we already experience, such as doing an internet search for an item only to then be bombarded with ads for that item across social media platforms, but it could also be far more insidious.

Imagine a dissident in an oppressive nation thinking about the best ways to protest Covid lockdowns, for example, such as the Freedom Convoy protestors did in Canada, or the White Paper Revolutionaries in China. Imagine this person coming up with ways to protest, only to have censors tracking Neuralink interfaces to find that person, and then target them with alternative data to veer them into another direction.

Would the dissident know that their thoughts are being moved to align with an authoritarian agenda? Further, what kind of literal, actual thought control could be implemented by the makers, managers, and algorithm creators of Neuralink or the associated apps and software that will likely come along with it? Just as Apple restricted its AirDrop function during the anti-censorship White Paper protests in China, so too could Neuralink interfere with the thoughts and data streams, both input and output, of those seeking to protest oppression, suppression, and censorship worldwide.

That is a distinct possibility, and considering the imaginings for the product, which go far beyond simple medical miracles, it is assuredly on the way. The possibilities for authoritarian control of human beings is multiplying.

If self-driving cars and a central digital currency are linked to brains, how hard would it be for a social credit system to become a thought control mechanism where those who think anti-government thoughts, or thoughts that contain what authorities have decided is "misinformation," could be limited from making purchases, could have their freedom of movement restricted, until their thoughts are altered with curated data that complies with regulators and authorities?

It sounds crazy, but so too did many ideas that have become reality in recent years.


“We are now confident that the Neuralink device is ready for humans, so timing is a function of working through the FDA approval process,” Musk said on Twitter in response to an article reporting on the increasing functionality of the device.

“Jesus, Elon, I hope you know what you're doing,” Dr. Jordan Peterson replied to Musk.

Peterson is one of the few thinkers on planet earth right now who values human beings and all their glorious potential as they are, without interference from a device or machine. He speaks of the struggles and trials human beings face, while marveling at our innate ability to solve our own problems, to reshape our outlook inside ourselves, to fathom deep questions, both tap into and recognize meaning internally and externally, and live lives of promise, kindness, and utility.

It is because of his love for humanity that Peterson recognizes the inherent pitfalls for humanity with the emergence of a device like Neuralink. Neuralink was one of the three undercurrents of transhumanism I noted in 2018 when writing for Quillette, along with body hacking and transgender ideology. Each of these has the potential to transform humanity into something transhuman, something that is neither human nor machine, but a combination of the two.

Transhumanism, the idea that human beings should undergo an intentional evolution with the help of technology toward both longevity and transformation, is a concept that rests on the idea that the human body, in its current form, is not the best vehicle to carry humanity into the future.

Neuralink is a perfect example of that. With this device, human beings will be able to interact with data directly. Data will flow in two directions. Imagine a Neuralink interface between brain and mapping software like Google Maps, or between brain and a device like Siri or Alexa, or billions of Neuralinked individuals linked in the Metaverse.

Where does thought end and data begin? Will there be any way for human beings to understand the difference between their own thoughts and the data that is fed into those thoughts?

The human mind is infinite in possibility, while data, despite appearances, has its limits. Additionally, data is often created for a purpose. Advertising, for example, or propaganda from politicians and leaders. Imagine an anti-misinformation or disinformation initiative such as the kind we recently saw with Covid, Ukraine, climate change, or take your pick of popular propagandas, but instead of humans being able to look at all the data provided, take that data, think about it, and then express a thought, the data is already part of the mind, indistinguishable from thought.

How will a human being be able to weigh data, and perspectives, and create their own thoughts and ideas if there is no way to tell the difference between one’s own thoughts and the data which streams persistently from a hive mind link? We can put down our smartphones, shut down our laptops, but will there be any way to turn Neuralink off?

Musk has as part of the vision for Neuralink that human beings can all be connected through a network of Neuralinks. Each human being will simply be another data port, another node, another input in the vastly growing internet of things, but we won’t be human.