POSOBIEC and LIBBY EMMONS: The 'Muskening' Is Now in Full Swing as Twitter POWs Are Released 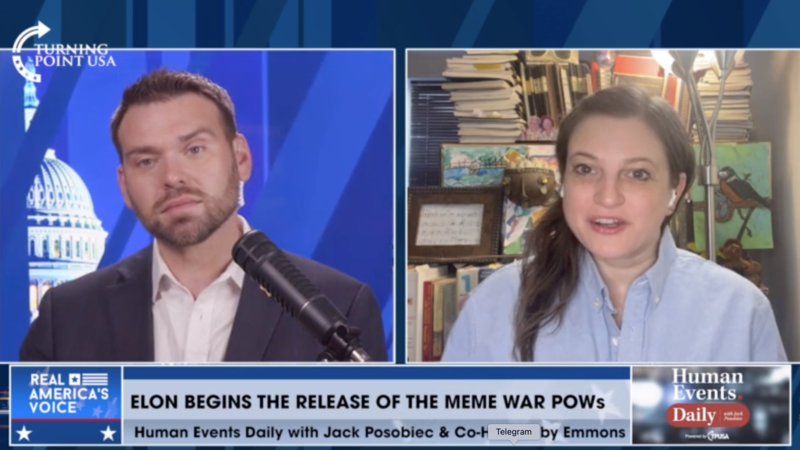 Human Events Daily host Jack Posobiec broke down the "Muskening" of Twitter, as several high-profile accounts were unbanned over the weekend, including that of former President Donald Trump.

"The Muskening of Twitter," Posobiec said, "Over the weekend, as many people saw, Elon Musk restored the account of President Donald J Trump to Twitter. Trump has failed to tweet, he's holding back and saying, I'm not going to do it. That doesn't surprise me. He's got Truth social going, and of course, he loves to keep people guessing. He loves will he, won't he... That's where exactly where Trump wants you. He wants you in his world, and that's where we all are now."

"Musk is tweeting memes, trying to get Trump back on. But, in addition to that, he's also bringing back lots of other conservative accounts and a few other liberal accounts as well, but of course, there aren't that many liberal accounts to bring back, and that's a function of the fact that only one side, under old Twitter, ever had the rules applied to them, and only had the rules applied to them in such a broad and sweeping manner, and that was conservatives and, in particular, Trump supporters. If you're a Trump supporter on Twitter, the rules applied for you in a way that they never applied to anybody else. One word, one sentence, one phrase is taken out of context or said in any way, in jest or sarcasm, you're zapped forever."

Posobiec said that the Muskening was in full swing, with Emmons listing off those who have been allowed back onto the platform, including Georgia Congresswoman Marjorie Taylor Greene, James Lindsay, the Babylon Bee, Dr. Jordan Peterson, Project Veritas, and Meghan Murphy.

Posobiec then spoke about meme war veteran ALX, who when asked if he had an appeal process to being suspended, the answer was a resounding no.

"Perhaps something that we're looking at... Perhaps over the weekend, a lot of these high profile bans were overturned, and people are only now just finding out when they check various accounts to see if they've been unlocked."

Emmons said that Twitter doesn't appear to be making a big deal about the process, and that it is bringing people back on that shouldn't have been banned in the first place.

"One thing I do have to say, though, ... He has said that he doesn't want to bring back Alex Jones, and the reason to that pertains to Sandy Hook. He had a very emotional response when he talked about his own first son dying, he said 'if Alex Jones exploits the death of a child, I've experienced the death of a child, it's too much for me.' That seemed like a personal decision, that was based on his own personal feelings, and that gets me to the point that I'm thinking, it's not so much that Twitter has direct policies, it's that Twitter has a king, a monarch," said Posobiec.

Emmons agreed, saying that Musk shouldn't allow his personal feelings to get in the way of his decision-making.

"Alex Jones has apologized repeatedly for the comments that he made, and I think that everyone gets a chance of redemption. That should apply to Alex Jones, as well," Emmons concluded on the matter.
poso libby