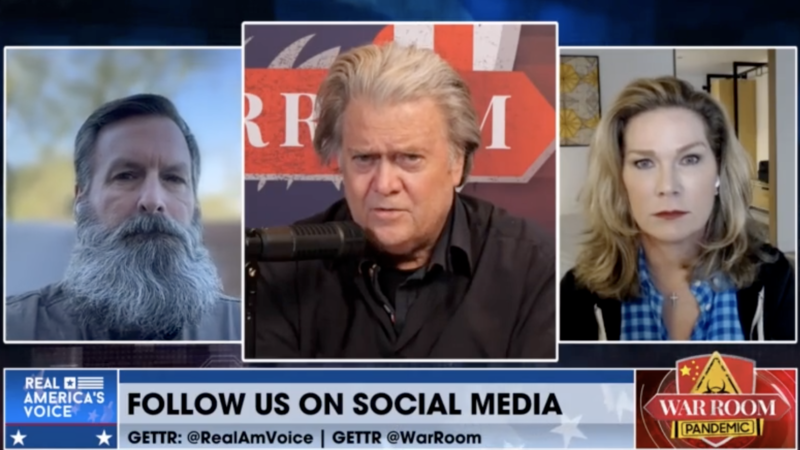 On Friday's episode of War Room, host Steve Bannon spoke with True the Vote leaders Catherine Engelbrecht and Gregg Phillips, who were released from jail on November 7, after being held there for over a week for refusing to reveal a confidential informant.

The pair spoke about what they say was their own wrongful imprisonment, with Engelbrecht telling Bannon, "We were put in prison because, one week before the midterms, we needed to be silenced." She explained how True the Vote outed election software firm Konnech, which is "the snowflake on the tip of the iceberg. There is so much more yet to come," in terms of corruption in the voting systems according to Engelbrecht.


The Michigan-based company, Konnech, alleged that True the Vote made "baseless and racist" accusations against CEO Eugene Yu. Konnech, a company which provides software to elections offices regarding poll worker management, filed a civil suit in September over the matter. Yu was later arrested and charged by the Los Angeles district attorney for allegedly storing government data about American poll workers in China. LA officials reportedly received their initial tip regarding Yu from Phillips via the informant. Engelbrecht and Phillips testified that identifying the confidential informant would put his life at risk and were held in contempt for their protection of the informant.

Phillips and Engelbrecht had claimed that Yu was an agent of the Chinese Communist Party, and that the country had been using poll worker data to influence the 2020 election.

"Is it your belief, Catherine Engelbrecht, that the Chinese Communist Party is a competitor to the United States, or is it a sworn enemy and an existential threat to the Chinese people and to the citizens of this country?" Bannon asked.

"China is an existential threat to this country. And what we have uncovered extends well beyond just elections. It extends into public schooling, into some of our finest universities, into military, into government telecom," she answered.

"Our processes are being subverted, hidden in plain sight," She added. "And the fact that the federal government under the Biden administration won't take a stand to stop this. and in fact is covering it up, is treasonous. It's treasonous."

She added that her jailing along with Phillips' helped to obfuscate the corruption embedded in the voting systems across the country.

"The American people need to see what is happening," she said. "They (China) are not our competitors. They are stealing, stealing our elections and, all the way down the line, is that technology that has to be known."

Bannon said that others could criticize the pair for going "full tinfoil hat mode" in terms of crediting the CCP with such deep influence in American elections and asked Phillips to comment.

Phillips asked if sensible people really did not consider the CCP the threat that they are.