GAYS AGAINST GROOMERS: Why 'Groomer' Is NOT an Anti-LGBTQ Slur 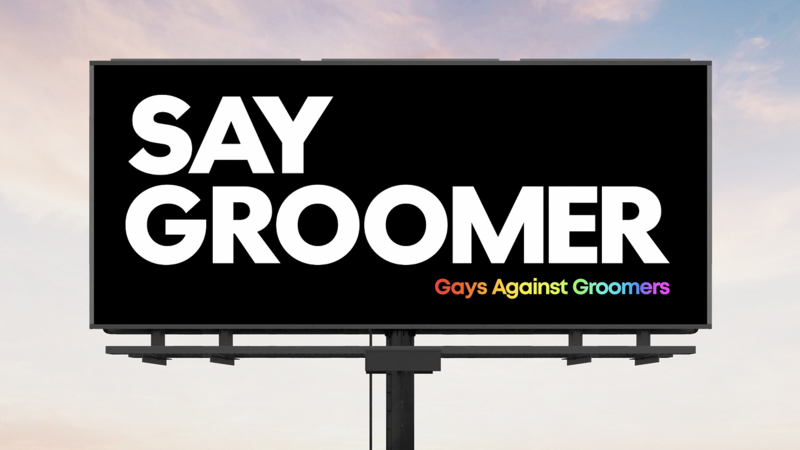 The English language is a funny thing. Over time, some words are forgotten, changed or used differently, and others are invented to replace them. The majority of native English speakers likely don’t stop to contemplate their own ever changing language, but anyone learning English knows how confusing it can be to understand the rules, nuances of slang, and how one word can have different meanings depending on the context.

For example, when one hears the word ‘coyote’ the image of a small wild dog likely comes to mind. But this word is also used colloquially to denote a person who smuggles immigrants across the Mexico–United States border. The ignorance of many was put on display in 2020 via Twitter when Trump used this word to refer to child trafficking, mocking him as though he’d just implied an actual wild dog was dragging children across the border in its teeth.


In 2022, with technology in full swing, the English language is undergoing another transformation. Words are not only being invented, but traditional words the public thought were concrete are being changed and manipulated in real time by the mainstream media, Webster's dictionary and even the CDC. Much like Orwell’s 1984, it seems certain definitions are changed specifically to pull the public opinion into something more acceptable to an increasingly sensitive society.

One of the words caught in this Orwellian tug-of-war is ‘groomer.’ While this term can innocently reference an act of self care (i.e. combing your hair, taking a shower, using a face mask etc.), or trimming a dog’s fur coat and nails, it has another definition that many are attempting to change and even censor. Reddit and Twitter have both expressed a ban on the word, recklessly claiming it is an attack on the LGBTQ community.

But why? The term ‘child grooming’ has always been used to describe the process a predator goes through to befriend and establish an emotional connection with a minor, and sometimes the child’s family, with the objective of sexual abuse, including but not limited to: trafficking, prostitution, the production of pornography and cyber trafficking. Unless the people attempting to change and censor this word truly believe all gay or transgender people are predators, why on Earth would this word be considered an attack on their community?

Convicted pedophile Jack Reynolds, who spent more than 12 years in prison for molesting around 300 children in the 1980’s, agreed to sit down with ABC news in 2017 to discuss his own techniques in hopes of educating the public on how to tell if a predator is after your child. He himself used the term ‘grooming’ to describe the process he went through with his victims.

While his interview is disturbing, his insight helps the public understand just what goes on in the minds of these child groomers. Reynolds’ final warning was how dangerous social media is, since it facilitates and expands a predator’s reach in a way society has never seen before. Thanks to platforms like Instagram, SnapChat and Twitter, predators have an easier time grooming children than ever. Predators can freely pretend to be someone else and convince minors to send them sexual materials or meet them somewhere. This evolution, though hard to digest, is important to be aware of when it comes to the safety of children in the modern age of technology.

Now more than ever, predators are increasingly difficult to spot. They have access to an infinite catalog of potential victims at their fingertips, as well as numerous ways to disguise themselves and blend in with certain communities in order to gain access to minors. Unfortunately, one of these communities they’ve chosen to hide in is in fact the LGBTQ community. Donning an alternative identity is allowing predators to function like a wolf in sheep’s clothing. More and more we are seeing stories of so-called “transgender activists” and even drag queens who are arrested or have already been arrested for sexually abusing children or possession of child pornography.

In addition to these predators finding safety in the LGBTQ community, they have become more difficult to call out, noticeably because the mainstream media always seems to come to their rescue, placing them on pedestals and giving them platforms. Suddenly convicted sex offenders are being celebrated in media and given places to speak or perform, often around minors. Why? Because they choose to disguise themselves as drag queens, transgender, or something in between in order to appeal to the ‘queer’ community.

The History of the Word Queer:

Once upon a time, the word ‘queer’ was a derogatory term referencing gay people. It was considered a slur, something spat at people who were different from the norm. If you look up the word in a thesaurus, you’ll see a range of synonyms that include: irregular, puzzling, weird, mysterious, unbalanced, unhinged and more. The community has since “taken this back,” adding it to their alphabet and using it proudly to describe themselves. But some old-school gays who grew up in the era when ‘queer’ was a slur aren’t so quick to love its transformation.

It’s one thing to take a slur back and embrace it, but to claim a term traditionally used to describe predators is now a slur is a dangerous move. When we attempt to censor language in this way, it creates a roadblock in which one must circumnavigate in order to find a new way to define something sinister that was once easy to spot.Attempting to associate the word ‘groomer’ with the entire LGBTQ community is both inaccurate and harmful to those who just want to live their lives.

So why the confusion? Why the attempt to associate ‘child grooming’ with our entire community? Well, the obvious conclusion is that they use us as shields to silence all opposition to their agenda; claiming it’s hate speech to criticize those preying upon children. It is a tactic to support predators in their endeavors and normalize pedophilia, which we are dangerously close to now.

What some fail to realize is the public is experiencing grooming on a mass scale. We are being groomed to accept these predators into our community, and even told to call them “minor attracted persons” to spare their feelings. Teaching children advanced adult material and exposing them to adult spaces is grooming them for predators, which is something many parents seem to be completely oblivious of when they take their kids to watch a half naked man dressed as a woman dance provocatively in the middle of the day.

It is a slippery slope that ends in adult-child relationships normalized in the mainstream. After all, the younger they learn about gender and sexuality, the easier an adult can claim they are “mature enough” for a relationship with anyone older than them. Predators are having their work cut out for them in the form of early, detailed sexual education for minors at a completely inappropriate age. The ideologies coursing through the education system and mainstream media are encouraging a dangerous curiosity in children that leads them straight into the mouth of the wolves.

Obviously, not all gay or even transgender people are predators. The attempt to label ‘groomer’ as an anti-LGBTQ slur is not only extremely harmful to our community, as it assumes all of us are groomers and/or support this depraved attack on children, but is also a conflicting association that can distract the public from finding the real predators, and instead inspiring them to accuse the wrong people. But a dangerous movement has begun, a movement ordering the exposure of sexual material to minors at inappropriate ages, and the encouragement of gender transition at a young, underdeveloped age. Children are more vulnerable than ever, looking to fit in and have fun with whatever glitters like gold. Predators know this, which is why they have infiltrated our community.

The modern day “Trans Rights Activists” are largely to blame for providing a safe space for predators to hide in. Once an understood rarity, these transgender activists are now attempting to encourage children to follow in their footsteps as early as possible. As the percentage of youth identifying as gay or transgender rises, many are being called “transphobic” for even asking why. Dr. Jane Clare Jones made an excellent point in a tweet from February 2022:

Women like Dr. Jones have every right to speak on the sudden shift in the community, and there is a reason many like her are upset. Instead of respecting boundaries, facts, and adult spaces, many in the modern movement are demanding blatant acceptance, disregarding the opinions of those they disagree with, and even attempting to change words to suit their own twisted reality. Dissenters are labeled “transphobic” for asking questions. Worst of all, they are dragging children into their dangerous delusions.

We at Gays Against Groomers will not let this happen. In fact, it's one of the reasons our organization was formed. We want to draw the line and protect what is left of the sane gay community. Not only are we against the indoctrination of children in schools through inappropriate education, we are against the medicalization and mutilation of minors as well, which could make them easy targets for predators on the hunt for vulnerable victims.

We were perfectly happy with what the community had already achieved before this dangerous shift occurred. Our minor demographic was already represented well enough, and acknowledged by many. We wanted to leave the children out of it. But it’s as though once we were federally allowed gay marriage, the narrative shifted and was harnessed by something dark and sinister that opened the door for pedophiles and child grooming.

The word ‘groomer’ is neither an anti-LGBTQ slur, nor a word to be avoided. It is the most appropriate word to describe not only what predators do, but what is happening to the public on a grand scale. There are those that aren’t even aware they have been weaponized to support this agenda, the same people attempting to demonize the word and gaslight those who disagree. Clearly, our organization is not offended by it, but it’s very telling who IS. It is obvious to us that the main reason this word is under attack is to serve the needs of those interested in normalizing the sexualization of children, and we will not allow that to continue.

So with that, we urge you to keep saying the word groomer, and don’t stop until this is all put to an end.