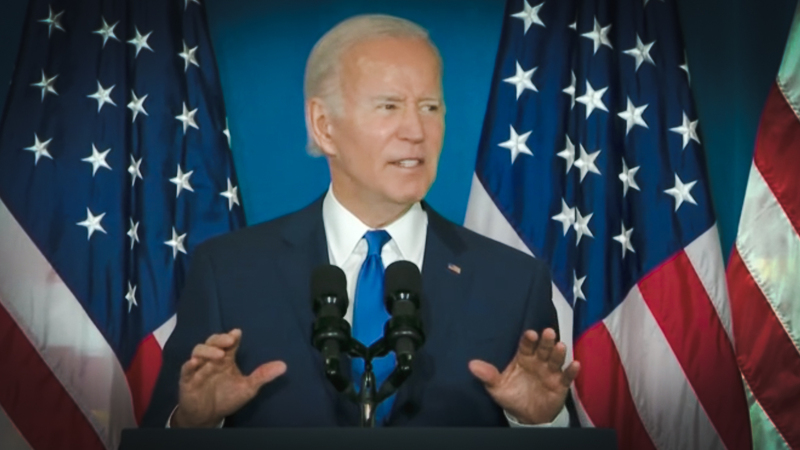 Biden
This article was originally published at The Post Millennial, a part of the Human Events Media Group.
*****

President Joe Biden gave a speech on Wednesday night in DC's Union Station, just days after the attack on House Speaker Nancy Pelosi's husband Paul in their San Francisco home. Biden claimed that "democracy is on the ballot," and blamed former President Trump for differences within the electorate.

"In our bones, we know that democracy is at risk," he said. "I ask you to think long and hard about the moment we're in. In a typical year we are often not faced with questions of whether the vote we catch will preserve democracy or put us at risk. This year we are. This year, I hope you'll make the future of our democracy an important part of your decision to vote and how you vote."

The speech, touted as "remarks on the state of democracy after attack on Paul Pelosi," was an opportunity for Biden to take aim at what Press Secretary Karine Jean-Pierre earlier in the day called "mega MAGA Republicans."

For Biden, the attack on Paul Pelosi was an opportunity to discuss political violence writ large, including the essentially non-existent "voter intimidation."

"We must, with an overwhelming voice stand against political violence and voter intimidation period. Stand up and speak against it," he said, as though this is something that is in some way controversial.

"We don't settle our differences in America with a riot, a mob, or a bullet, or a hammer," he said, before getting election day wrong, saying that it will be on November 9, then correcting himself.

Biden set the stage for a situation where America will not know the results of the midterm election for days after election day. He said that Americans must be "patient," because it takes time to count ballots.

Americans have long been used to finding out the results of elections on election day, or at least by morning. But for Biden and Democrats this year, they have been telling Americans that the results will not be known for days afterwards.

This speech, a follow up to his insanely divisive September speech in front of Philadelphia's Independence Hall, painted the Democrats' political opposition in similar terms.

He began his speech by discussing the attack on Paul Pelosi, saying that the man, David DePape, who has since been charged with kidnapping and is being held without bail, was seeking Nancy Pelosi, with the intent to hobble her.

After recounting the facts of the case, including that Paul had been beaten by the alleged assailant with a hammer, he compared that attack to the Capitol riot of January 6, 2021. He accused former President Donald Trump of inciting that riot, and barely stopped short of blaming Trump for the attack on Paul Pelosi.

Biden brought up what Democrats call "the big lie," otherwise known as the contentious claims and concerns about voter integrity after the divisive general presidential election of 2020. He pressed issues of voter suppression in Georgia, despite that state having the largest voter turnout in years.

He accused Republicans of lying, of a "conspiracy of malice lies repeated over and over to generate a cycle of anger, hate vitriol and even violence."

"In this moment, we have to confront those lies with the truth. The very future of our nation depends on my fellow Americans are facing a defining moment, an inflection point you must with one overwhelming unified voice speak as a country and say there's no place no place for voter intimidation or political violence in America," he said.

Biden said of the election "There's something else at stake: democracy itself," and cited polls where Democrats, primarily, have said that "democracy is at stake" in the midterm elections.

The primary thrust of this speech was to declare that the 2020 election was totally legitimate, and that "extreme MAGA Republicans, which is a minority that party as I said earlier," are election deniers whose views should not be listened to.

"It's estimated that they're more than 300 election deniers on the ballot all across America this year," he said.

He declared that democracy could not be taken for granted, and that autocracy, or "the rule of one," should not be permitted. Biden had issued more than 100 executive orders from the Oval Office, bypassing Congress to enact his own will.

"What we're doing now is going to determine whether democracy will long endure, in my view is the biggest of questions, or if the American system the prizes individual bends towards justice and depends, depends on the rule of law."

Biden, who has been on the stump across the country to endorse and pump the vote for Democrats, declared that "the fate of the nation, the fate of the soul of America, lies where it always does with the people, and your hands and your heart and your ballot. And fellow Americans will meet this moment."

The speech, intended to paint Republicans with the broad brush of the Capitol riot of January 6, to declare Trump the bad man, and to make sure Americans have low expectations for when they can hear the results of the midterm elections, was yet another campaign speech disguised as a presidential speech. Americans, however, know the difference.