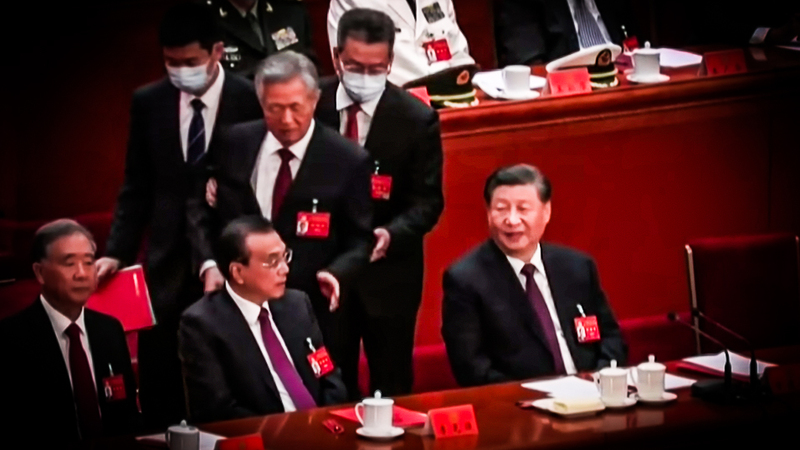 Bejing was the site of the 20th National Congress of the Communist Party last week, and from that congress, leader Xi Jinping emerged with dominance over the party, after removing opposing factions from the party entirely and changing the party rules to secure his dominance.

The changes to the party— the removal of all of Xi's opposition along with changes in party rules— are intended to keep Xi in power as long as he wishes. Russian President Vladimir Putin has offered his congratulations to Xi on his securing a third term. The two communist nations have a strong bond, while Xi has indicated that he may cancel the G20 meeting with US President Joe Biden.

In a visible display of control at the Congress, Xi sat calmly by as former President Hu Jitano was forciblly removed from the closing session of that congress on Oct. 22. Hu, who served as president from 2002 to 2012, was visibly upset as he was escorted out by staff. Hu's ouster from the congress was right before the final votes of that session were set to begin.

Sociologist Yang Zhang expressed these sentiments on Tiwtter, saying that "...Xi's grab of power is still beyond our expectation. He is now a truly modern emperor."

"Xi will rule China for not one but at least two and likely three terms (15 years)," Zhang stated, noting that Mao ruled until his death, and Deng Xiaoping ruled until his mid-80s. No successor has been named by Xi. "Old factions are all gone while new factions are in the making. Factional identities are flexible & dynamic," Zhang said.

Xi closed the congress flanked by his closest allies, the Politburo Standing Committee, indicating further his intention to hold onto power, even if it means silencing those who offer opposition. The members of that Politburo Standing Committee were all fresh faces for that body, save for Wang Huning, a close Xi ally who has been instrumental in the creation of Xi's political philosophy. Four of the previous members had retired, but two—Premier Li Keqiang and Premier Wang Yang—were pushed out leading up to the National Congress.

As Xi consolidated his power among his allies, ejecting those who could question his power or leadership, the Communist Party's charter was also amended to further facilitate Xi's extended rule.

These called on all party members to recognize that Xi is the "core" of the party and that his ideas for leadership, nation, and party are "key tenets" of party rule. All party members are further required, by these amendments, to "protect Xi's status as the core and to safeguard the party's leading role in politics in China," NPR reports.

"Hu was never as powerful as Xi is now," Foreign Policy reports, "his time in power was still in the era of so-called collective leadership, and he had to contend with the formidable influence of his predecessor Jiang Zemin. During Hu’s tenure, corruption rose—and more dangerously for the party, public coverage of corruption rose, as did freedom of speech online and, to a limited extent, civil society groups and NGOs. That wasn’t out of any great commitment to liberalism on Hu’s part but because most party members were more occupied with making money than with enforcing the party line."

According to the Sinica podcast, Xi doesn't have to worry about money as he comed from a very wealthy family. He also, Sinica reports, is haunted by the fall of the Soviet Union. Both of these things may play a role in his recent consolidation of power, which could see him as essentially a modern-day emperor to the end of his life.

Xi has indicated that Taiwan will be reunified with mainland China, and that he is not opposed to military actions to achieve that goal.