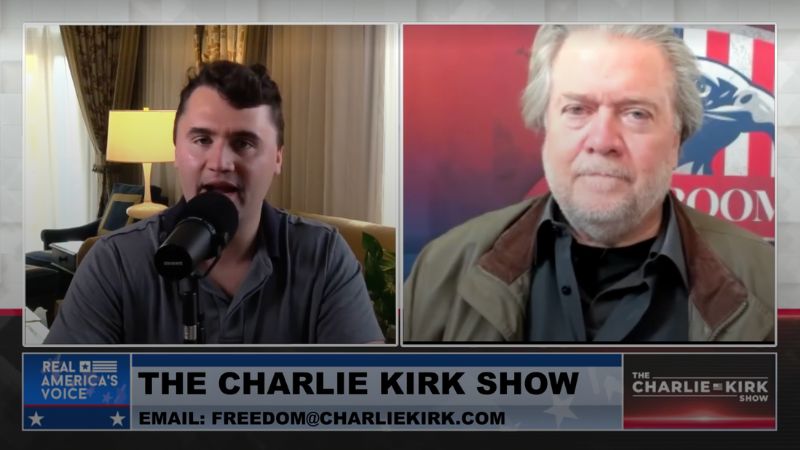 Walking Kirk through the morning’s decision, Bannon said, "I respect the judge, I respect the court, respect the process. You know, he laid out in his summary the four areas of appeal, we’re going to appeal in four different segments."

Bannon continued on to stress the importance of voting on Nov. 8 to "render judgment on the illegitimate Biden regime."

"Steve… what drives you to keep going?" Kirk asked. "You’ve been attacked from every possible direction, from the Muller investigation to the Senate Intelligence Committee, to the state of New York, to the Department of Justice, and you just keep fighting and you’re focused solely on election day as the Democrats’ judgment day."

Bannon responded by speaking of both his and his daughter’s military service, and himself meeting Andrew Breitbart amidst the economic collapse of 2008.

"What keeps me motivated, frankly, is you [Charlie Kirk], Posobiec, the people at Turning Point. I see this generation coming up and we have the obligation to bequeath this generation the same constitutional republic with the same basic economic opportunities that were bequeathed to us," Bannon said.

"I’ve had a blessed life," Bannon continued, noting that he had an "absolutely golden childhood," and that "I want to provide that and make sure that I’m part of that generation that hands that off.

Noting his work with War Room, Bannon added, "we owe our previous generations to bequeath to you guys, the up and coming next generation… the same country we grew up with, and we’re fighting for that. It’s not a given it’s going to happen."

"In fact, starting, as you remember, after the election was stolen in November of 2020, starting around January 20th when Biden stepped in, we have long odds."

"All of Wall Street’s against us, the universities are against us, big tech’s against us, Hollywood… the globalists, the World Economic Forum. But, we’ve got the American people and this participatory populism gets bigger every day."

Bannon concluded by saying that the midterm elections will be a "people’s victory" and "judgment day" for the Democrats, and that keeps him motivated.

On Friday morning, Bannon was sentenced to four months in prison and a $6,500 fine for contempt of Congress for not complying with the subpoenas from the January 6 Committee due to executive privilege invoked by President Donald Trump regarding their communication. Bannon's sentence has been delayed pending appeal.

Following his sentencing, Bannon addressed a crowd outside the United States District Court for the District of Columbia, as well as his viewers on War Room.

"By the way, I want to say one this, I respect the judge, the sentence he came down with today is his decision, I fully respect him. And I’ve been totally respectful this entire process on the legal side," he began outside the court building.

Bannon said that in all of these cases, he worked with his lawyers about the issue of executive privilege, and went and testified.

"And this thing about 'I’m above the law' is an absolute and total lie," Bannon added, saying that he and his team will have a "very rigorous appeals process."


Bannon continued on to state that "on November 8, there’s gonna have judgment on the illegitimate Biden regime, and quite frankly, then Nancy Pelosi and the entire committee."

"And we know which way that’s going, either they’ve already been turfed out like Liz Cheney, right? Or have quit like Kizinger and other of the Democrats, or they’re about to be beaten like Gloria and others, or they will lose their power and become a minority," he said.

"On November 8, the American people will reign judgment and we will prove, the Biden administration ends on the eighth evening of the eighth of November."

Bannon concluded by noting, "The Department of Justice, Merrick Garland, will end up being the first attorney general that’s been brought up on charges of impeachment and he will be removed from office."

As Bannon returned to the show, Posobiec and Bannon spoke of UK Prime Minister Liz Truss’ resignation on Thursday, stating that many of the issues seen by her short leadership are ones being seen by the Biden administration.