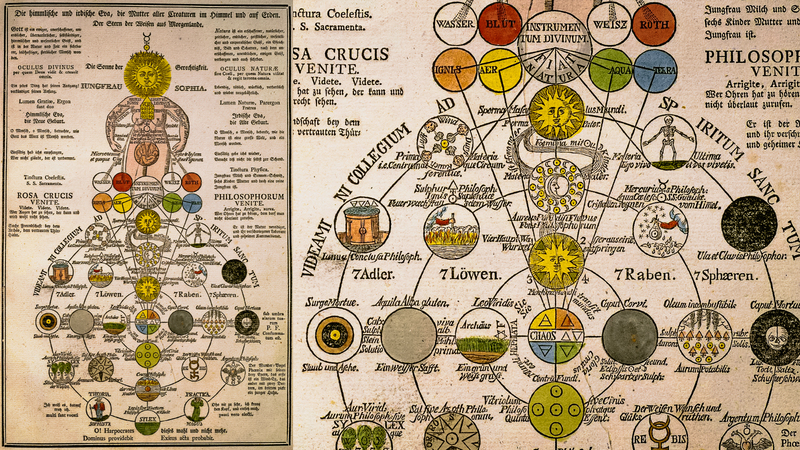 Gnosticism
The Gnostic belief that the soul is divorced from the body may explain progressive support for both transgenderism and abortion. It’s not a coincidence that those who believe that gender identity is divorced from biological reality are also likely to believe that a human fetus is not a human being. Both are at odds with basic biology and the Judeo-Christian roots of our civilization but congruent with the dogmas of the ancient mystical faith of Gnosticism.

Gnosticism is an esoteric religious movement with Platonic and Pagan influences that grew out of early Christian and Jewish sects beginning in the 1st century AD. Though regarded as heresy by the majority of Christians and Jews, Gnostic beliefs have influenced various religious sects, ideologies and philosophers over the last 2,000 years. More recently, and relevantly, Gnosticism served as the foundation for the ideas of Hegel, Marx, Marcuse and other neo-Marxists; and by extension, has substantially influenced the current-day mainstream left.

The central thesis of Gnosticism is that each individual is in possession of personal spiritual knowledge called “gnosis” (in other words, “my truth”), and that the object of one’s life is to pursue this personal truth in order to liberate one’s soul from the oppressive material world, which is viewed not as God’s good and true creation but rather an evil mistake. This is why the segregation of body and soul is an essential component of Gnosticism, because one of the chief ends of the belief system is to free the soul from the prison of the body.

Conversely, the traditional, Judeo-Christian view of human nature posits that body and soul are conjoined – that a human being is an inseparable unity of matter and spirit. Or, for the less religiously inclined, that your mind or your consciousness has only ever and can only ever exist together with your physical body and not as its own entity or in a different body because a different body would produce a different mind.

According to the Gnostics, however, the body is merely a meat robot and an individual is identified purely by their soul, which resides “inside” this otherwise meaningless bag of meat and bones.

In that sense, then, the Gnostic influence on transgender ideology is crystal clear: If an individual is identified only by his or her soul, and the soul is its own free-floating entity divorced from – though trapped within – the body, then it’s not a leap at all to say that one might be born “in” the wrong body.

But, of course, one can’t be born “in” the wrong body if one can’t be born “in” a body at all, as the traditional, Judeo-Christian and scientific worldviews hold. If the soul and the body are in unity, then the soul isn’t born into the body but rather with it. This is why many detractors of transgenderism not only view it as morally wrong, but also impossible.

Now consider the left’s position on abortion, where the Gnostic influence is less immediately apparent. In a way, the left’s justification for abortion is the polar opposite of its justification for transgenderism, but upon closer analysis, the basis for its positions on these two controversial social issues are opposite ends of the same Gnostic belief that body and soul are split.

Think of the “clump of cells” euphemism that the left uses to describe a human fetus. Isn’t that very similar to the Gnostic view that the physical body of an adult human is just a meaningless “bag of meat”? And according to the left, only once a baby is born – because then the lights are turned on, so to speak – is the baby human because only then is it conscious (or in Gnostic terms, only then is the soul “inside” of the body).

Justification for abortion rests on this claim that a human fetus isn’t a human individual yet, and the left believes this because in its eyes a fetus in the womb does not yet house a soul. (Most leftists of course wouldn’t say this explicitly, as they’re unaware of the Gnostic roots of their own ideology.) In that sense, then, to the Gnostic left, abortion is a sort of soul-sacrifice ritual – an act of “aborting” supposedly meaningless meat so that a supposedly not-yet-created soul doesn’t have to enter a world of suffering.

The pro-life, pro-biology movement must not depend on using mainstream euphemism-laden language that has been influenced by Gnostic dogma when defending its positions on abortion and transgenderism, but rather reorient the national conversation towards basic first principles. It must not surrender Truth to manipulative language by using terms such as “pregnancy termination” or “gender” but rather go directly to the heart of the matter, which is the Gnostic assumption that who you are and your physical body are split. That’s where our biggest societal disagreements lie – in a religious debate over human nature itself.

Ethan Peck is an associate for the Free Enterprise Project at the National Center for Public Policy Research.