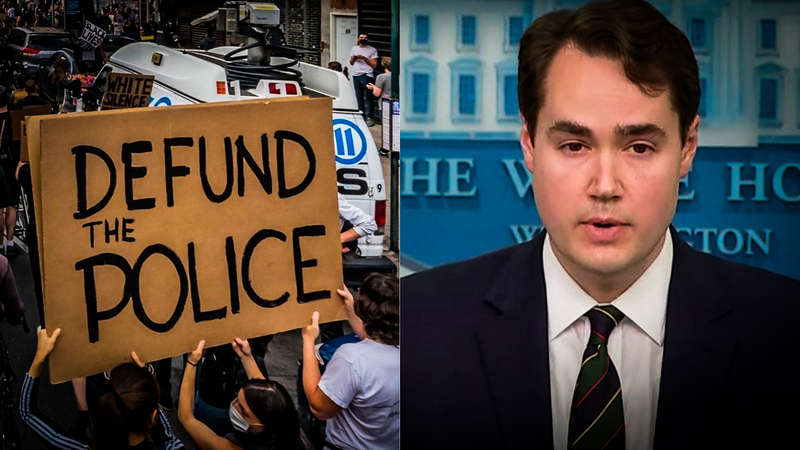 defund the police
This article was originally published at The Post Millennial, a part of the Human Events Media Group.
*****

The Biden administration is accusing Republicans of wanting to defund the police in the lead-up to midterms.

Fox News digital reports that White House Deputy Press Secretary Andrew Bates said Republicans "continually attempted to defund the police by voting to eliminate the COPS program the president created, and are even advocating to defund the FBI."

The false claim that the GOP wants to defund the police has been debunked by multiple sites, including the Washington Post. The claim originated with White House Press Secretary Jenn Psaki in the summer of 2021. In May of 2021, Fox News Correspondent Peter Doocy asked about the explosion of violent crime in cities after the BLM riots of 2020 and progressive policies, such as their defund the police movement.

Psaki claimed it was the GOP who wanted to defund the police, not Democrats because they did not vote for Biden's $1.9 trillion dollar American Rescue Plan, which had $300 million set aside for the COPS community policing program.

Bates' claim about the GOP defunding the FBI is a response to recent criticism over the Bureau's raid on Mar-a-Lago, seizure of Mike Lindell's cell phone, raid on a Pennsylvania pro-life supporter's home, and refusal to prosecute Hunter Biden, among other recent controversies the agency has been mired in.

In July, the Democrat-led House of Representatives passed an "assault weapons ban" that President Biden wants to sign into law but the bill is stalled in the 50-50 party split Senate.

"Devastatingly for the country, congressional Republicans have chosen the gun lobby over the fight against gun crime by opposing the assault weapons ban that the president and Democrats in Congress all support," Bates said. "They are literally siding with gun company profits instead of keeping Americans safe and preventing law enforcement from being outgunned."

A House GOP leadership aide replied and said, "For those keeping score at home, the same Democrats who tell you with a straight face that inflation is zero, the border is secure, and that men can get pregnant now want to claim they are the party that supports law enforcement and solving the crime crisis their policies created."

"The American people understand reality and see through their ludicrous claims," the aide added.

Starting in 2020, the defund the police movement captured the mainstream of the Democrat party and was lead by the "squad" in the House, consisting of Alexandria Ocasio-Cortez, Rashida Tlaib, Ilhan Omar, Cori Bush, Ayanna Pressley, and auxiliary member Jamaal Bowman.

In the wake of the Democrats' call to defund the police, along with other progressive policies like bail reform, crime skyrocketed to historic proportions.

The FBI released its annual report on national crime from 2021 and it shows that murder again is up 4.3 percent and all violent crime surged by 30 percent after 2020 and is holding at its increased number.

The FBI's statistics did not include accurate information from some of the leaders of the nation in crime, such as America's murder capital of New Orleans.
defund the police