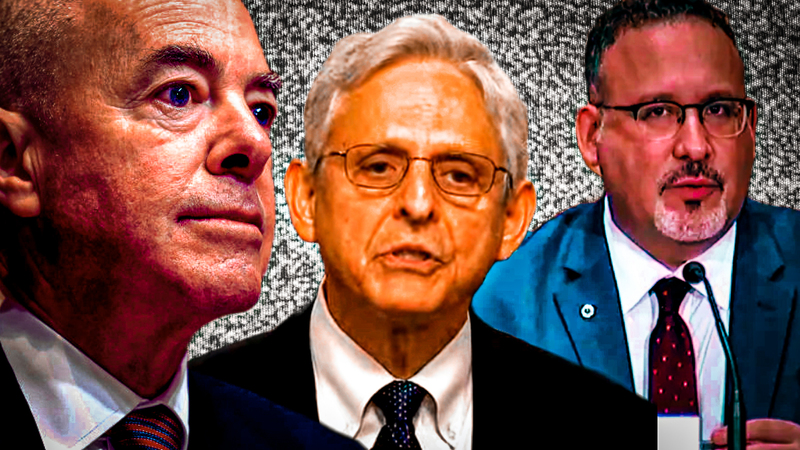 Deep State
All across the country, conservatives, Republicans, and MAGA enthusiasts (there is overlap, but not redundancy in drawing distinction between the three) are clamoring for the impeachment of Joe Biden should control of the House and Senate be taken in the 2022 midterms. While I cannot argue against the idea in principle, either stemming from his actions in office or simply as payback for what was done to President Trump, I believe I have a better idea.

We need to impeach the leaders of the fourth branch of government, the Deep State, the Swamp. Those three terms are synonymous, and they stand for the unelected bureaucrats who control the true power structure in this country.

Anyone who is confirmed by the Senate can be impeached. This means that those in cabinet-level positions are subject to being removed from office by a simple majority vote in the House and two-thirds vote to convict in the Senate. President Trump was impeached twice by the House and twice had the Senate fail to convict. Many believe that President Biden should be treated to the same level of humiliation. Unlike Trump, Biden certainly appears to be guilty of “high crimes and misdemeanors” based upon his dealings with China and Ukraine on behalf of his oh-so-prodigal-son Hunter. Trump was guilty of no such actions, his only crime being that of wanting to “drain the swamp.”

Ask yourself, where does the real power within our federal government lie today? Does anybody really believe it lies with Joe Biden? He is a puppet. It is simply undeniable after his calling out for recently deceased Congresswoman Jackie Walorski at a press conference on September 28 that he has dementia. He isn’t the one running the country. The country, like Biden himself, is being run by an administrative state so arrogant, so bold, that those inside of it feel like a collection of ubermensch, supermen and women with unlimited power who do whatever they choose.

My followers are filled with passion when it comes to discussion of impeaching Biden. It is a topic that presents every time I make a public appearance, and the passionate written demands fill my inbox each day. I get it. In a perfect world Joe Biden gets a cardboard box to clear out the Resolute Desk drawers and is sent off in disgrace to arts & crafts class at the senior home. We don’t, however, live in a perfect world. There is absolutely no chance, none, that Republicans will have enough votes in the Senate to convict Joe Biden and remove him from office. Yes, we might in the House, and, yes, like with President Trump they may be able to impeach Biden ceremoniously. That just might disgrace Joe Biden in the annals of history (depending upon who is writing the history), and it might damage his legacy, but I ask you this question: Twenty years from now, who are we going to be fighting, the ghost of Joe Biden or the administrative state?

A look at recent history would seem to make that question rhetorical.

Just look at what the administrative state has been doing to America under the watch of our Mel Brooks-parody President.  Today, here is who is running “blazing America.”

Attorney General Merrick Garland who has unleashed the full power of the federal police force to target parents who stand up against the hate speech of critical race theory, and to ransack the homes, arrest, and detain just about anyone who has the date January 6th show up on their refrigerator calendar. He also engineered an unprecedented smash-and-grab on the personal residence of President Trump that had federal agents seizing anything they cared to and playing in the former first lady’s laundry basket.

Homeland Security Director Alejandro Mayorkas who has allowed, despite the brave efforts of VP Kamala Harris, five million people to just walk into this country illegally in a record amount of time. You can’t say we have a border crisis because Mayorkas has eliminated the border, so where’ the crisis. This terrifying clown figure has refused to let border patrol agents do their job and has failed to uphold the laws of the United States through his negligent, scratch that, through his deliberate actions.  Seems like an impeachable offense to me.

Secretary of Education Miguel Cardona has presided over the federal imposition of Critical Race Theory into our public school system. This is intended to drive a permanent wedge in between American citizens and keep us fighting with one another to the point that Democrats can use the ginned-up hatred as a way to motivate voters for decades to come. Setting policy designed to rip our nation apart can easily be taken to be an impeachable offense.

These are just a few listed to illustrate the point. We have plenty of others who deserve mention. Secretary of Defense Lloyd Austin, the face of affirmative action who is running our military as if it were a control group in a gender studies course at UC Berkley. Energy Secretary Jennifer Granholm who is deliberately dismantling America’s energy independence. Transportation Secretary Pete Buttigieg who, well, what can you say about good ole’ Pete? He begs the question of is he evil or just incompetent? Please don’t belabor that question. Both conditions are impeachable.

The power of the administrative state is beyond question. The problems is that it is so large that it feels as though there is no way to get your arms around it and attack it. Here we need to borrow from the playbook of Saul Alinsky and his Rules for Radicals.  Alinsky was certainly evil, but his “rules” can be put to good use when employed for the right reasons. One of those rules is to find a target, freeze it, personalize it, and polarize it. This is difficult to do with the administrative state because of its sheer size.  The answer then is to put a face to it by going after those thought to be untouchable, the Senate-confirmed Cabinet members who run it.

We have come to a point in American history where the scandals of Teapot Dome or Watergate, scandals that involved cabinet members that led to either resignation of imprisonment, appear to be almost petty when compared to what is happening within the fourth branch of government today. In the past we have had individuals in high office acting as criminals. Today we have institutionalized criminality. It is pervasive and it is running the country. Joe Biden may well be a criminal owing to his foreign dealings, but the administrative state is a criminal enterprise.

While it would be difficult to use the RICO laws against these people, the tool of impeachment is viable and awaits only the election of Republican majorities in November to be picked up and swung by its handle. It is time to send a message. It is time to touch the untouchables.