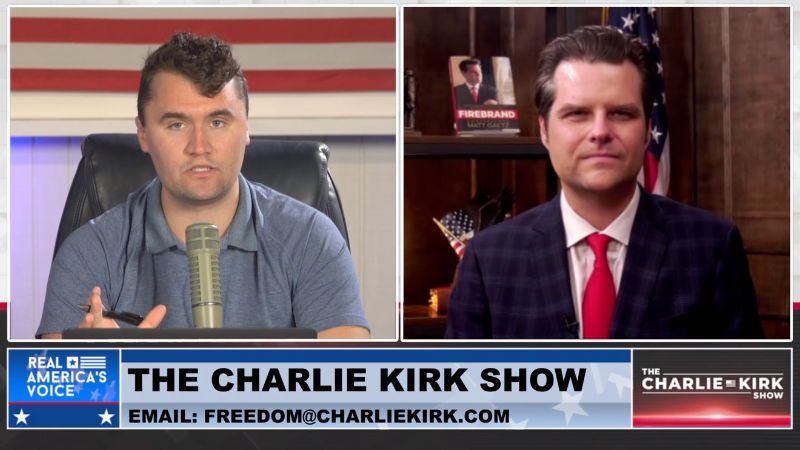 Charlie Kirk Matt Gaetz
On Friday's episode of "The Charlie Kirk Show," host and Human Events Senior Contributor Charlie Kirk brought on Florida Representative Matt Gaetz to speak about the calculus he made amidst a recent "smear campaign" from Democrats and establishment media that saw him not retreat from the public eye but "almost lean in."

"I learned it from President Trump," Gaetz said. "I learned that you don't let the process be the punishment. They tried everything they could to get President Trump off his game with abject lies that were told by the FBI, that were cycled through a series of authorized leaks to the mainstream media and then aggregated and repeated breathlessly."

"He [Trump] continued to focus on what the American people needed," Gaetz added. "And so I really took a lot of comfort in observing his approach to that."

Prior, Kirk had talked to Gaetz about his successful deflection of character assassination as Biden's Justice Department declined to charge the congressman last week after a much ballyhooed investigation.

"Now prosecutors are recommending no charges against Matt Gaetz after they smeared and slandered his character under some of the most, let's just say, breathtaking allegations of which obviously there is zero evidence whatsoever to support," the TPUSA founder said.

Biden's DOJ had leaked that it was investigating the Florida congressman for sex-trafficking, related vaguely to a trip he took with his girlfriend to the Bahamas. On September 23, career prosecutors recommended not charging Gaetz as the case had little-to-no evidence and no credible witnesses.

Kirk said the DOJ was "alleging all the awful things" as a tool to take a rising star in the GOP down.
Gaetz's rise in 2020 saw him pop up at hundred of events and cable news hits all where he would very articulately defend the MAGA agenda and build the base with a fresh face.

Kirk also said that he thought it should be illegal for the Department of Justice to generate rumors that destroy a person's reputation and "creates this mire of guilt" all in an effort to get him "off the playing field."

Gaetz noted that as the rumors exited the DOJ they were laundered into the news by outlets such as CNN and cited a Project Veritas recording where a CNN director admitted to doing propaganda on behalf of taking the congressman down.

"I think back to when a CNN director was caught by Project Veritas on a recording saying that they knew they were propagandizing my life,"he said. "They were purposefully running baseless allegations against me over and over because I'm effective. They admitted it."

Gaetz also said he was a threat to the GOP status quo.

"A lot of Republicans right now think that we can take the majority and return everything back to their version of normal. Unfortunately, that has managed American decline," he said.