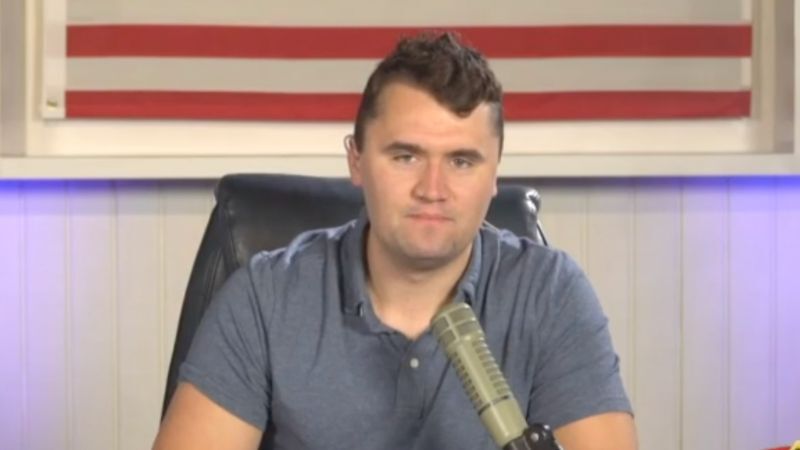 "Our Turning Point USA groups are under attack by left-wing domestic violent extremists far too often," Kirk said before detailing two back-to-back incidents at the University of New Mexico and the University of Iowa in September.

"At the University of New Mexico we had a nice campus event," Kirk said. "I'm telling you almost a dozen, or two dozen, domestic violent extremists on the Left started to assault police officers."

"We had to cancel the event," Kirk continued. "We had to vacate the speaker Tomi Lahren and put her into a safe room."

That incident, which happened on September 15, saw 100 left-wing domestic violent extremists storm the building Lahren was speaking in. She had to barricade in a back room for 45 minutes before being escorted out by police.

"Then another one happened at the University of Iowa," Kirk said. "Where the great Benny Johnson, who works with us at Turning Point USA was giving a presentation on memes and a guy comes up and physically and violently just throws the projector against the wall destroying the entire presentation."

The incident happened on Sept. 20 and the man who destroyed the projector was arrested.

"We have to be lectured about domestic violent extremism. Maybe they should see what's actually happening on American college campuses," Kirk said. Earlier in the conversation the TPUSA founder had mentioned the recently murdered 18-year-old Cayler Ellingson. Suspect Shannon Brandt was arrested (and subsequently released on bail) for the crime of slaughtering Ellison, and admitted that he went after the teen because he was concerned about the young man's Republican politics.

Kirk said that in response to the Left's attacks, "the philosophy at Turning Point USA is offense, offense, offense" and "October is a month of offense for freedom for America. No more important place to play offense than to go right into these liberal safe spaces to get our pro-American values where they're not usually heard."

Kirk said that, along with Candace Owens, their next stops are the University of Delaware, Michigan State University, North Dakota, Kansas City, Florida State, Grand Canyon University in Arizona and UT Austin.

The TPUSA founder ended by speaking about the mission he brings to these campuses and his goal to "capture their imagination that a better America is possible around meaning and truth and virtue.

He continued with "The opposition is very dark. They're very cynical. They're very hedonistic, they focus on licentiousness and immediate pleasure. We want to talk about how making the proper prudent political decisions or just philosophical decisions, we actually might be able to create a country that is based in eternal principles."