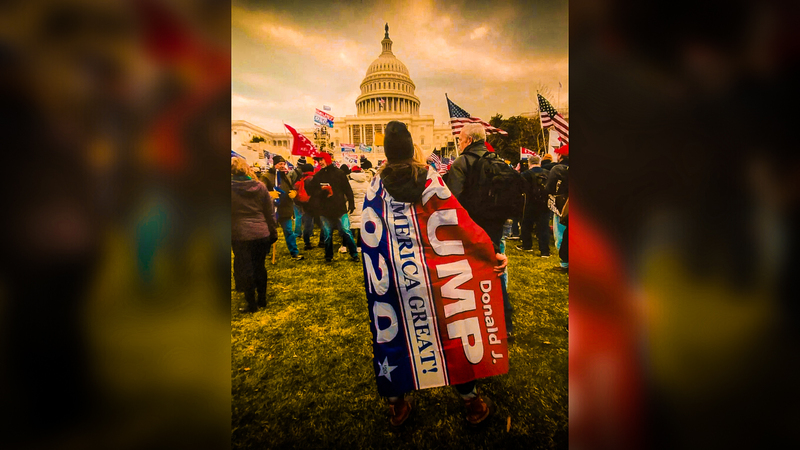 Ashli Babbitt
Unlike so many covering January 6th and its aftermath, I’ll be completely upfront about my biases. I handled press for the President’s speech at the Ellipse on January 6, 2021. I have watched as the government, the media and the criminal justice system have worked tirelessly to destroy so many associated with January 6th – whether they entered the Capitol or not.

It’s why January 6th is so personal to me and its why I so eagerly agreed to cover Ashli Babbitt’s mother’s press conference today.

The press conference was originally scheduled to be held outside the DC detention center in southeast DC where the J6 defendants continue to be held in deplorable conditions.

The purpose of the press conference was to – once again – call attention to the Constitutional and human rights abuses taking place at the DC Detention Center – where J6 prisoners are being held.

At the last minute the press conference was moved to the Triangle at the Capitol and then moved again to another spot on the grounds of the Capitol.

I wandered around the Capitol building looking for the press conference, the moment I saw a handful of American flags flying from a spot in front of the Capitol, I knew I had found the event.

Ashli Babbitt, the unarmed Trump supporter who was shot and killed by a Capitol Police Officer on January 6th, is a name you won’t hear from the members of the J6 Committee. It’s not a name you will read in the pages of the Washington Post or the New York Times. Nor is it a name you will hear bandied about on MSNBC or CNN.

Despite all of the hyperventilating by the left and the legacy media, none of them seem remotely interested in what happened to Ashli Babbitt that day, nor are any of them even vaguely concerned about justice for Ashli and for her family.

Micki Witthoeft, Ashli’s mom, is an accidental activist, when I asked her about being thrust into this role after the state murder of her daughter, Witthoeft replies, “I miss my little housewife life.”

Witthoeft is wearing a red t-shirt with the ubiquitous photo of Ashli, draped in the American flag in front of the Capitol, on it. As I talk to Witthoeft I can’t stop looking at the photo of Ashli on her shirt – and I’m sure that’s the purpose. To never let anyone forget her daughter’s life or her death at the hands of the US government.

And while Witthoeft may miss her “little housewife life” she is far from a shrinking violet. This housewife has turned political activist and speaks eloquently and passionately about the murder of her daughter – and she doesn’t mince her words:

It has been awful. The phone call you never want to get. Like I said my daughter was deployed four times and there were some days I was surprised not to get a call that something happened to her. But to know that she came to a Trump rally and was shot by her own government was just a completely shocking situation.

Burying a child is an unimaginable pain for a parent, something no parent expects to do, but for Witthoeft that pain was compounded by her daughter’s murder being associated with January 6th:

"I had three different places tell me no, no, no, this is too controversial. So even getting my child home and in a place of rest was difficult for me… they wouldn’t even let me bury my child… she was denied rendering of honors by the Air Force, despite being deployed four times and injured on her 21st birthday… she gave her youth, her ability to have a family and eventually her life for this country and they deny her the rendering of honors, so yeah I am pissed off."

When I ask Witthoeft about the lie told by the media that the only people who died on January 6th were five police officers, she is quick to correct the record:

"The truth is that four American patriots died that day – my daughter, Roseanne Boyland, Kevin Greeson and Benjamin Philips died at the hands of the Capitol police that day. And it is my belief that Officer Sicknick could possibly be still alive if they would have rendered him aid."

Witthoeft is certainly no fan of the J6 Committee, and with good reason – despite all of their histrionics about J6, no effort has been made by the committee to find out why Ashli was murdered that day. When I ask her mom how many times she has been contacted by the committee, she tells me, “none.”

The anger and disappointment Witthoeft feels is certainly not a partisan affair, when I ask her about why so many Congressional leaders – especially Republicans – have been silent on the issue of the treatment of J6 prisoners and I point out that no member of Congress was standing there with her today, she responded, “Amen, kinda says it all.”

I concluded my interview by asking her what she would say to the January 6th Committee if she was called to testify.  Her answer?  “I would tell them to kiss my ass.”