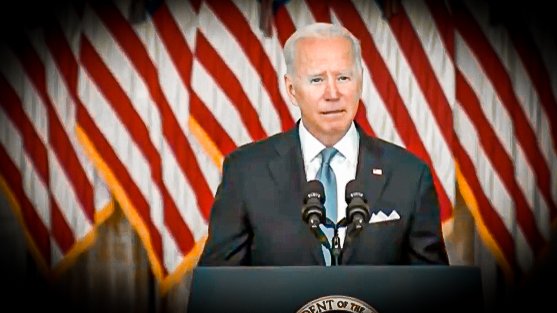 Last month, a video circulated on Twitter with President Joe Biden's face superimposed on a dancing Christopher Walken from the 2000 video for Fatboy Slim's song, "Weapon of Choice." As the Walken-Biden hybrid grotesquery dances, a series of the president's dubious and stochastic 'accomplishments' appear sporadically throughout, such as his appointing the first black woman to the Supreme Court.

The braggadocious spectacle also trended exactly a year after the president's absolute and unequivocal failure in pulling Americans out of Afghanistan, an episode with consequences so devastating it counts as one of the greatest presidential failures of all time. Even worse, President Biden and military leadership deliberately humiliated the Marines in the eleventh hour of the withdrawal and Biden himself humiliated many of their families to their faces.

On August 26, 2021, 13 marines were killed by an ISIS-K suicide bomber outside of the Hamid Karzai International Airport, and more than 60 others were injured. With the August 31 deadline approaching, the remaining marines would graffiti the walls at the airport with messages like "F*ck the Taliban." However, when Taliban officials, who had taken Kabul and would soon take over the airport, saw the graffiti, they ordered the US officials to have them cleaned.

As the New York Post reported, Marines, whose compatriots were just slaughtered in a suicide bombing, were forced not only to remove the graffiti, but clean the bathrooms, remove debris, and thoroughly clean the toilets at the behest of the Taliban, whose destabilization of the region enabled the bombing in the first place.

In speaking to the families of the dead 13 marines, Biden, as he often does, invoked his son Beau Biden, who did not die in combat but of cancer. As Business Insider reported, when one of the fathers of the dead rebuked the president for the inappropriate comparison, Biden "bristled."

Mark Schmitz, father of deceased, 20-year-old Lance Cpl. Jared Schmitz, said of the meeting, "It didn't go well. He talked a bit more about his own son than he did my son, and that didn't sit well with me."

According to Newsweek, over 300 dogs and cats were abandoned and relegated to death sentences by the Taliban. Americans also left 7 billion dollars’ worth of military equipment behind, including many night vision goggles which are one of America's pivotal tactical advantages during nightly combat. These losses are compounded with the cultural changes wrought by Taliban control, such as the complete degradation, subjugation, and frequent sexual humiliation and abuse of women and children.

Biden announced his withdrawal plans in April of last year, stating troops would start leaving on May 1. The US military abandoned Bagram Air Base in July, leaving behind expensive military equipment and important assets. As US troops left, the Taliban began capturing Afghanistan's provincial capitals as it closed in on the nation's capital. The US withdrawal happened at the peak of the Afghanistan fighting season, leaving the Taliban plenty of time to descend from remote regions of the country and overtake population centers and cities.

The Taliban entered Afghanistan's capital, Kabul, on August 15, causing Afghanistan President Ashraf Ghani to flee for Tajikistan. Lucas Tomlinson for Fox News reported that a US Official said, "that's it. It's over" as Ghani fled and the Taliban rapidly seized Kabul and took over the rest of the country.

Mere hours after Ghani's departure, the US Embassy instructed US citizens in the area to shelter in place and avoid both the embassy and airport as the evacuation descended into chaos. The statement read, "the security situation in Kabul is changing quickly and the situation at the airport is deteriorating rapidly. There are reports of the airport taking fire and we are instructing US citizens to shelter in place."

A few hours later, as a result of the rapidly deteriorating situation in Kabul, Chairman of the Joint Chiefs of Staff Mark Milley told Senators in a call that the timeline of how quickly terrorist groups would likely reconstitute in Afghanistan had accelerated.

In that call Milley, along with Secretary of Defense Lloyd Austin and several Biden officials also prepared the Senators on the call for the reality that tens of thousands of Americans and Afghan refugees would be left behind and that there was certainly "no real way to evacuate more than 20,000 Afghans looking to escape the country by August 31."

Meanwhile President Biden was vacationing at Camp David and White House Press Secretary Jen Psaki had taken some unannounced time off and neither responded on August 15 as Kabul fell into madness.

Both Mark Milley and Lloyd Austin had spent months of their time in leadership pontificating on "white rage," diversity of the military, and a litany of woke platitudes but seemingly had little military strategy for a successful withdrawal from Afghanistan.

Both Mark Milley and Lloyd Austin had spent months of their time in leadership pontificating on "white rage," diversity of the military, and a litany of woke platitudes but seemingly had little military strategy for a successful withdrawal from Afghanistan.

The US State Department announced that night that the evacuation of personnel from the US embassy in Kabul was complete, which was a lie. As Milley and Lloyd had just told the Senators, many foreign nationals including Americans and Afghani allies were unable to reach safety.