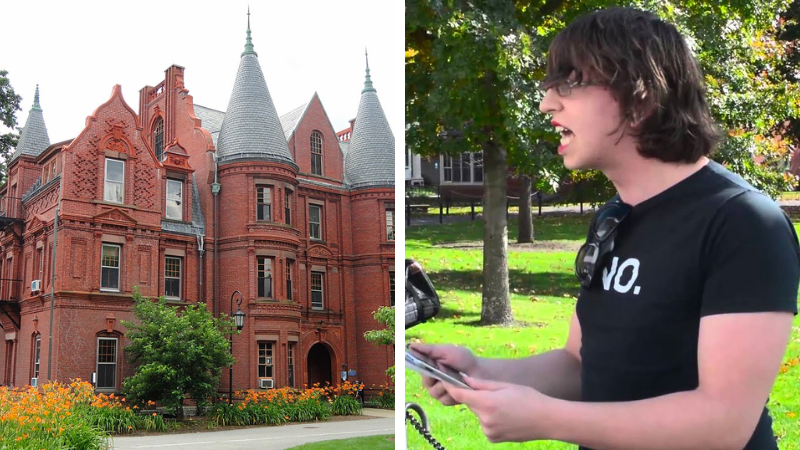 Wellesley College requires women to specify that they identify as women before accepting them for admittance at the historically women's college. While the old requirement was that prospective applicants simply be women, they now must have a "commitment" to the female gender identity. Being female is no longer enough.

An applicant to this formerly women's college now must "live as a woman and consistently identify as a woman." Since this language is confusing and bizarre, since being a woman derives from having a female body and that's enough for most women to understand that they are women, Wellesley saw fit to offer an explainer.

"Wellesley invites applications from all those who live as women and consistently identify as women," writes the school in their admissions FAQ, "and who are prepared for a rigorous academic environment that challenges them to achieve at their highest potential."

"'Consistently,'" they specify, "simply denotes a student's commitment to her gender identity. If an applicant's gender identity is not clearly reflected in her application materials, the College will request additional information that may include a letter from a parent, healthcare provider, teacher, or clergy, to give a few examples."

Women who don't want to make a big deal out of it, or who exist as female without it being a big aspect of their own personal identity, who simply are female, as denoted by their reproductive biology, must now attest to their femaleness in order to gain access to a women's college.

Application materials must dig into a woman's "gender identity," even if she is not particularly on board with the concept of gender identity. It is as though Wellesley College not merely interested in making sure that only women apply to the school, but that only women who uphold the notion that gender, and not sex, is what defines a woman.

Instead of requiring women to attest to their gender identity in the application materials, Wellesley could just as easily have said in their FAQ "no TERFS allowed." If you don't believe in gender identity ideology, Wellesley is likely not for you. The school does not want to admit women who are gender critical, who believe that men aren't women, or who do not find it necessary to expound on their deeply held beliefs about the integral nature of womanhood and its relationship to who they are.

At Wellesley, there is no place for women who simply exist as female. There is also no place for women who present in a masculine way and identify as transgender. "Trans men" are not eligible for admission. But men who identify as transgender are eligible for admission. As for non-binary individuals, "Wellesley accepts applications from those who were assigned female at birth and who feel they belong in our community of women." But, those applicants will likely have to explain their femaleness.

"Wellesley does not accept applications from men. Those assigned female at birth who identify as men are not eligible for admission," the FAQ reads.

Yet, in the following paragraph, they write that "Wellesley accepts applications from women. Those assigned male at birth who identify as women are eligible for admission."

For Wellesley College, a female body doesn't make the woman, the gender identity does. Women who don't subscribe to gender identity ideology will have a hard time fitting in at this women's college, while men who believe that gender is akin to the soul and believe themselves to be women despite not having a female body will be accepted with wide open arms.

Gender identity isn't about existing as who you are, it's about staking your sense of self on an ideology that reinforces gender stereotypes and holds that women who aren't feminine are probably not women after all.

"Gender identity," the Ontario Human Rights Commission specifies, "is each person's internal and individual experience of gender. It is a person's sense of being a woman, a man, both, neither, or anywhere along the gender spectrum. A person's gender identity may be the same as or different from their birth-assigned sex."

Many notable women graduated from Wellesley College, including two former US Secretaries of State, Madeline Albright and Hillary Clinton. Writer Nora Ephron, journalists Cokie Roberts and Diane Sawyer, astronaut Pamela Melroy, and many others attended Welleseley, without having to prove that they were committed to being women. It was enough for these women to be women without having to offer attestations to the fact.

The first biological male who identifies as transgender was admitted in 2015.