BREAKING: Charlie Kirk says Biden’s Speech is a ‘Declaration of War Against Half the Country’ 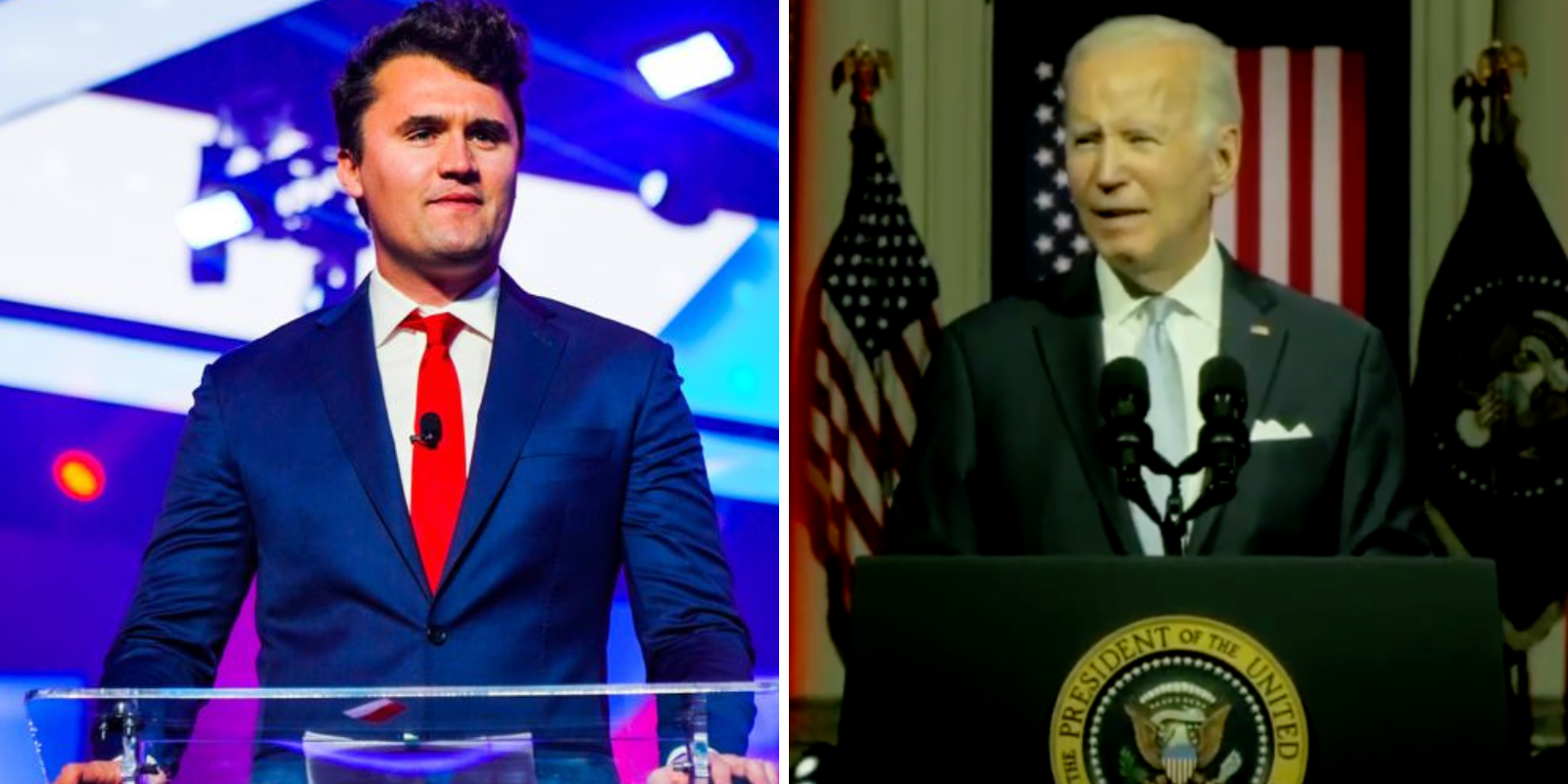 Charlie Kirk analyzed President Joe Biden's divisive speech attacking conservatives in front of Philadelphia's Independence Hall on Thursday night, saying that as a student of history, and despite the rule on The Charlie Kirk Show that not everything can be compared to Hitler, it was hard to make any other comparison than to the 20th century's worst genocidal dictator.

"The moment that Joe Biden walks on stage," Kirk said, "the entire imagery turns red, red lights going upwards, and two Marines come out and flank him. And these red lights are there all throughout the speech."

"The imagery looks like something out of the 1930s— and I don't say this lightly, and I can't stand when everyone compares everything to Nazi Germany. I think that is overdone. I think that it is just kind of a lazy and sloppy throwaway line. In fact, we have a rule here on the Charlie Kirk show, which is not to compare everything to Hitler— but, I'll be very honest it was very Hitlerian there is no other explanation," he said.

The blood red back drop was ominous, the ferocious attacks against his political opponents were shocking, and the vitriol Biden spewed at the the American people, and against those 74 million Americans who voted for Donald Trump, was nothing short of horrifying. Biden's speech, which the White House claimed was not political, was in fact nothing but political as the President used US Marines to flank him as he directed his anger and hate at those who don't think he's doing a good job as president and wish that the other guy had won.

Kirk said that there was "no mistake" for Biden having been flanked by two Marines, that it was "completely and totally designed" to show that Biden runs the military, and that they're "going to use the full force of the American government against you, 'we are going to crush our enemies.'"

This was a prime time address before a non partisan historical site that means so much to so many Americans regardless of their religion, political views, race, or ethnicity. It is an historical landmark that is a symbol of unity, just as the members of the Continental Congress unified the 13 colonies to separate from and revolt against British rule.

"I don't find joy in saying that," Kirk continued. "In fact, I spent an hour this morning workshopping the words. I said, 'Was it anything else than that? Is there any other way to explain what Joe Biden did here?' Why did I hesitate to say that on air because when your president declares war on half the country there's just no going back from that.'

"And I said this in the open, I'm gonna say it again: part of the speech was designed to provoke you into a reaction, it was a baiting speech. Do not fall for it. Stay peaceful. Stay happy, stay joyful. You can be angry, but do not let anger control you. What Joe Biden did last evening, as he went centerstage flanked by Marines, red lights up, was a call for a one party state," Kirk said.

While Biden took aim at what the new right, the new conservatives are doing, Kirk applauded it and listed off some notable achievements. While Biden and his Democrats are "trying to put the sights on you," Kirk said, "The grassroots, the workers who show up at school board meetings, the parents party, they know that's the energy of the Republican Party." He noted that Press Secretary Karine Jean-Pierre had said that MAGA was the energy of the Republican Party.

"You better believe it's the energy of the Republican Party," Kirk said. "We're changing school districts, city councils. We're registering voters, we're taking over precincts. This is why they have to call you semi-fascists. What you saw last night was an authoritarian, craven, weak, desperate old man who clumsily stumbled into an unprecedented speech for an American president, to use a prime time address funded by US taxpayers, again, funded by US taxpayers.

"This is not a DNC speech," Kirk went on. "This is not a rally. He was flanked by two Marines and what a desecration of the United States military for all of you that served our beautiful country, the military, he used the military to declare war on half the country at a sacred place as Independence Hall, the place where our freedom was articulated into words."

"What do they mean when they say democracy?" Kirk asked. "They don't mean representative government. They don't mean consent of the governed. They mean Democrats in control, obeying their commands."

"The MAGA movement is the most democratic movement happening in America. No funding, candidates coming out of everywhere, every direction, normal everyday people from welders to plumbers, electricians. If anything was democratic, it would be the MAGA movement. It's bottom up. It's not top down. It's not sponsored by Silicon Valley oligarchs or supported by trillion dollar companies," Kirk pointed out.

They're threatened by what could the consent of the governed and a representative project actually is. And they went to a completely different length yesterday. And this only goes to show: the crossing of the Rubicon that happened at Mar-a-Lago is only continuing, they have now tripled and quadrupled down on that."