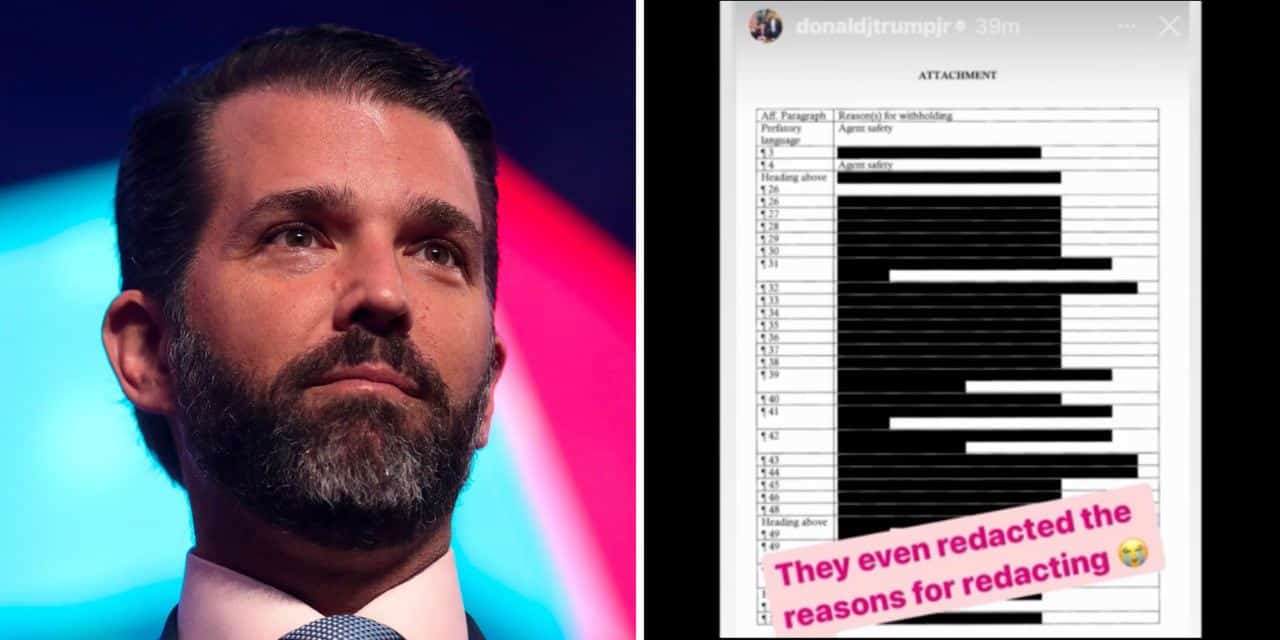 On Friday, the Department of Justice under failed Supreme Court nominee turned Attorney General Merrick Garland released a heavily redacted affidavit as back-up for the search warrant he authorized for the FBI raid on Mar-a-Lago. The redacted affidavit was so blacked out that even the reasons for the redactions were redacted.

Donald Trump Jr., along with with so many Americans who have been following the Biden administration's persecution of anyone tied to the former administration in their perpetual quest to indict President Trump on something, anything, to stop him from running again, took to Rumble to give his take on the affidavit, and the search.

"Well guys," he told viewers, "the release of the affidavit is out and we finally know literally nothing. It is so heavily redacted that you couldn't find anything in there."

He blasted the Biden administration for making claims that they want transparency while evidencing, through their actions, their unwillingness to be even remotely transparent. For Trump Jr., Biden says he wants transparency only to get credit for saying so from TV pundits.

He showed an image of the redacted affidavit, which was so blacked out as to be nearly impossible to analyze. "You think you get anything from this?" He asked.

"They release a heavily redacted overtly political affidavit. And it only proves that the Biden administration is so desperate to cover up their own unprecedented, unnecessary and unAmerican raid against my father. This is a travesty of justice. And if it happened to a Democrat, you'd actually be hearing about it. You'd see actual outrage in the media, they'd actually put an end to this crap," he posited.

"They didn't even check to see if documents and these things were privileged," he noted. "They wouldn't even allow his lawyers to be present during the raid, because they want transparency, right?"

He called the legitimacy of the FBI's investigation tactics into question as well, saying that it's not honorable behavior that leads the FBI to conduct a search of a former president's home in secrecy.

"They clearly they didn't want his lawyers, there I wonder why? Because they've acted so honorably," he said sarcastically, bringing up the case of an alleged kidnapping plot in Michigan. In a recent trial it became apparent that the men tried for a conspiracy plot to kidnap Governor Gretchen Whitmer would likely not have gotten involved in such a scheme were it not for FBI interference in the form of honey-pot agents, funding, and planning.

Trump Jr. stated that FBI agents "lied before Congress. Now those guys are CNN commentators talking about how dare we question the FBI."

"Really clears things up," he said incredulously about the redacted affidavit.

"They didn't even know if they had defense information in the documents that they raided, meaning privilege, like a basic concept of the American justice system. But of course, they wouldn't care about someone's rights when they're so committed to their travesty of justice— it's like banana republic stuff," he said.

As to what they will find in the boxes of seized documents, Trump Jr. said that the Biden administration is determined to find something, and that they'll have to simply to save face.

He compared the actions of the administration here to the Russia collusion hoax, where Trump was accused of having conspired with Russia to skew the 2016 election in his favor, only to have it revealed, years and years later, that it was in fact the opposing Clinton campaign that had essentially created the dossier that was used to implicate Trump, and that the information contained therein was false.

"This is Russia. Russia version 746," he said. "They almost have to like and, again, based on the way they function over the last few years, of course. Would anyone have any faith in these institutions? Would anyone think that they'd be above coming up with nonsense or planting it?"

"You couldn't be, you'd have to be foolish to think that these agencies now act even remotely honorably, especially when it's coming in from up as high as it is."

"They tell you with a straight face they want transparency, knowing the media will run with it, and then they do exactly the opposite," Trump Jr. said.

"It's McCarthyism," he said in conclusion. "That's all it is, folks, and it's happening in America right now."

"What would they say if someone did this to Obama? There would be outrage— but because it's Trump, and they hate his supporters. They couldn't care less."