Lessons From the Bitter End: What General Wrangel Means for Americans Today 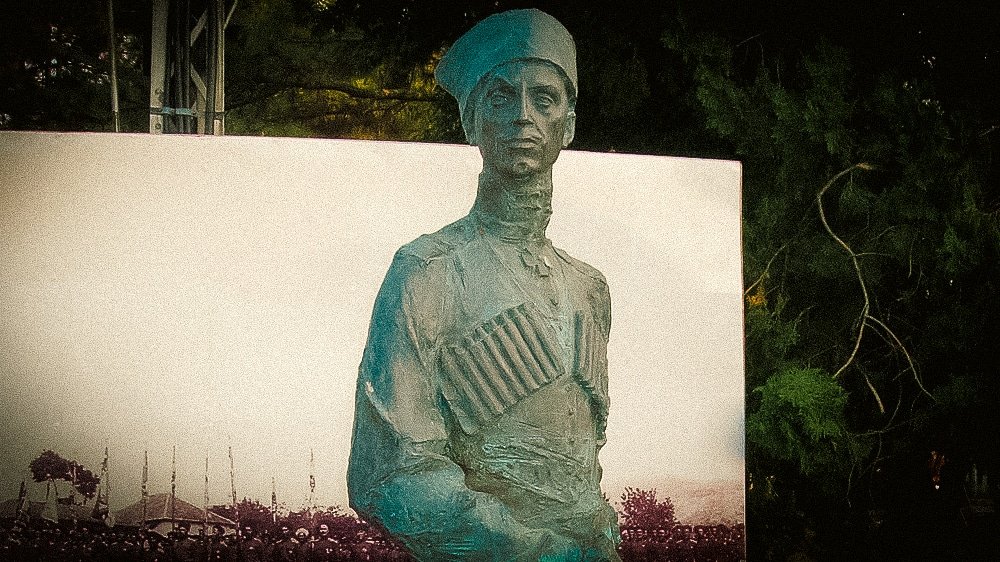 The Russian Civil War (1917-1921) is a conflict that’s mostly ignored by public schools. For obvious reasons, teachers’ unions and the education industry prefer to focus on the Russian Revolution (1917) only: the “workers” rose up, overthrew the conservative bad guy, and lived happily ever after until WW2. End of story, right?

The true history of the Russian Revolution and ensuing Civil War is a lot more complicated. Not many people know that the conflict involved nearly a dozen modern nations, hundreds of thousands of troops, and advanced tactics that wouldn’t be seen again until the 1940s. An astounding 12 million people died, and it’s barely covered at all.

Although there is growing awareness of the heroic efforts of Polish, Ukrainian, and Finnish forces in opposing the series of communist invasions that followed the Russian Revolution, the actual Russian effort to oppose communism by force was largely unsung until recently. The memoirs of the last leader of Russian anti-communist forces, General Pyotr Wrangel, were republished under the title Always with Honor in 2020 by an obscure publishing house, generating new interest in the man and his struggle to save his country.

The book gives a first-hand narrative of the Russian Revolution and the desperate fighting that followed. The history is interesting in its own right, but Wrangel also illustrates many lessons that Americans facing an out-of-control government and new wave of leftwing political violence should take to heart.

The Czar loved his people, and resigned because he thought it would calm a situation that had already gotten out of hand. Instead, showing weakness only emboldened radicals. A pushover liberal government replaced the Czar, allowing the Bolsheviks—communist terrorists previously excluded from government entirely—an unprecedented voice. The Bolsheviks eventually swept aside the liberals and hijacked the entire country during the October Revolution.

It’s important to understand from the get-go what radicals like the Bolsheviks want. Although the Czar voluntarily resigned to avoid conflict, the Bolsheviks arrested him and his entire family and imprisoned them in a remote villa. Then, one day, without trial or provocation, they brutally murdered the Czar, his wife, his children, their servants—even the family dogs. They did it because they wanted to and there was no one to stop them. They denied it, then they covered it up, then they celebrated it. Sound familiar?

Millions of people would be killed by communist forces or their indirect actions throughout the Russian Civil War. Millions more, through no fault of their own, had their property stolen by the communists and would be forced to live in poverty or flee their homelands altogether. The consequences of “losing” a major political upheaval are very real.

2. You Can’t Run from What’s Coming

General Wrangel was the best of Russia before the Civil War: He was a hero during World War I and the Russo-Japanese War and had even been awarded The Order of Saint Nicholas—Russian Empire’s highest medal for bravery, the equivalent of America’s Medal of Honor. He loved his country, but resigned from the military after realizing that the liberal government was trying to destroy it on the eve of the October Revolution. He moved with his wife and children to his home by sea, far away from the craziness of the capitol.

The Revolution came to him. Communist sailors (oftentimes just freed prisoners given guns and uniforms) sailed into port and began terrorizing everyone in his area. Elderly veterans, well-off people, anyone who was suspected of liking things how they had been before the Revolution was arrested for no reason. General Wrangel was one of many prominent citizens taken into custody by the sailors. He wasn’t told what he was accused of; he hadn’t been accused of anything specific. They simply arrived at his house one day and took him away.

Wrangel was handcuffed and taken by the sailors to their ship. They were killing the people they had arrested and dumping them into the harbor. They had been murdering people all day. Wrangel was saved by his wife and his servants, who followed him to loudly protest. Because Wrangel was so well-loved by his community, and the Bolsheviks had already killed so many upstanding citizens that day, the impromptu firing squad was too embarrassed to carry out the deed and let him go. Others who had no one to speak for them were not so lucky.

As much as many like to imagine that moving far away from the out-of-control cities will help, ultimately it’s not a long-term solution. The people behind radical movements are not going to let you just walk away from them. They need to be confronted head on or they will build their power and come for you eventually. Having narrowly escaped death, Wrangel set out to join the White Army, the term used to describe the loose collection of anticommunist forces that came into being after the Revolution.

3. You’re All in This Together—Whether You Like It or Not

One of the biggest tricks the Bolsheviks played during the Russian Civil War was, ironically, supporting nationalist movements. The many historical nations of the Russian Empire had long wanted independence and very understandably wanted to separate themselves from the Russian basket case after the Bolshevik takeover. When these nations said: “Let us secede,” the Bolsheviks replied: “OK.” At first, at least.

However, every single one of those nations experienced a communist takeover attempt in the following years. By the end of WW2, all of them except Finland were under direct or indirect control of the Soviet Union. This process left millions dead, billions in property stolen, and entire families sent into exile or just wiped out. The Bolsheviks wanted their enemies to be divided. Six small nations with conflicting interests are a lot easier to take on than a united front.

Reading through General Wrangel’s memoirs is painful. You can see good people fall apart instead of standing together against a clear threat. The liberal government was weak and hated by everyone, including conservatives. Although a lot of people talked about “doing something,” only the Bolsheviks took steps to organize.  General Wrangel describes the state of total confusion among Russian patriots at the time. No one was sure who they were talking to.

Conservative plots to deal with the crisis were formed and went nowhere. Two patriotic generals made a show of marching troops on the capitol to restore order, but one of the generals shot himself rather than follow through and the other was arrested. The Left used the state police and intelligence agencies, which they now controlled, to “investigate” Russian conservatives while radical leftists staged increasingly violent protests and takeovers. Military officers and dignitaries were targeted for harassment while terrorists and career criminals were allowed to act with impunity.

While this was happening, the anti-communists largely fought themselves. They bickered over relatively minor disputes, which were far outweighed by the threats facing them. When General Wrangel joined the White Army, it was led by General Denikin. Denikin was deeply flawed as a commander, but despite all his mistakes, Wrangel was unwaveringly loyal to him.

When rogue soldiers tried to place Wrangel (who had become famous for his bravery and integrity) at the head of the Army, Wrangel publicly refused and ordered them to obey Denikin. He understood that what strength they had depended on unity—they were outnumbered, their resources were limited. Worst of all, all the scheming and infighting created a climate of perpetual paranoia and backstabbing among the anticommunists. Because of this paranoia, Wrangel was eventually exiled by Denikin, only to be called back and placed at the head of the Army when Denikin resigned and fled the country.

Even after becoming head of anticommunist forces, General Wrangel was the target of numerous conspiracies from his own side. The war against the communists was going badly due to the huge disparity in numbers: the communists controlled the cities and could draft more soldiers. Frustrated, many anticommunist leaders went after the only targets they had access to: other anticommunists. The results were embarrassing and counterproductive. As much as these people didn’t like each other, they all would face the same fate at the hands of the Bolsheviks after the war: death or exile.

Wrangel took decisive steps to ensure that everyone under his command was on the same page. Very prominent leaders, military and civilian, caught undermining him were unceremoniously removed. There were no more games. Wrangel reinstated military courts and restored justice. Soldiers who committed serious crimes could no longer get away with them. Those caught abusing civilians were sometimes tried and executed on the same day. This approach to discipline actually made Wrangel more popular with his troops. People always want to be part of something with high standards.

4. Know What You’re Fighting For

One of Wrangel’s most important moves involved branding. Before Wrangel took over, the units that made up Denikin’s army were known by a variety of names including the “The Volunteer Army,” “The Don Army,” “The Caucasian Army,” and finally “The Armed Forces of South Russia.” Wrangel cut through crap and simply renamed his force “The Russian Army.” Wrangel was Russian, his men were Russian, the civilians he was trying to persuade to oppose the communists were Russian. And, despite how the Bolsheviks had hijacked his country, Wrangel still loved it. In a huge political split like that, the value of sticking to something people like and understand can’t be underestimated.

Likewise, while other generals took a lax approach to discipline, often looting the populace or behaving in outrageous ways, Wrangel focused on keeping the areas he controlled running as smoothly as possible. There was no tolerance for disorder on and behind the lines. Wrangel instituted land reforms that were so popular on both sides of the war that the Bolsheviks instituted the death penalty for their soldiers caught with pamphlets describing them. He was fighting for his country, not himself. Everything he did reflected that and people loved him for it.

This spirit lasted till the final days of the war. When the anticommunist’s position became impossible to defend, Wrangel ordered the full-scale evacuation of his army and any civilians who would face persecution under the Bolsheviks. While Denikin fled in a panic, leaving tens of thousands dead in a disorganized retreat, Wrangel had a plan in place beforehand. He personally led the orderly evacuation of nearly 150,000 soldiers and civilians, saving them from certain death. After Wrangel departed, the Bolsheviks executed roughly 100,000 civilians and prisoners who had been promised amnesty.

General Wrangel is a perfect role model for conservatives today. He was a man who stood up against the forces of terror and fought for his country against incredible odds. While a lot of people used the desperate times to toss aside their duties and composure, Wrangel rose to the occasion and acted with almost superhuman bravery and strength. “Always with Honor” really does describe him. When looking at the future, one hopes that conservatives will learn from the past, both by following the examples of heroes, and by avoiding the mistakes of those who failed miserably. As strange as the situation in America is today, it is not a new one. There’s a reason they don’t teach you about this in school.