JOBOB: Biden’s Ministry of Truth Is Alive and Well 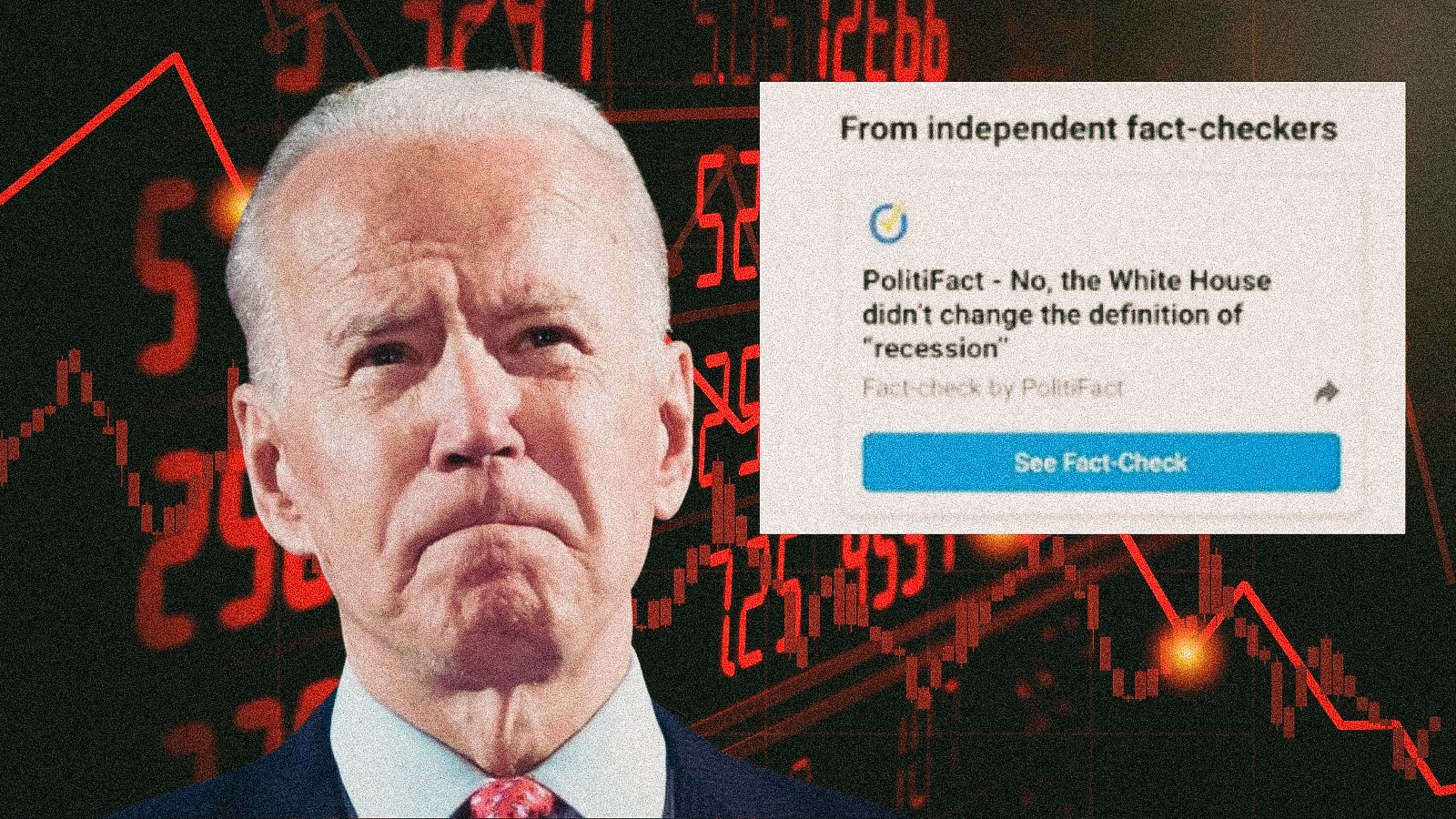 The Ministry of Truth is doing its best to control the narrative on behalf of the failing White House, and it’s chilling to watch the thought police regulate the exchange of ideas in real-time.

As reported by Post Millennial correspondent and TPUSA Ambassador Katie Daviscourt, Facebook ran interference for President Biden’s failing economic agenda by slapping a “fact-check” on one of the nation’s most accomplished US economists.

Not mincing words, Phil Magness, the senior faculty member and Director of Research and Education at the American Institute for Economic Research, tweeted bluntly that a recession is defined as two quarters of negative GDP growth.

This is unpermitted speech, according to the Ministry of Truth, and decided to flag his tweet with a disclaimer. Magness was not about to take that without raising his voice even louder, however, and delivered one of the greatest responses to online censorship I’ve seen recently.

“We live in an Orwellian hell-scape,” Magness retorted. “Facebook is now ‘fact-checking’ anyone who questions the White House’s word games.” I’m going to have to incorporate “hell-scape” into more of my everyday conversation because — if I’m being honest — it’s probably the best way to describe much of the state of our economy, national security, foreign policy, energy supply, stock market… you get the picture.

Also, Magness’ response is exactly the kind of reaction every American should have — conservative or liberal. Your ideas deserve debate, because good ideas deserve attention. Simply turning off your microphone or banning your tweets or social media accounts completely destroys the dignity that your ideas warrant in a serious society. You should not censor your ideas for fear of backlash, and certainly nobody should be entitled to do so on your behalf against your will.

The fact that Facebook is choosing to censor Magness’ observation is also a sign that this new leftist world order simply does not care about your pain. The economy is difficult for virtually every American right now — and you will be censored for even admitting as much.

“The economy is doing great!” they will force you to believe. Worse yet, social media giants will censor you if you dare admit that it just isn’t. You aren’t allowed to criticize how your life is being ruined, as they ruin it.

With this administration, globalist sensibilities matter more than your real-life pain. The smiles, the calm demeanor, the bumbling old man in the presidential suit… these are all features of a hard-lined agenda that has zero patience for your grumblings for food, electricity, air conditioning, safe neighborhoods, retirement accounts, or a dollar worth working for.

You are forcibly attending the drama of a globalist experiment. You are an audience watching your life ruined on stage by actors who bear you no kindred spirit. And, you are required to laugh as you watch it happen whenever your new leftist overlords raise the queue cards.

What’s the phrase I’m looking for that best describes this new reality… I would say, “Orwellian hell-scape.”

It’s time America Rises Up and fights back. Stop asking yourself, “What do I have to lose?” because, at this point, the government is listening in and anticipating your answer! Let whatever you consider worth defending and preserving be your motivation to speak up for your values — and you better speak up.

We should never have let the Left topple our statues — including our virtual statues. When the Left censored the sitting United States President on Twitter, that was the moment when conservatives should have risen up. But they censored him online, then began destroying the rest of our cultural icons.

That was the “warning shot” that went too far, but we all just let it happen. I honestly don’t think anyone thought we’d lose as much as we have — that we really would be dealing with an “Orwellian hell-scape.” Who would have believed it? This collective denial is obvious when you look at conservative outcry even now. Censorship is just so against who we are as Americans that we can’t wrap our heads around it.

But regardless, one by one, we lost our statues, our comedians, our teachers, and coaches.

Really, what we lost was the First Amendment. We lost the right to speak up. When the President was silenced, we all lost our freedom of speech by proxy. Who would dare agree with a President who himself can’t speak? The bans logically followed, and now… here we are. We live in a hell-scape of our own inaction.

If you ask me, all of this is what we have to lose. So be the next Phil Magness. And if you can’t be a world-class economist, then at least be a red-blooded American patriot. I can guarantee that that’s probably more important anyway.