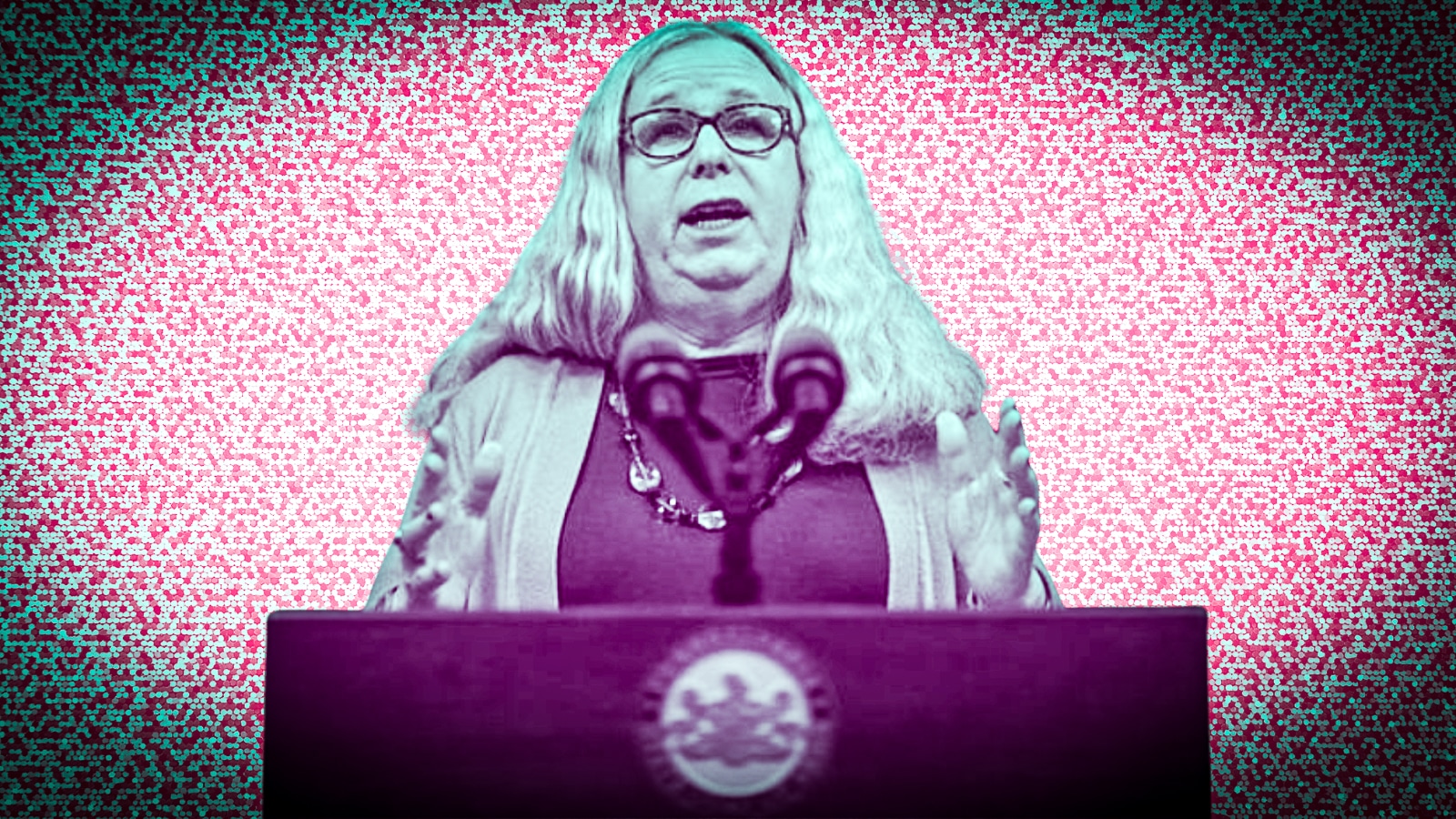 How does a dangerous man like Dr. Rachel Levine wind up in the White House, spewing potentially deadly information to the public about drugs to treat children distressed about their sexed bodies? He was backed by The Victory Institute, which works to get LGBTQ activists into top levels of power in the US.

According to the group’s website. “When LGBTQ presidential appointees are empowered, they can significantly influence the policies and direction of agencies and the executive branch to make positive change for LGBTQ people.”

Read: In this instance, push forward gender identity industry policies and laws that harm children and profit the medical-industrial complex by promoting dissociation from one’s sexed body as progressive.

Levine is exactly what The Victory Institute is looking for, and during his stint as Biden’s Assistant Secretary of Health and Human Services, he has worked to press the administration, and the nation, into accepting the idea that children can change their sex. This despite findings that show unequivocally the dangers both of the drugs used to halt puberty, and the life altering, reproductive ending, effects of surgeries. Levine transitioned later in life, after fathering children, a lengthy marriage, and a long medical career.

Levine, a man with a paraphilia that compulsively objectifies womanhood, reducing their sexed humanity to parts, told the US public on July 18 that kids needed to be empowered to change their sex. He touted this as “gender affirmation” treatment—a euphemism for invasive medical procedures on children’s sex, which are known to have harmful and long-lasting effects on their health.

The Food and Drug Administration, run by Levine’s Department of Health and Human Services, had only a few weeks earlier identified that puberty blockers carry a risk of brain damage to children. It’s not possible that Levine, a pediatrician, was unaware of this.  These known side effects in adults were reported at least as early as 1996, when women with endometriosis and men with late-stage prostate cancer prescribed the drug were reported to present with the same side effects. Dr. Laidlaw, an endocrinologist in Rocklin, California, has spoken about the dangers of these unapproved drugs for children for years.

Levine’s paraphilia, colloquially known as transsexualism, has been rebranded to transgenderism for today’s youth to open markets in medical manipulations of sex.  Normalizing this paraphilia, with the escalating prominence of the men who have it at all fronts of society, along with media promotion of it as progressive, edgy, cool, and part of a human rights movement, serves to drive further investments by elites in clinics to manipulate sex characteristics and assisted fertility treatments that will be needed later in life by children who are now being sterilized and otherwise harmed by these drugs. This industry is a direct outgrowth of the creation of synthetic sex characteristics that mimic women’s biology for men to assuage their fetish

Launched in 1993, the Victory Institute purportedly works to achieve and sustain global equality for people identifying as LGBTQ.  This is done through leadership development and training to increase the number of openly LGBTQ elected and appointed officials at all levels of government.  The Victory Institute has expanded its programming to include the Presidential Appointments Initiative—which works to place openly LGBTQ appointees in pro-equality presidential administrations. Levine is a man functioning within the confines of his sexual compulsion of autogynephilia. He is a product of these efforts by the Victory Institute to put men with this paraphilia in positions of power.

According to the LGBTQ Victory Institute, in November 2020, they and their partners “were working with the transition team to field and identify potential candidates for appointed positions in the Biden-Harris administration,” the group continued, further explaining that their goals included pressing the Biden administration to have an LGBTQ cabinet member, an LGBTQ Supreme Court justice, transgender ambassadors, and that “openly LGBTQ people receive equitable representation among presidential appointees.”

The “pressing” comes from the financial clout of the medical-industrial complex. Arcus Foundation is an American LGBT non-governmental organization (NGO) whose founder is heir to Stryker Medical, a $17.1 billion-dollar corporation with 54 branches in 37 countries. Jon Stryker funds his LGBT NGO directly from his stock in the Stryker medical corporation.

He is poised to profit from driving gender identity ideology and normalizing the myth that humans can change sex with medical technology and pharmaceuticals. Arcus Foundation has funded Victory Institute  $10 million dollars since 2004.

In February of 2020 during Levine’s Senate confirmation hearings, he refused to answer the targeted questions of Senator Rand Paul on the issue of whether children should be allowed to make medical decisions about their sexed bodies without parental consent. Levine used an evasive statement suggesting that “gender medicine” is too complicated a field to provide an immediate answer as to whether children should be receiving life-altering drugs and surgeries without parental consent.

Levine repeated this twice after being asked to clarify it the first time and completely failed to substantiate his position that children should be able to make these decisions. Now, a year and a half later, Levine is backing procedures that are known to cause permanent and long-standing harm to children and teens.

Quoted in The New Civil Rights Movement, Annise Parker, the former Houston mayor who now serves as President and CEO of the LGBTQ Victory Institute, in a statement said, “Rachel Levine’s nomination is groundbreaking and shows the Biden administration will choose the most qualified individuals to lead our nation regardless of sexual orientation or gender identity. Dr. Levine is making history and will transform Americans’ perceptions of ‘trans’ people when she takes office and begins to work on their behalf.”

The drive to normalize synthetic sex identities under a human rights frame is a flagrant deception by the techno-medical complex to open markets in surgeries, drugs, and assisted fertility procedures for a generation of children they are sterilizing with puberty blockers.

Men, like Rachel Levine, driven by this paraphilia to appropriate womanhood to assuage their compulsion, are given free rein in society to promote their paraphilia as healthy human expression. This has burgeoned into an industry where female reproductive capacity is being usurped by the techno-medical complex for profit.

The men with this compulsion are being placed by elites via organizations like the Victory Institute in positions of power and prominence to normalize this industry which creates synthetic facsimiles of human sex characteristics for marketing while transferring more and more women’s reproductive labor to the tech sector.