WATCH: Charlie Kirk Tells Benny Johnson TPUSA Is ‘Not Going To Put Up With’ Whoopi Coming After Its Students 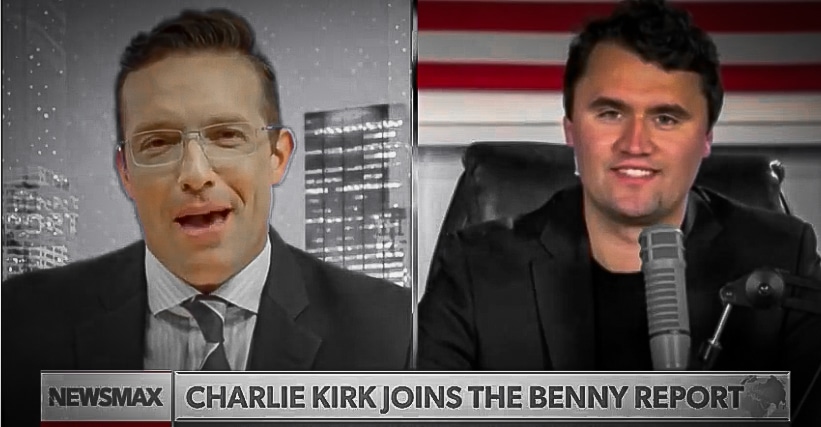 After Whoopi Goldberg smeared attendees of Turning Point USA's Student Action Summit as 'Nazis' on a recent episode of "The View," TPUSA founder and Human Events Senior Contributor Charlie Kirk told Newsmax's Benny Johnson that he wasn't going to "put up" with anyone coming after the group's students.

Kirk said that coming after his organization's students "is a line that we're not going to put up with around here," adding that he wouldn't tolerate "Turning Point USA chapter leaders being smeared."

Kirk highlighted TPUSA's high school program and how "you have these unbelievable young 14 and 15-year-olds, they come in full suits, they come to every speech, they're listening intently" but that he refused to let these young students get "looped in with Nazis" by media members as it could affect their futures and "job applications, college applications."

Protestors with Nazi flags and antisemitic signs showed up at the conference and attempted to disrupt the events but were quickly confronted by TPUSA's true attendees.

"We were very forceful in our condemnation as being the scum that they are with, obviously, the suspicion thinking that they're liberals," Kirk said.

The TPUSA founder clarified that, given the number of Leftist activists and Antifa protesting the conference, he believed they "were paid leftists to be there with Nazi flags," and noted that the flags seemed fresh out of the bag.

Kirk said if they were true neo-Nazis then they were "double scum" and lauded his group's swift and overwhelming condemnation of the hate group.

Despite multiple viral videos of the incidents, the hosts of "The View" smeared TPUSA, attempting to link the neo-Nazi group with the student conference. Whoopi Goldberg said the attendees were the same as the neo-Nazis outside as did Joy Behar who said it was the "same thing" inside and outside of the conference.

That led to a back-and-forth "brouhaha" as Kirk immediately sent a cease and desist letter to the show and said to Johnson "It (The View) started with kind of the typical back and forth: 'conservatives are terrible,' 'they're awful,' and then Whoopi kind of just comes in there and says, "and they let the Nazis in."

On Wednesday's show, following the threat of legal action, "The View" issued a formal, on-air apology to TPUSA for their comments. Although Goldberg added "all this, this extra layers on top."