America’s Future Channels a Distinguished Past to Reshape the Present 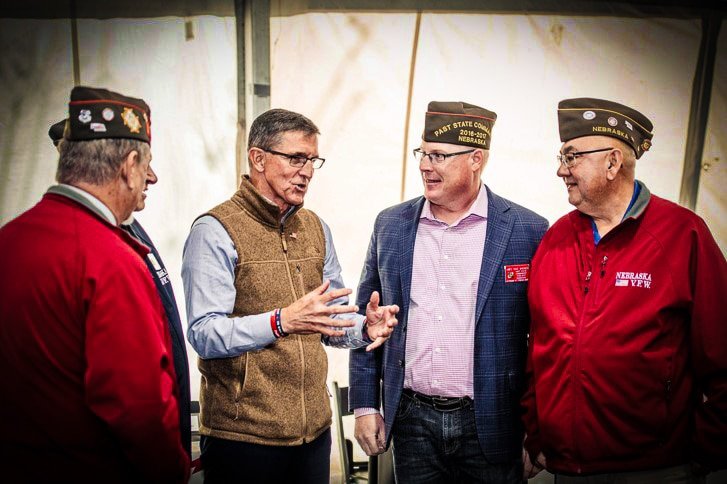 As America continues to lose what is left of the Greatest Generation at a saddening, steady pace, two grand old institutions, born from their sacrifice and valor, had a chance to sit down together this past week and talk not so much about the old times, but about what still lies ahead. I refer to a chance for Human Events (b. 1944) to sit down and talk with America’s Future (b. 1946) Executive Director, Mary O’Neill.

“People need to really wake up and understand that Americans have become quite lazy, and we are taking things for granted. We have to fight for our freedom. It's not it free. It comes at a cost.”  Those are the words of Mary (Flynn) O’Neill, the Executive Director of America’s Future, a 501 (c)3 that has been resuscitated after a 20-year period of dormancy by her and her brother, General Michael Flynn.

America’s Future was founded as a nonprofit educational foundation in April of 1946 by a group of New York City businessmen who were dedicated to, according to O’Neill, “preserving the two great fundamental principles of America; the private enterprise system and our constitutional form of government.”  The founding group had quite a list of prominent individuals, chief among being the media titan Frank Gannett, a noted rival of the somewhat notorious William Randolph Hearst. The late conservative activist who helped alter the course of the country with her 1964 Book, A Choice, Not an Echo, Phyllis Schlafly took a turn at the helm of the organization around 1990 and her very public profile helped to elevate the work of the 501 (c)3.

As was the case in the early days of Human Events, the original members, “were speaking out against communism. This was at the end of WWII and they were very concerned about the defense of America,” O’Neill said. “They were addressing the bigger, broader issues of the time, always with a focus on education. Eventually there was a radio show on Sundays on ABC Radio.”  After Schlafly, the organization was guided by the patriotic anti-communist fighter Major-General John Singlaub. Singlaub allowed the organization to become inactive for a couple of decades, but did raise its voice in defense of General Flynn during his persecution in the phony Trump-Russian collusion investigation. Singlaub passed away earlier this year at the age of 101.

“My brother, General Michael Flynn…I call him General…was asked to step in and oversee the revitalization of America’s Future. He did, and we started working on rebuilding in 2021. There is such a rich history here; so much to build upon.”

For her part, O’Neill has an extensive background in the not-for-profit world. She has been in the space for 35 years with her last “mission,” as she terms it, working for the Catholic Church in the Diocese of Providence. She served there as the finance director.

“When my brother came to me and asked me if I would be interested in taking on this nonprofit opportunity, I jumped at it.  I had been feeling kind of down about my work in the diocese. I really couldn't do kind of the work that I needed to do anymore because of some of the tough issues the Catholic Church has going on and that I was experiencing firsthand.”  O’Neill was elated at the opportunity to join her brother in this new initiative.

“This was really an opportunity for me to actually do some work with my family and that was important to me because everybody knows the persecution that my brother and his whole family went through. I really felt honored that he had asked me to revive America’s Future. I have background in finance and administration, so it was really a great thing for me to get to help revive this company.

O’Neill has brought in a small team of trusted, capable people around her, both as employees and outside contractors, and together they are starting to make a difference. “My brother, as Chairman, wanted us to get started right away issuing grants to some of the smaller not for profits and helping organizations like Moms for America. We also had to do things like create a quality website, build a solid email list, and all the things you must do to help grow a not-for-profit.”  O’Neill emphasized the writings and graphics that her team produces and says that has accounted for, “amazing growth in subscribership for our newsletters.”

A visit to the AF website shows their “guiding principles” are to:

Woven inside the descriptions of each of these guiding principles you find words and phrases like, “American exceptionalism,” “Judeo-Christian values,” and “strong emphasis on individual liberty.”  These are the kinds of phrases that have been re-resonating with more and more Americans since the backlash in 2016 against the collectivist and globalist policies brought on by eight years under the Obama administration. Some argue that Obama is back again, operating behind the scenes in the Biden White House.

Regardless of what the Obamas might be doing, America’s Future is certainly back again. When asked about what plans are in store for the balance of 2022 and beyond, O’Neill says that the real focus now is creating a series of materials that educate people on the Constitution. AF is producing a series of books to be used in the educational process, in particular for parents who home school their children. “We have been to events where General Flynn speaks and we have learned that people have a thirst for being educated on the Constitution and the Bill of Rights, but it has to be presented the right way.”

As for reaching adults, O’Neill says, “What we did was to take the actual founding documents and then we broke them into a sort of roadmap to get to freedom from tyranny. We started with the Declaration and moved through the Constitution and all the Amendments. We have also started using surveys on our website to engage our members. The response has been overwhelming. Our books, our newsletters, our surveys, all of it has been reaching people of all ages.”

O’Neill has even started a weekly podcast called “America Mondays with Mary,” where she discusses topics from the AF’s newsletter.

AF is also involved extensively in preparing amicus briefs for important Constitutional and individual rights cases that are consistent with their overall objectives. “We’ve got to get into the court system. We simply must. Violations of the 5th Amendment are everywhere, and we have to push back. We are going to continue to put money into amicus briefs. I believe we have six or seven of them already in 2022, but there'll be more to come because the requests for them pop up all the time.”

No greater example exists (save for the ongoing persecution of January 6th political prisoners) of abuses of the 5th Amendment and its Due Process clause than can be found n the “trumped up” charges lodged against AF’s chairman, General Michael Flynn. Flynn was transformed almost overnight from being a medium-profile career servant of the public with an expertise in intelligence gathering, to being made the poster child for Trump derangement syndrome within the Washington power establishment. His legal ordeal ended, at least temporarily, with a pardon from President Trump before leaving office, but that did not end his deeply felt obligation to serve his country. The General has been on a barnstorming tour of the country for months rallying local community groups and supporting “America first” type candidates. His values, and his experiences, have been woven into the most current iteration of AF’s long-woven tapestry.

“Michael’s experience has had a huge impact because it's really his platform. His message is to activate people locally and have their combined independent actions make a national impact. After he was pardoned, he decided to continue the fight for this country. America’s Future is a big part of that fight.”

Looking to the future, whatever activities in which AF engages,  O’Neill expresses her intention to make certain AF is above reproach in all of its projects and activities. She is also aware that because the name “Flynn” is attached to the organization, it will draw scrutiny from anti-American activists and journalists. “Today we have to be particularly aware of what is real and what is not because of the way media behaves.  It is important for people to be able to trust organizations, and that means running them properly and transparently. It also means running them for the right reasons. I find that a lot of nonprofits have really done a disservice to people by taking their money and not being accountable for what they do with it. That won’t happen here. Michael and I just feel so strongly about that.”

You can visit America’s Future at www.AmericasFuture.net