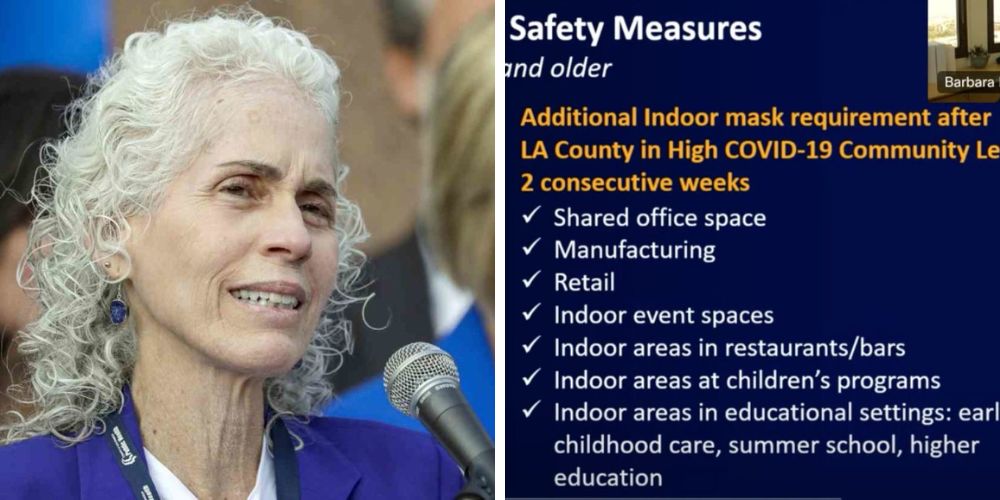 On Thursday, Los Angeles County reached the "high" level of COVID-19 infections, according to public health officials. As a result, a mask mandate could be imposed in two weeks, on July 29, and would apply to all indoor spaces. According to data from the Los Angeles Times, the death rate remains low in the county, with the number of intensive care unit patients around 115 as of Tuesday.

As the Omicron subvariants BA.4 and BA.5 spread across the country, LA County Public Health Director Barbara Ferrer told reporters during a briefing Thursday, "we have a ton of transmission right now." According to the CDC, the BA.5 subvariant accounts for a 65 percent majority of new COVID cases in the United States.

She endorsed reinstituting masks by adding, "The best way to manage the uncertainty and to reduce morbidity and mortality is to remain open to using both the sophisticated tools we now have our tests, our vaccines, our therapeutics and the nonpharmaceutical strategies, masking, ventilation, and distancing to layer on protections to respond to the conditions at hand."

Ferrer continued, "Sensible safety precautions that can slow down the spread of the virus are warranted, and that includes universal indoor masking." She told the County Board of Supervisors earlier in the week that an indoor mask mandate will be imposed unless there’s a significant reversal in the current hospitalization rates during the next two weeks.

As a result, the mandate would take effect by July 29, automatically going into effect if LA County’s rate of daily COVID-positive patients admitted to area hospitals is at or above 10 per 100,000 residents, which is the threshold for the CDC’s "high" category.

If the mandate does go into effect, it would then expire two weeks later. However, Ferrer warned that numbers would have to return to a "medium" rating. "I do recognize that when we return to universal indoor masking to reduce high spread, for many this will feel like a step backwards."

She added that masking "makes a lot of sense because it helps us to reduce risks."

Ferrer said the county would have to drop below the "high" infection level in order to "reverse course," but added that it’s unlikely that would occur before the mandate would be implemented.

Ferrer said the mandate would "include all indoor spaces, including shared office spaces, manufacturing facilities, retail stores and at indoor events. Indoor areas of restaurants and bars, children’s programs, and educational settings would also need to institute universal indoor masking as well. As a reminder, masks would not be required for those under 2 years old and those using outdoor spaces where the risk of transmission is significantly lower than indoors. Masks would also not be required indoors for those who are actively eating or drinking."

LA County was seeing a hospitalization rate earlier this week of approximately 8.8 residents per 100,000, which is categorized at a "medium" level. The health department said there were 6,530 new COVID cases, 15 new deaths, and 1,170 current hospitalizations as of July 13.

The possibility of a mask mandate comes after Philadelphia tried to reimpose their own mask mandate in April, then reversed it a week later after fierce opposition and even a legal effort to end the mandate.