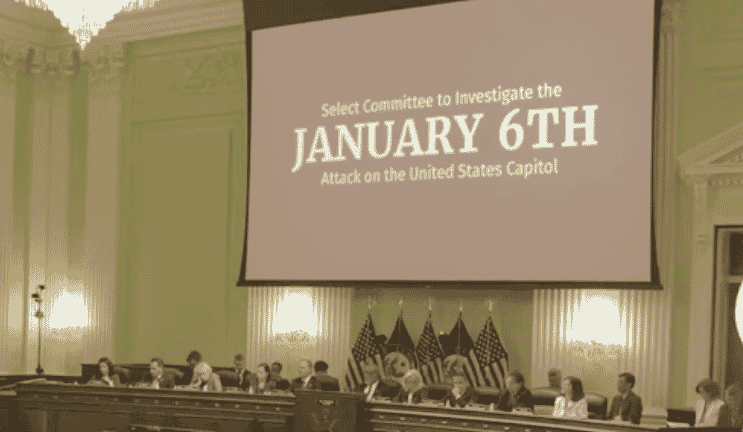 The other day I ran smack dab into an impromptu press conference just off of the floor of the U.S. House of Representatives. In the middle of the reporters was Rep. Adam Kinzinger (?-Ill.) of the House un-American January 6 Committee. I heard him say something like this, “I can’t tell you now, but it will be a big surprise.”

That statement to those people sums up the entirety of the January 6 gang of fabricators.

The members of the committee keep promising something spectacular. But, after 5 hearings, they’ve released nothing new, and relied on their co-fabricators in the media to hype their selectively edited “evidence.”

Each witness is lionized by a hyperventilating press corps that desires to demonize President Donald J. Trump. Where possible the media types join the House un-American J6 Committee (HUAJ6C) to try and wreck the lives and reputations of anyone associated with or supportive of Trump’s America First agenda.

Rep. Jamie Raskin (D-Md.) promised revelations that would “blow the roof off of the Capitol.” Of course, one must take this self-proclaimed “constitutional expert” with a grain of salt as he demonstrated the ability and willingness to tamper with video evidence when he masterminded the second impeachment trial of President Trump.

Liz Cheney (?-Wyo. ) lectured anyone who questioned the integrity of the HUAJ6C.

The pundits have projected their fondest desire for a series of dramatic revelations about the dastardly Republicans who questioned the integrity of the 2020 election.

Even under the direction of a prominent Hollywood news producer, the HUAJ6C production has been a dud. It simply doesn’t play.

Americans are more focused on the outrageously high cost of gas and groceries, and the failure of Biden to provide a rational plan to fix the problems he caused.

They’re trying to adjust their summer plans as a result of the Bidenflation issues. They are more worried about their inability to find all of the products that have been typically abundant when the White House has been occupied by a competent president.

Americans have already formed their opinion about January 6 and most struggle to understand why BLM and Antifa’s mass rioting and violent crime of 2020 don’t get the same attention.

The fact is, the Committee’s boring production has more fizzle than sizzle. But they’re not giving up the fight.

The Democrats on the committee are Uber-partisans and have taken a ham-handed, un-American approach to the whole thing.

The fact that the media refers to one witness as being like iconic actors from 80 years ago—Gary Cooper—is breathlessly fan-boyish while being antiquated and remote.

This is a committee that chose Rep. Adam Schiff (D-Calif.), who is despised by America for his supercilious antics of doctoring “evidence” and his doggish devotion to the debunked Russian Hoax, to lead questioning witnesses.

A Soviet-style show trial where the Commissariat, Rep. Nancy Pelosi (D-Calif.), promises to allow both parties to participate on the Committee—but booted off the members selected by the Republican Leader, Kevin McCarthy (R-Calif.), and replaced them with her handpicked henchmen, renowned Trump-haters, Rep. Liz Cheney (?-Wyo.) and Adam Kinzinger (?-Ill.).

In the run-up to the show trial, the HUAJ6C did most of its work behind closed doors, only providing a glimpse of their product through selected leaks meant to embarrass, damage, and promote prejudice.

Unveiling their findings apparently required that they hire a Hollywood-type producer to try and dress it up.

But, the stench from the Committee has wafted up from the United States Capitol and Americans are avoiding the dumpster fire.

An example of the hyperventilated “press coverage” that is riddled with anti-Trump, anti-Republican bias is the gushing reporting about the testimony of Arizona Speaker of the House, Rusty Bowers.

After Speaker Bowers testimony I was periodically ambushed, and somewhat bemused, by reporters who would typically ask me questions like:

“Any response about Rusty Bowers saying you pressured him to decertify the election?”

“How did you feel about allegations against you of voter fraud?”

You get the drift. I wondered if they saw the same testimony that I did.

I went back and got a transcript of Bowers’s testimony:

“Rep. Schiff: Did you also receive a call from US Representative Andy Biggs of Arizona on the morning of January 6th?

“Schiff: And what did Mr. Biggs ask you to do?

That’s the testimony. Mr. Bowers didn’t say I pressured, cajoled, harassed, or attempted to intimidate him. He didn’t say he felt pressure or intimidation.

Mr. Schiff did not ask whether I pressed or attempted to intimidate Bowers, nor did he inquire whether Bowers felt intimidated by a short telephone conversation.

Yet, the media, in an effort to find a bogeyman, simply made up stuff that they wanted to hear. Stuff that they hope will further their narrative.

Never mind that their narrative is untrue. Forget about the fact that my conversation with Speaker Bowers has nothing to do with the rioting that occurred during the hearing on the House Floor on January 6th. And, the riot is supposed to be the focus of the Committee.

Ignore the fact that the Arizona Senate had already had a hearing calling for a forensic audit of the Maricopa County presidential election.

Pay no mind to the professional relationship that Speaker Bowers and I have had for twenty years, spanning his first tenure in the state legislature, mine in the legislature and as Senate President, and his time as a lobbyist and then his return to the legislature. People who have known and worked together for decades tend to be able to discuss important matters with one another.

Disregard that I spent much of January 5th and 6th preparing for my five minute speech on the floor when I would join 140 of my Republican colleagues to ask for a delay in certification of Arizona electors—consistent with the United States Code and the practice of Democrats (including Reps. Benny Thompson and Jamie Raskin of the HUAJ6C).

Understand that I had in hand a list of approximately 40,000 voters who had registered after the constitutionally valid, statutorily established deadline. I had more than a thousand affidavits indicating voters who did not exist. I had a letter in hand from numerous Arizona legislators who requested that Arizona’s electors not be counted-at least until the completion of a forensic audit-which still has never been completed.

And, that brings us back to the notion of this un-American Committee. It was created because Democrats have a majority of members in the US House of Representatives.

It was formed to constitute a pseudo-third impeachment of President Trump. The committee has also violated the very rules the Democrats imposed upon themselves.

And, when Rep. Adam Kinzinger tells reporters there will be a surprise, but he can’t say what it is, he is telling the truth. The surprise is that there simply is no there, there. And, it will be up to the media henchmen of the HUAJ6C to fabricate a narrative that distracts Americans from the misery imposed upon them by Biden and the Democrats, no matter how distorted and without veracity.