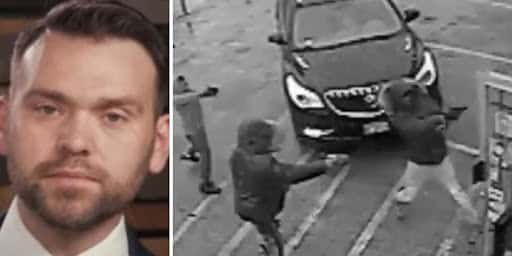 Posobiec began by calling California a "free for all state" when it comes to crime.

"It's a free for all inside California cities, where some of the richest people in the United States live. But apparently, because of the actions of DAs like Chess Boudin, actions by other DAs, Gascon in Los Angeles, to not enforce the law," he said.

Posobiec then began to tell viewers about crime tourism, where criminals are let out of jail and are able to leave the country with stolen goods.

"But they do realize they want to come back, because they want to keep doing this, and they're able to keep doing it, and here's how. Because even if they get arrested, they get let out of jail faster than the time it takes for the visa to expire. So that means they're able to get back on the street, drive to LAX, get back on an airplane, go back to the country from whence they came with their stolen loot," Posobiec explained.

Posobiec then urged viewers to "embrace the suck" of the reality of the situation in the US and acknowledge the state of law and order in America.

"You know, when Yuri Bezmenov, the KGB defector said that the way to destabilize a society is by releasing the criminals, I think he may have been on to something," said Posobiec referring to the former KGB agent and propaganda expert who defected to Canada in the 1970s.

Bezmenov lead a lecture titled "Stages of Subversion" which warned the free world of how democratic institutions were erroded to push Soviet agendas. Notes from the famous lecture detail his warnings of the following tactics: