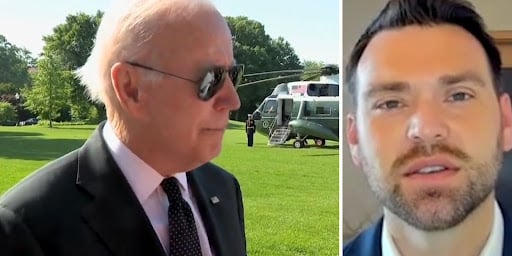 Human Events Daily host Jack Posobiec explained to viewers the situation in Syria following attacks on US-backed fighters by Russia at an American outpost. Posobiec explained why the US had fighters in Syria in the first place, and how America's "crazy neo-liberal globalist agenda" has only hurt itself.

"Russia attacks US-backed fighters in Syria at an American outpost," Posobiec began. "Just take the whole thing back for a second, it's just like Ukraine, just like in Syria, why do we have US fighters, and also US soldiers and US outposts in Syria.

"So, just like Ukraine, you have to go back a decade to understand what's going on. 2011 in the case of Syria, why do we have this?

"It was called Operation Timber Sycamore," he explained, adding that "It was ended by President Trump."

Posobiec explained that the operation "was a regime change operation authorized by Barrack Obama, vice president at the time Joe Biden, secretary of state at the time Hillary Rodham Clinton."

"They authorized the overthrow" of Bashar al-Assad the 19th president of Syria and commander of the Syrian armed force," he added.

"What were they going to do to achieve this? Sen. John McCain, Sen. Lindsay Graham, and Sen. Marco Rubio, a bunch of these people, went over there and said 'we found moderate rebels, and the moderate rebels are ones that we're going to train to fight Assad and get him out of power.'"

"So you started and you exacerbated a civil war within Syria a decade ago...And for some reason, just some interesting reason, this ISIS group is then created, because what are we doing? We're sending money in there, we're sending weapons in there, ISIS comes out of this. So then we say, 'Oh we've got to send US troops over there to fight ISIS,' but at the same time, those same US troops are still training these...'moderate, totally-not-jihadist rebels, totally-not-connected-to-ISIS-rebels in Syria, because we know because we're so smart and so good at foreign policy.'"

"So we've still got those troops on the ground right now, President Trump tried to pull them out, didn't work. They lied to him, essentially. Pentagon at one point said 'they're all gone,' and then they refused, and they told him no...General McMaster, the National Security Advisor told the President wasn't allowed to do this."

"By the way, H.R. McMaster has a piece out in Foreign Policy that says that all of this is happening around the world because America has been too restrained...We haven't stuck our noses in enough people's business, and that's why everything's falling apart," said Posobiec, referring to last week's opinion by the general titled "U.S. Restraint Has Created an Unstable and Dangerous Worl.d"

"No, General McMaster, it's the opposite," Posobiec rebutted. "All of this is happening because we stuck our noses in other people's business. Because we were mucking around and mucking up in parts of the world that we have no business being into, that we have no understanding of the thousands of years of history, of the conflicts that go back."

"These are blood conflicts that go back hundreds, and thousands of years. We have no purpose for being there, we have no strategic national interest for being there, and yet all that's done is in the name of this crazy neo-liberal globalist agenda to create more war."