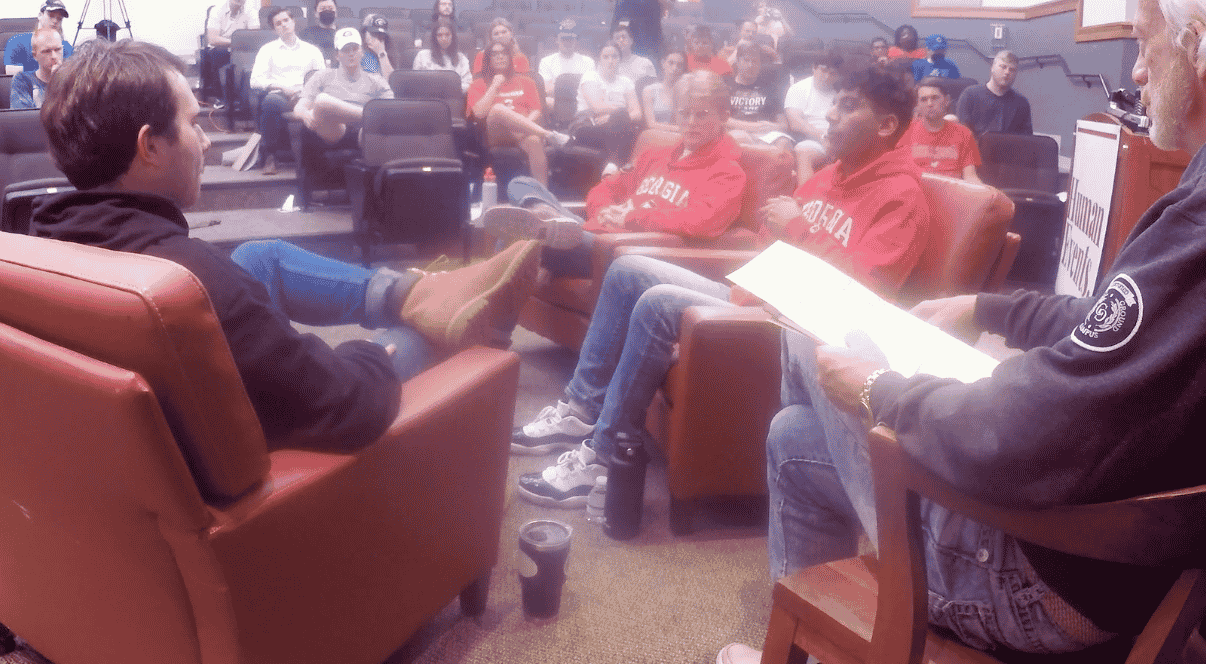 On April 14, Students at the University of Georgia were the first to have the unique opportunity to engage with their peers across the political aisle during a Common Ground Campus event. Students from both Turning Point USA and Democracy Matters participated in the first-of-its-kind event, sponsored by Human Events, Red White N’ Blue Tour, Turning Point USA, and Democracy Matters. Rubin Wealth Advisors was also a sponsor.

The non-partisan effort is a concept created by Felisa Blazek and Human Events Executive Editor Brent Hamachek. The initiative flips the typical campus debate format on its head, and instead discourages the argumentative approach often taken on college campuses, with an end goal of identifying points of agreement between both sides.

Now, students interested in nominating their own schools can do so at commongroundcampus.com, which also houses a video of the full UGA event. Common Ground Campus is already planning more of these groundbreaking events at college campuses across the country this fall.

“This program is the culmination of something that has been dancing in my head for years,” Hamachek said. “I’m thankful to Jeff Webb and Human Events for their financial sponsorship and support and I am also appreciative of TPUSA and Democracy Matters for being our first participating sponsors. Most of all, I am grateful for the vision, professionalism, and just sheer determination of my partner, Felisa Blazek for taking an abstract idea and turning it into something real and making it happen.”

“What happened in room 148 of the Miller Learning Center on the University of Georgia campus on April 14 was something that should be very frightening to anyone who wants to exercise control over every aspect of American life,” Hamachek wrote for Human Events after the inaugural event. “For 60 minutes, four college students with differing opinions sat and listened to each other. They asked questions and they learned.”

“Human Events is proud to be sponsoring common Ground Campus,” Webb said. “Today our country is evenly divided politically and extremists on both sides are unwilling to compromise on anything. We are stuck in a political morass. People are crying out for rational collaboration. A program like Common Ground Campus benefits everyone”

“I spent 40 years building an organization that served young people in this country,” Webb said. I always found that we made the most progress when people were given a chance to be heard and were working toward a common goal. Common Ground Campus can help create those common goals.”

Democracy Matters UGA chapter leader and student participant Parth Patel called the initiative a “good first step in bridging the divide in politics seen around the country,” saying it was “great to promote and participate in a discussion such as the one Common Ground hosted.”

Jack Mallon, TPUSA participant and campus coordinator, said that he felt his mind open up as a result of the event.

“From the beginning, I realized the importance of Common Ground Campus’s mission: talking about hard issues with the other side is something we need much more of, especially at universities,” Mallon said. “From the discussion we had on stage to the conversations resulting from the event, I feel like my mindset and understanding of racial issues on campus has certainly been expanded.”