On the Sidewalks of New York: Fighting Racism by “Kicking Cracker Ass”: Mayor Adams Cashed in on the politicized hate of white people 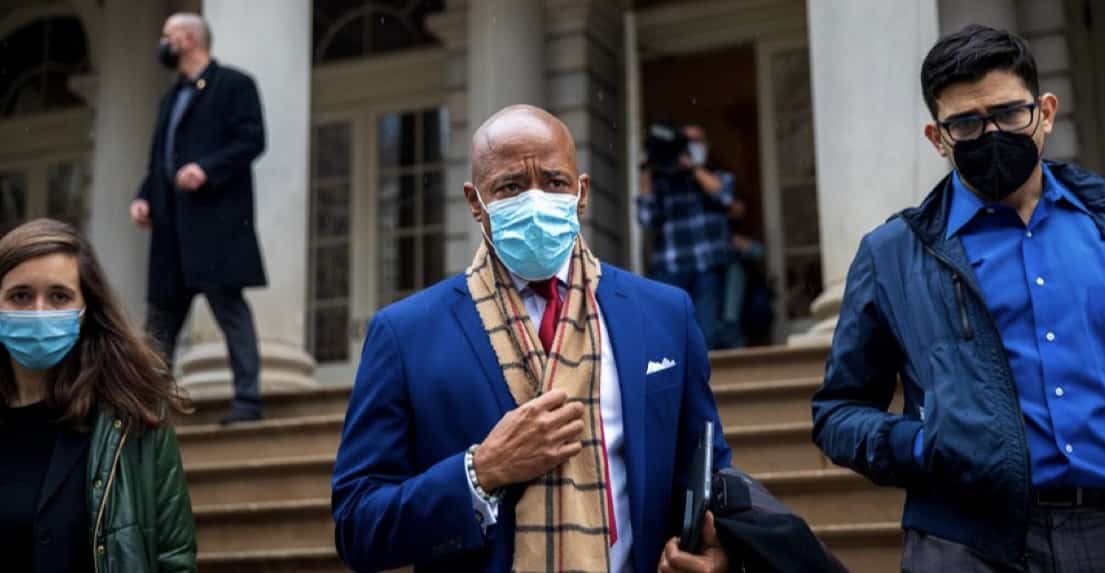 Since June 2020, when BLM became a household name and was given carte blanche in NYC, Gotham was reimagined. At the onset, DeBlasio appeared on television, not to condemn BLM terror but to pick up a paintbrush and paint the BLM logo on 5th Ave, assisted by career race baiter Al Sharpton. Under the auspices of BLM, CRT, “wokeism” and “systemic racism”, education, the legal system, financial institutions, corporate culture, entertainment, sports, government, and public programs, life as we know it has been forever changed for the worse. This isn’t debatable, it’s quantifiable. And it was done intentionally by DeBlasio, to destroy traditionally safe and thriving zip codes, “to make them less white and less rich” and became the launch pad for Adams.

Crime spiked under the DeBlasio administration but has careened out of control under the current; a 40% jump in the first month Adams has been in office.  This is only due to ignoring the Constitution, letting race determine legal outcome, and crafting policies based on pigmentation. Schools like 75 Morton Street in tony downtown Manhattan resemble an MMA match; violence so wild, it necessitated a visit from the DOE because staff follow a “restorative justice” initiative.  Luxury store Celine, in the luxury district of Soho, was ransacked by thieves in broad daylight to the tune of approximately $50k.  Despite the numbers, Adams gaslights, tells us it’s a “perception of fear” rather than a concrete reality. He lies, pins the problem on “white supremacy”, not only failing to unite but proving he’s a joke. One just needs to go on CompStat or nyc.gov to see statistically, why supremacy in NYC doesn’t exist.

What’s unforgivable is that after 2 years of being force fed a steady diet of how the most diverse city (over 600 languages are spoken in NYC), in the most diverse country, with the most diverse people in the world being called racist, is that the fringe minority governing us are racists and in power. We’re not the ones with the racism issue - THEY ARE.  And that to date, barely a word from the race obsessed politicians on what is an in-your-face racist rant from the mayor of the world’s capital, is a story in itself.

During this past NYC mayoral race, the press favorite and pre-anointed winner, Eric Adams adhered to a similar strategy to that of Biden when Biden campaigned; to not campaign. Behind the scenes, Adams was busy, futzing around being dined by power players and monied elite at exclusive members only clubs like Zero Bond, mugging for the camera. The whole thing was nauseating; Adams barely won his primary and the sycophant-like behavior was wholly disproportionate to his likability factor

Adams’ flagrant cavorting at ritzy locales was during covid, a time when NYC residents were told to stay home, avoid gatherings, and children were stuck in cramped city apartments supposedly doing  “remote school”, though then Mayor DeBlasio said he couldn’t be sure about attendance. Simultaneously, NYC residents were financially reeling on account of one party Democrat rule’s mismanagement of covid. All manners of life were shut down, burdensome regulations were placed on small businesses, restaurants were crippled with punitive, amorphous rules, threats of fines, and losing liquor licenses.

While covid mayhem was unleashed upon us in March 2020, NYC was caught flat footed by what next came down the pike; BLM.  Without a recovery period, amidst life being turned upside down, we became entangled in a war for which we were wholly unprepared.  BLM and the political powers in charge forced us to abandon all civilized society clung to; law and order went out the window, education became activism, maple syrup and rice became racist, paying for goods became white privilege, arson became a rite of passage, and victimhood became aspirational.

As NYC was reimagined - then candidate Adams’ platform came together.

Adams was elevated by major press outlets orgasming over his alleged veganism (though there’s now been talk he eats fish); we were led to believe he was the least lunatic of the lunatic radical liberals running for Mayor, touted as the law enforcement candidate and the “moderate.”

The “moderate” enjoyed moderate privilege. His record was rarely if ever detailed.

Even the most basic research yielded his support of BLM, Farrakhan, and Bill and Chirlane (McCray) DeBlasio. Adams was also an early proponent of allowing non-citizens to vote. Galactical red flags seemingly no media outlet was interested in covering. They wanted him and knew the numbers; NYC is a liberal bastion.  Despite this, there was low interest in the Mayoral race and just 20.5% of the 5.6 million registered voters across the five boroughs voted and Adams won with 754,000 votes.

Knowing the numbers and the state of NYC, some journalistic integrity might have yielded a different outcome.

The irony, of course, is that Adams, a black man with a troubled youth, rose through the ranks of gangs and poverty to enter the NYPD and ultimately become the 110th Mayor of NYC and the 2nd black Mayor of NYC - in supposedly “systemically racist” NYC.

Adams’ calling white people “crackers”, bragging about “kicking cracker ass” and “being unbelievable at it” is troubling for two main reasons; he continues to govern under the false narrative of “systemic racism” and highlights the blatant hypocrisy.  Roseanne Barr was deleted from life.  Whoopie Goldberg made an antisemitic statement, apologized with a non-apology and was suspended for 2 weeks.  What will happen to Adams - nothing, likely, because he went after white people.