Convoy Rally Is More Than a Loud Protest: It’s a Quiet Revolution 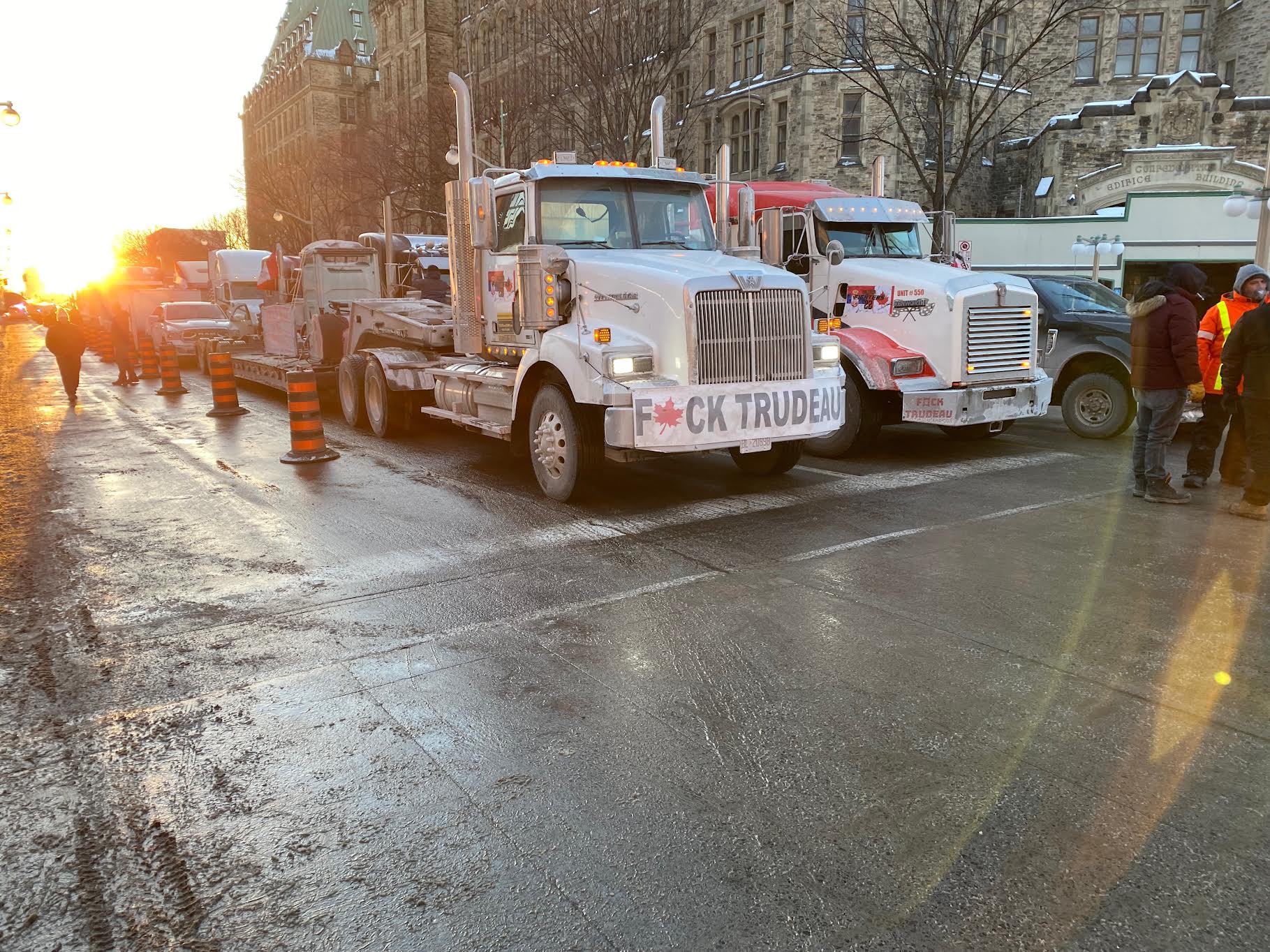 OTTAWA – I watched history unfold over the weekend.

You don’t think of Canada as a revolutionary country. It did not gain its independence through force of arms. The 1837 Rebellions in Upper and Lower Canada were less lethal than a gang rumble and more humorous.  When the Patriots declared their independence from the British Crown, the United Empire Loyalists headed north to declare their faithfulness to the King.

No, in Canada it has always been about the evolution of democracy, never quick and decisive action that leads to a change in power at the top. On Thursday Jan. 27, trucks began to arrive in Canada’s capitol of Ottawa. They continued to arrive on Friday and by Saturday Jan. 29, up to 100,000 trucks from across Canada and the U.S. had arrived to protest Canadian Prime Minister Justin Trudeau’s mandate that all truckers crossing the Canadian border had to be vaccinated and self-isolate. Given that truckers rarely leave their rigs – even to sleep – the order seemed extreme and unnecessary. It was a tipping point for truckers and it has become the turning point for Canadians who are tired of lockdowns, mandatory COVID-19 vaccines and endless masking that seemingly will never come to an end.

This is January in Ottawa and it’s cold. So cold that it feels like a wall of ice hits you when you leave the hotel lobby. That didn’t stop up to a million people from across Canada and the United States from coming here.

The Worldwide Rally for Freedom has gained worldwide attention. Elon Musk voiced his support for the protest. Former President Donald Trump said, “We want those great Canadian truckers to know we are with them all the way.” Fox News’ Greg Gutfeld says America needs to do the same thing.

Of course Human Events’ own Jack Posobiec, who has developed a deep interest in the convoy surpassing all other matters for the moment,  tweeted Sunday:

What Canada and the world witnessed – and continues to witness because the rally has continued into Sunday and beyond – is the Modern Magna Carta as ordinary people – Hillary Clinton’s deplorables – demand their rights back after politicians on both sides of the border have decided to use the dwindling pandemic as a continuing excuse to wield executive and legislative power over the lives of everyone.

If the truckers didn’t start this convoy for a larger purpose, by the time they arrived in Ottawa after being greeted along the highways by larger and larger crowds of supporters, it became clear that this was about more than just their livelihood, they had become the embodiment of freedom in a very real way.

Trudeau disappeared before the convoy arrived. He talked about isolating because he believed he might have been exposed to the COVID-19 virus. He’s already had COVID so that raised some eyebrows at the convenience of the disease striking. Before leaving town to parts unknown, the prime minister had his own deplorable moment, suggesting that these blue collar ruffians who deliver our food and goods are a really reprehensible lot: “The small fringe minority of people who are on their way to Ottawa, who are holding unacceptable views that they are expressing, do not represent the views of Canadians,” Trudeau said.

“[Canadians] who have been there for each other, who know that following the science and stepping up to protect each other is the best way to continue to ensure our freedoms, our rights, our values as a country.”

Just how does Trudeau believe that keeping people in masks is ensuring any freedoms or rights? It is bolstering Trudeau’s values which would appear to be keeping the masses in line.

The always pro-Liberal Toronto Star even admonished the truckers to call off their protest days before they arrived in Ottawa – as if – because they were “flirting with extremists.” Really? How would the Toronto Star know that unless they planned to invent the extremists themselves?

Leaked government documents discovered by The Counter Signal reporter Keean Bexte reveal that the Trudeau government was really trying to cash in on this event by distorting a legitimate peaceful protest into the sort of “insurrection” that the Democrats have so successfully done – even creating a useless committee to assess a fanciful event. The convoy organizers were way ahead of the Prime Minister’s Office. They used an app called “Zello” that can only be described as verbal texting or a cyber citizens’ band radio. Truckers were reminded that their behavior while in the capitol had to be beyond criticism and that at no point were they to enter any government buildings – even as tourists. Look what happened to those Trump supporters. As a result, there was no claim of an insurrection.

Obviously everyone participating in the protest wasn’t a trucker. Matt Kennedy is facing expulsion from the Waterloo (ON) Regional Police Force for refusing to take the COVID-19 vaccine, which he says is a “personal choice what goes into my body and early on I had doubts about the need for this vaccine in young and healthy people … I just didn’t see the value in getting it.”

Kennedy said he drove to the rally “to show my support for this movement, to stand with like-minded people who believe that no Canadian should be forced to put something in their body or do something to themselves to keep their job …  I wanted to come and support this cause.”

Trucker William Ravensburgen comes from the Niagara Peninsula and he was quite clear about why he was at the rally: “We want freedom.”

“It never was never the anti-vax issue just for truckers … it’s about freedom, it’s about masking, it’s about social distancing, it’s about restrictions in churches and schools, it’s about getting the young kids back into schools – all of that, that’s what this is about.”

Ravensburgen said the mainstream media are “trying to smear this as being an anti-vax protest which is not what it is at all, we want Canada back and we’re doing this for the world actually too: this has gone well beyond Canada’s borders.”

Ravensburgen mused about the recent federal election where the various parties met for a debate that turned about to be policy agreement.

“There’s not been an opposition, there’s not been a voice representing us for over two years … and we need to get our country back … everybody needs to live their life as they feel they ought to: we’ve been given these rights by God.”

“Canadians have been very laid back and let our values be trampled over … We’re going to die if the nuclear family dies.”

He laughed at Trudeau calling the protesters “the fringe” as he pointed to the hundreds of thousands of people on the street as the trucks continued to honk their horns.

Another trucker who would only give his first name of James said the rally symbolized “peaceful, hardworking, people – normally quiet – but when provoked, they will blow their horns. It’s a rally for women and children who have frozen their butts off on every single bridge … tears streaming down their faces … people want their freedom; people want their country. We’ve had two years: you want five years of this? It’s going to turn into communism.”

It didn’t take the mainstream media long to find an angle favorable to the Trudeau government and by Sunday Jan. 30 there were of reports Nazi and Confederate flags being proudly waved at the event and a well-known statue of Terry Fox being “desecrated” because someone had apparently put a flag around the monument. It all started with a tweet with a suspicious photograph of a Nazi flag. The problem is that the photograph shows the group alongside what appears to be a river, or at least water. There was no protest along the Ottawa River. Nobody moved beyond Wellington Street. So the whole thing appears to be a setup. I spent nearly 16 hours broadcasting live, getting pictures and interviews and saw absolutely no Nazi or Confederate flags. If I had I am certain the individuals carrying these items would have been removed from the scene.

But by Sunday morning, the mainstream media was reporting the mythical Nazi flags as fact.

Ottawa Mayor Jim Watson, who used to serve in the provincial legislature as a Liberal Member of the Provincial Parliament, is demanding that the truckers leave. He said with no sense of irony Sunday:  "You have the right to protest, you've had your protest, please move on. Our city has to get back in normal stead."

“Normal?” People in Ottawa or anywhere in Canada haven’t lived in normalcy in almost two years. They’ve been jabbed twice, told they have to have a third, maybe a fourth and have no idea when they can stop breathing in their own CO2 with these damned face masks.

The truckers are having none of it and are telling Watson to pound sand. Or with temperatures still at 0 degrees Fahrenheit, he can pound salt.

The Ottawa Police Service would not even provide an estimate of the number of trucks or people who participated in the protest, saying the situation continued to be “fluid.” This despite telling the rally organizers on Saturday that there were 500,000 trucks on scene.

This estimate quickly evaporated when media began calling. When pressed if they could hazard a guess for those involved on Saturday, at the height of the rally, a spokesman said he could not. On Sunday night, Const. Amy Gagnon still refused to give an estimate of the numbers involved though she alleged having “seen multiple cases of disruptive, inappropriate and threatening behavior from demonstrators.”

On Sunday night, police seemed ready to clear the protesters from the downtown core, lining up in riot gear but they mysteriously dispersed and the ralliers become revelers again, dancing in the streets in the frigid night.