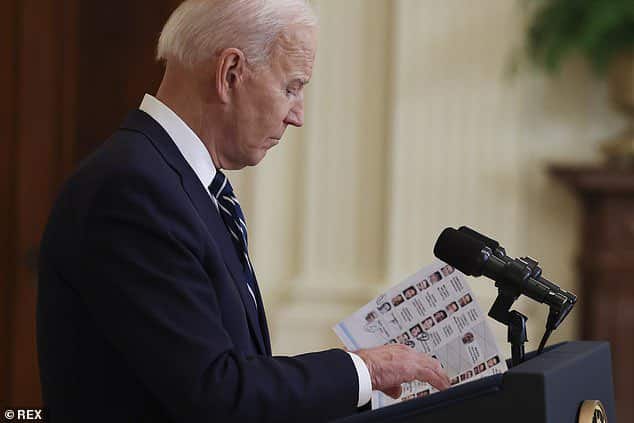 One photo shows Biden holding a card labeled “infrastructure,” with a list of key statistics and talking points, just in case he lost his train of thought.

“The United States now ranks 13th globally in infrastructure quality - down from 5th place in 2002,” one bullet reads. “China spends 3 times more on infrastructure than U.S.,” the list continues.

Another photo, perhaps the most hilarious, shows a cheat sheet with the names and photos of journalists he planned to call on. Some of the reporters had a circled number next to their image.

A mere 25 reporters were allowed to attend the conference. Indeed, Biden took a limited number of questions from a pre-selected list of reporters before abruptly leaving the room. Of note, Fox News’ Peter Doocy was not one of them.

Human Events contributor Charlie Kirk asked the question, “if Joe Biden can’t stand up to Peter Doocy are we really supposed to expect him to be able to stand up to Xi or Putin?”

It is not uncommon for presidents to come prepared to press conferences with note cards and talking points. However, a yearbook-style sheet of names and faces might stray from the norm.