Vikings, Impeachment, and the Butterfly Effect. 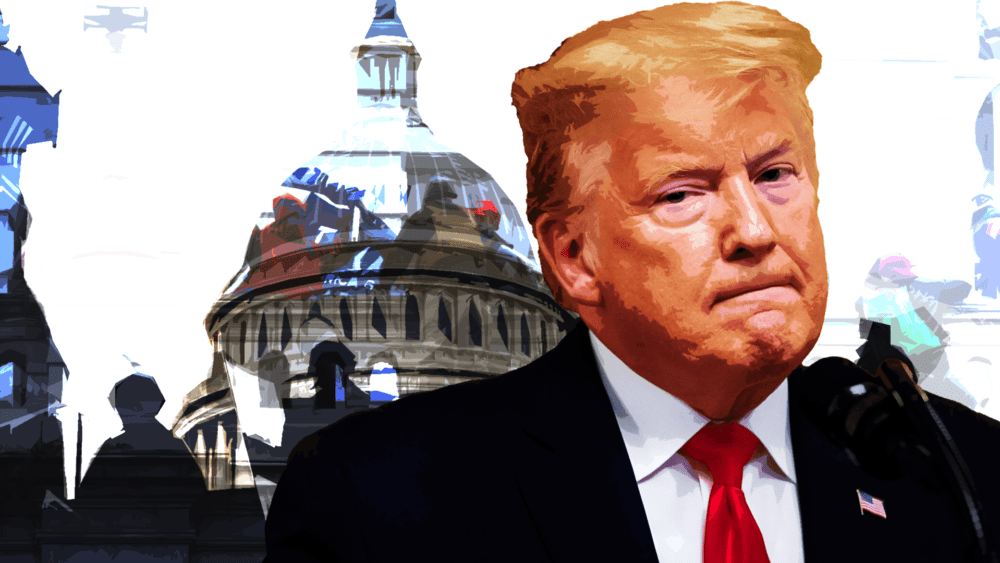 As the latest impeachment proceedings draw to an end, one could certainly use the word ‘unprecedented.’ A second impeachment for a person no longer in office would fit the definition. Dripping with irony, an extra-constitutional ‘tribunal’ has argued that former-President Trump attempted to subvert the Constitution by inciting violence.

American history has several prior examples of the seat of government under duress from domestic disturbances...

Unprecedented is also the word most bandied about when describing the Capitol Building riots of January 6th. In this case, it is an inaccurate description and just another reason to worry about the historical ignorance of the party currently in power. American history has several prior examples of the seat of government under duress from domestic disturbances—although none of them involving someone dressed up like Leif Erikson.

July of 1932 saw somewhere between 15,000-20,000 military veterans (known as the Bonus Army) descend on D.C. in an effort to protest and pressure Congress on pending legislation. Destitute from the effects of the Great Depression, these WWI veterans were looking for early payment on a promised bonus. When their pleadings failed, small elements of the group escalated tensions with D.C. police. Fatalities ensued.

This violence led to the infamous scene featuring Douglas MacArthur and George Patton marching the army and rolling tanks to forcefully confront the veterans—right between the White House and the Capitol Building. The veterans were mostly weaponless, with a sporadic few throwing items like rocks. Before it was over, some of the protestors were dead.

An earlier incident, in 1793, involved serious concern with a mass of protestors angry at George Washington’s foreign policy. They seethed at his Proclamation of Neutrality instead of providing full military support for France’s latest war with the British. It was the opinion of then Vice-President John Adams that only the breakout of a yellow-fever epidemic had spared

Clearly, the ‘unprecedented’ narrative is pushed either from a place of willful ignorance or intentional disinformation.

Washington from being physically abducted from the executive residence. Once the danger of the contagion was understood, much of the capital evacuated which dissipated the mob. A decade before that, in June of 1783, there was in fact another incident during which several hundred armed and disgruntled continental soldiers marched directly on Congress, forcing the representatives to flee the area and stake out a new location.

Even state capitol buildings have been barreled into and illegally occupied. A notable example was the occupation of the Wisconsin Capitol Rotunda, in 2011. Clearly, the ‘unprecedented’ narrative is pushed either from a place of willful ignorance or intentional disinformation. It seems that members of both political parties hope to detach the events of January 6th from any context of history, and, alongside it, avoid any self-reflection as to the societal climate they themselves helped create.

Americans who found refuge in the last four-years of Trump’s policies would benefit from a reflection of how Donald Trump’s actions substantially diverged from his words. During his presidency, Trump was the undisputed head of the Republican Party largely due to the political fortitude he exhibited. Yet, in 2020, he was the president of law and order more in spirit than in actuality. It is Trump’s timidity in exerting his constitutional powers—not his alleged incitement to violence—that is most to blame for our existing predicament.

There is no need for those on the right to engage in damage control regarding who was involved. Was there instigation by anti-Trump types? Evidence supports this claim. Even so, that doesn’t change the fact that many Trump supporters did illegally enter, vandalize, menace, disregard police, and that a police officer may have lost his life as a result of the melee. That is not a reflection on Trump or his law-abiding supporters anymore then it would be fair to automatically blame Obama for groups like Hamas having voiced support for him, or if we were to blame Jodie Foster for the attempted assassination of Reagan.

[A]ny objective analysis of his hour-plus of talking belies the notion of it being a riot-inspiring message.

The essential question is if Trump’s speech had reasonably incited the violence. Certainly, his speech was filled with contempt for his opponents, as well as the Republicans he felt were disloyal. He spent most of this time reiterating his usual claims of election fraud. However, any objective analysis of his hour-plus of talking belies the notion of it being a riot-inspiring message.

Even those looking for individual statements to misconstrue have had a difficult time. At best they brought up statements such as, “we’re just not going to let that happen,” “we’re not going to take it,” “we will not take it anymore,” “fight,” and “fight like hell.”. Taking issue with lines like that can only happen by isolating and divorcing them from everything else in the speech, and by turning a blind eye to the myriads of times similar phrases have been used in peaceful politics. (Take Senator Elizabeth Warren’s ‘Women’s March’ speech from 2017 where she used the word “fight” 19 times including, “Now we can whimper, we can whine, or we can fight back. Me, I’m here to fight back!”)

Maybe we can accuse Trump of some plagiarism issues with the rock band Twisted Sister, but speeches like his with demands to “peacefully and patriotically make your voices heard,” don’t typically go down as barnburners to incite violence. In fact, immediately after his speech, it was downplayed as “nonsense” by real-time self-appointed media fact-checkers and called “rambling” and “boring” by reporters. “Incendiary” only started appearing in mass after the violence had begun.

The most glaring issue with the ‘Trump encouraged the riot’ narrative was this line from the speech: “If this happened to the Democrats, there’d be hell all over the country going on. But just remember this. You’re stronger, you’re smarter.” It is quite the mental leap to say that Trump was inciting rioting while saying his supporters were smarter for not rioting.

Additionally, alleging incitement is only possible if we ignore blatant hypocrisy. Preceding and during the violence, murder, and mayhem that took place during the George Floyd protests, Democrats repeatedly urged people to “take to the streets” in protest. One lawless act after another was brazenly committed in conjunction with such protests.

Upping the ante, U.S. Rep. Ayanna Pressley (D-MA) with the backdrop of ongoing BLM riots, specifically demanded there should be “unrest in the streets.” On national television, then-Senator Kamala Harris enthusiastically said, “everyone beware” in reference to the civil unrest. Although we cannot divine her intent here, it is impossible to see anything categorically worse from what Trump said as compared to our newly installed Vice-President.

Still, although his actions with regard to January 6th rightly merit acquittal, Trump is far from blameless.

During the riotous summer of 2020, I found myself angry with Trump over his lack of action. Unchecked lawlessness was destroying America. Trump had failed a test of leadership by not using all possible federal resources to put an end to the months of violence and the ‘autonomous zones’ that had effectively seceded from the country. As Matt Walsh puts it: “After hundreds of left-wing riots, Republicans frowned disapprovingly and Trump tweeted about law and order.”

Trump constantly acquiescing to the obstruction of Democrats ... signaled that his “law and order” message was theoretical.

Trump had engaged in the same type of “I’m not allowed to” reasoning that several presidents before Abraham Lincoln had employed as well. Presidents such as James Buchanan rendered themselves subservient to the southern states by using an attempted constitutional excuse of state-supremacy to do nothing. Alexander Hamilton had advised the opposite in Federalist No. 70: “Energy in the executive is a leading character in the definition of good government… it is not less essential to the steady administration of the laws… against the enterprises and assaults of ambition, of ambition, and of anarchy.”

By Trump constantly acquiescing to the obstruction of Democrats in places like Seattle, Grand Rapids, Philadelphia, Milwaukee, and Atlanta, he signaled that his “law and order” message was theoretical. Quick thinking governors and inter-state party leadership acted decisively to protect changes in voting laws.

Not surprisingly, epicenters of election night ‘surprises’ were in Michigan, Pennsylvania, Wisconsin, and Georgia. Fueled by redirected millions from BLM donations, protected by partisan judges, and with the media-driven panic of coronavirus as the impetuous, they jammed enormous changes to the voting and verification process. The fact that the changes were legally iffy and made fraud nearly impossible to prove made little difference once done.

These politicians had thumbed their nose at then-President Trump with impunity for so long that they realized, in this area, he was all bark. The situation called for the response of an implacable Lincoln, a Teddy Roosevelt crashing down on machine party-politics, or a JFK turning the tables on a defiant governor. Instead, Democratic state leaders were dealing with the non-interventionist Trump.

What Trump accomplished in his term was impressive, especially with the incessant attacks, lies, and mischaracterizations he was subjected to.

By the time they were trying to fix things post-election, it was too late.

The responsibility of the anarchy from January 6th resides on those that committed the crimes. Trump’s speech bears no blame for what occurred. However, the actions Trump failed to take mid-2020, allowed this virulent strain of anarchy to take hold in American society.

Anarchy from the summer protests-turned-riots. Anarchy from political powers changing voting rules extra-constitutionally. Anarchy of state and local governments turning ‘temporary’ emergency powers into temporary grants of individual freedoms. Anarchy of tech giants determining that the 1st Amendment needs them as its arbiter.

What Trump accomplished in his term was impressive, especially with the incessant attacks, lies, and mischaracterizations he was subjected to. So my disappointment in his not insisting on the law and order he only verbally demanded, is not meant to diminish all he did. I do not think anyone could have collectively done better, nor am I blind to the enormous difficulties in stopping wanton lawlessness in a non-MacArthur sort of way. I simply bring up this criticism more from a place of saying, “what if?” What if the Red Sox hadn’t sold Babe Ruth to the Yankees? What if Kobe and Shaq would have stayed together? What if Trump had stood up to the governors who refused to protect their own citizens? What accomplishments might the next four years have brought? What disasters that we now face, would have been averted?

Unfortunately, we will never know. Instead, we find ourselves on the defensive, as we now face an era that truly is unprecedented.