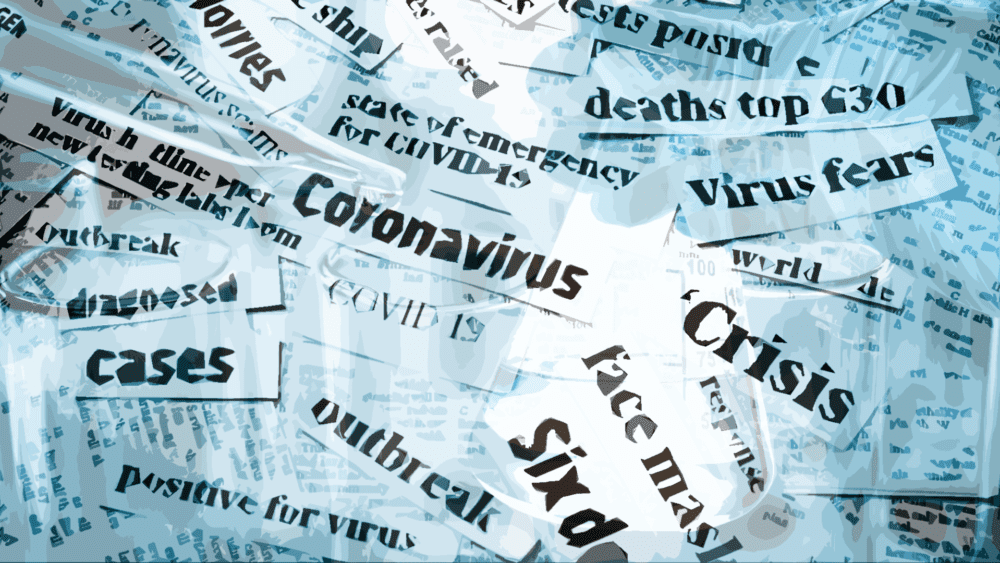 Furthermore, the escalating war on misinformation and disinformation seems to be less concerned with actually trying to establish authoritative sources of truth as it is with marginalizing facts or narratives that don’t suit the establishment agenda. The labels “misinformation” and “disinformation” are liberally and inconsistently applied to silence dissent and promote certain political interests.

The war on misinformation and disinformation is more about controlling the political narrative than it is about establishing a consensus on basic facts; narratives that threaten the establishment are banned, and the tyrannical expansion of government power ensues.

False or misleading information is the inevitable product of a lack of trust in authoritative, sense-making institutions. For decades, trust in public institutions, such as government, media, and academia, has been declining. 69% of Americans believe their government intentionally lies to them, while 61% believe the news media deliberately ignores certain stories or information. Much of this decline can be attributed to the failures of the institutions themselves: institutional deficiencies that are perfectly captured in the response to, and media coverage of, the COVID-19 crisis. A combination of incompetence, hypocrisy, and duplicity in the handling of the virus has shattered the public’s faith in media, local government, and federal agencies. As it pertains to information about the coronavirus, only 36% of Americans claim to trust the CDC, while 26% trust their state and local government, and only 18% trust the media.

When all this was the consequence of listening to the “experts,” no wonder misinformation and disinformation have become so prevalent.

The public’s distrust is well-merited. Dr. Anthony Fauci, one of the leaders of the Coronavirus Task Force, has admitted that he intentionally lied to the public regarding the vaccination rate needed to halt the virus. State Governors, such as Gavin Newsom and Andrew Cuomo, have repeatedly flaunted their own lockdown orders, with the former doing so to eat a $900 dinner. And these are only the most egregious examples.

While lies and hypocrisy don’t exactly endear one to the public, the corresponding mismanagement of the virus aggravated public distrust. Anthony Fauci’s lockdown plan of “two weeks to flatten the curve” has turned into a year of lockdowns; nonsensical vaccine prioritization policies have led to wasted doses; a lack of substantial economic relief has ruined millions of lives. When all this was the consequence of listening to the “experts,” no wonder misinformation and disinformation have become so prevalent.

Yet rather than take responsibility for poorly-informed policy decisions, the common refrain from public institutions has been to blame everyday Americans. Failure to follow social distancing regulations, stay-at-home orders, and mask mandates have been held up by media and elected officials alike as the chief cause of the pandemic’s persistence, and “anti-maskers” have been demonized as convenient scapegoats for colossal bureaucratic failures.

Los Angeles County, one of the most COVID-19-affected areas in the country, exemplifies this trend. Rather than address their failings, lawmakers and public officials have abdicated responsibility for the crisis and placed the blame on the average citizen. Following a vote to increase fines for non-mask wearers, Los Angeles City Councilman Paul Koretz argued that “widespread non-compliance is driving this unimaginable spread." Los Angeles County Health Officer Muntu Davis, meanwhile, has even gone as far as calling those not wearing masks “domestic terrorists.” (Nevermind the fact that mask compliance has been “great," in the words of Los Angeles Mayor Eric Garcetti; it’s simply easier to blame the people.)

Rather than confront the fact that a year of lockdowns and mask mandates isn’t working, our local governments, the ostensible representatives of the people, have opted to bury their heads in the sand. And, by blaming the public, our institutions have succeeded in eroding social trust and nurturing a culture of suspicion. People no longer see their local governments as remotely capable, and therefore no longer see them as worthy of trust. And if people can’t trust their government to do its job, they’re not going to trust it as a source for information.

Trust in authoritative sources of information has also been damaged by the inconsistent and politically-motivated application of the “misinformation” and “disinformation” labels. That classification is rarely based on any actual criteria for determining truth. Instead, it's an identifier of whether or not information deviates from the party line.

[T]heories or facts that don’t fit the official narrative, despite being true, are treated as misinformation or disinformation.

Facts or theories historically treated as misinformation have often become the official position of our public officials and institutions. For example, theories such as the notion that Vitamin D is effective in lowering the risk of COVID-19 transmission, or that masks are effective in preventing COVID-19 infection, were once both considered misinformation. Yet the CDC now recommends mask usage, and Anthony Fauci (though not the CDC in an official capacity), now recommends Vitamin D supplements.

Similarly, the theory that COVID-19 numbers were inflated by false positives due to inaccurate testing, once considered a dangerous conspiracy theory, is now the official position of the World Health Organization. And while questioning the efficacy, and even the morality, of lockdowns was once demonized as callous and selfish, previously pro-lockdown governors are now advocating for reopening the economy despite cases being at an all-time high.

In these examples, theories or facts that don’t fit the official narrative, despite being true, are treated as misinformation or disinformation. More troubling, however, is when these labels are applied to information that would harm particular political interests.

For example, reports of Hunter Biden’s dealings with Ukraine and China that were leaked mere weeks before the 2020 Presidential Election were characterized by our infallible national security experts as “Russian disinformation," before eventually being accepted as fact six weeks later—conveniently after the election had concluded. Similarly, the idea that former Obama-era CIA Director John Brennan was spying on the Trump campaign was mocked by “official” sources as disinformation, despite being confirmed by Brennan’s own notes.

While it’s certainly an issue that experts and public officials are often wrong or simply lying to protect their agenda when they label reality as misinformation or disinformation, the more pressing problem is that these politically-motivated labels, particularly disinformation, are being used to justify censorship and repression. Tech platforms have routinely censored information deemed “misleading” regarding COVID-19 and the Pfizer and Moderna vaccines, while scientific journals refused to publish papers arguing that COVID-19 originated in a lab. Similarly, censorship of election fraud claims are well-documented, with President Donald Trump, along with a host of other conservatives, being censored for “promoting disinformation.”

But of course, hypocrisy is the point.

An even more disturbing trend has arisen over the past few weeks: disinformation is now increasingly referred to as “dangerous” and is being associated with “domestic terrorism.” In a series of tweets, Juliette Kayyem, a member of the Council on Foreign Relations, characterized Trump’s claims of election fraud as “stochastic terrorism," while domestic terror consultant Daryl Johnson argued in an interview with NBC News that election fraud claims are “pouring fuel on the fire” of “extremist” violence. Even the Union of Concerned Scientists, a national nonprofit with no expertise in electoral politics, has deemed it appropriate to characterize the events at the Capitol as the “predictable outcome of an autocrat’s deadly disinformation spiral.”

What’s absurd is that many of those attempting to establish a link between disinformation and violence are themselves using disinformation to buttress their arguments, and are guilty of the very thing they are accusing Trump of doing: challenging an election without evidence. The claim that former President Trump willfully “incited violence” by alleging fraud and urging his supporters to take action is easily refuted by the actual transcript of his speech. Moreover, if challenging an election without evidence is equivalent to inciting violence, what would three years of Russiagate histrionics be considered? (Ironically enough, Juliette Kayyem wrote several articles advancing the Russiagate narrative.)

But of course, hypocrisy is the point. The “disinformation” label is applied inconsistently in order to silence dissent and further the political interests of those in power. By linking disinformation to violence, censorship of certain narratives, and repression of those who espouse them can be justified under the guise of public safety. This was the justification for banning then-President Trump from Twitter and serves as the justification for expanding government surveillance of American citizens under the guise of stemming disinformation.

Just last month, former NSA general counsel Glenn Gerstell called for an “integrated disinformation center within the federal government” that would employ “counterterrorism” tactics to combat disinformation. It’s not exactly clear what these counterterrorism tactics would entail, but the idea that institutions that so often lie to the public should be able to decide what is and what is not “disinformation," with the help of a surveillance apparatus designed to combat terrorism, is truly unnerving.

As trust in institutions continues to decline, this kind of hostile information control will only escalate.

Other, less overt, forms of censorship and information control have also been proposed on the basis of combating disinformation. Academics at Yale Law, as well as researchers at the RAND Corporation and the Brookings Institute, have each separately argued for an online accreditation system that would determine which information sources are “trustworthy” and “reliable.” The decision as to which sources are reliable would, predictably, be made by a panel of “experts.” Similar tactics such as “whitelisting," in which approved information sources are compiled and publicized, have also been suggested, with actually Facebook implementing a whitelisting strategy this election cycle. If this is allowed to continue, content from establishment-friendly sources will continue to be prioritized by the information infrastructure, while dissenting voices would be ghettoized.

As trust in institutions continues to decline, this kind of hostile information control will only escalate. The incompetence of our government and institutions will continue to be excused, as alternative hypotheses can simply be labeled as misinformation or disinformation. Criticism can be silenced, and poor governance can be spared its natural consequences.

More importantly, it will be increasingly difficult to meaningfully dissent, and ideas, information, and narratives that threaten the status quo will be removed from public discourse. When the only acceptable information is that approved by the ruling administration, there can be no meaningful check on state power. Consent for the establishment agenda can easily be manufactured, and opposition can simply be deemed “disinformation” and treated as “dangerous," deserving of censorship and removal. With a silenced opposition, power can therefore be exercised with impunity.