5,000 National Guard Troops to Stay in DC Through March, Some Returning Home 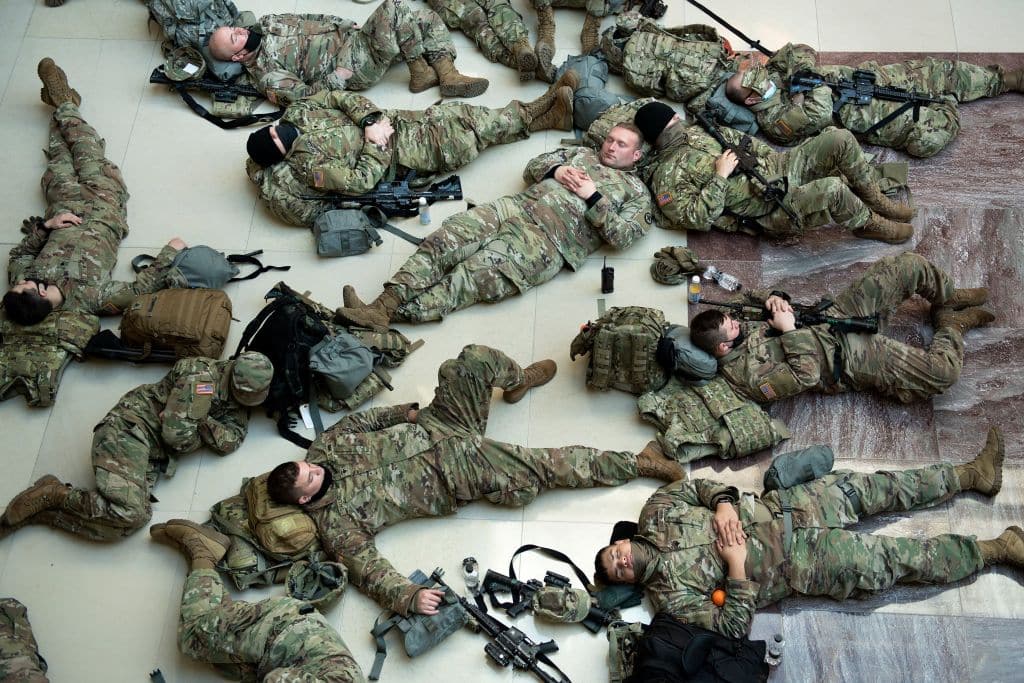 Following a controversial deployment to the nation’s capital to defend and protect the inauguration, at least 5,000 National Guard members will remain in Washington through mid-march.

“As we continue to work to meet the final post-inauguration requirements, the National Guard has been requested to continue supporting federal law enforcement agencies with 7,000 members and will draw down to 5,000 through mid-March,” Maj. Matt Murphy told the Epoch Times.

“We are providing assistance such as security, communications, medical evacuations, logistics and safety support to state, district and federal agencies,” he added.

“Virginia National Guard personnel are remaining on duty following the Presidential Inauguration at the request of local and federal authorities, and they will remain on duty until those agencies no longer require our direct support,” Maj. Gen. Timothy P. Williams said.

“We expect our troops to conduct security-related missions to include crowd control, traffic control and assisting with entry and exit points. We are incredibly proud of the professionalism and dedicated service they have demonstrated throughout this mission, and they will continue to play an important role in helping keep their fellow citizens safe.”

Some Vermont members will also remain in Washington through February.

Tens of thousands of National Guard members flooded the district for Joe Biden’s inauguration, a precaution following the Capitol riot on January 6. Over 26,000 were on duty on January 20 as part of a heavy militarization effort, the Epoch Times reports.

“Some agencies are requesting continuity of operations, additional support, and recuperation time for their forces to regroup. Approximately 7,000 National Guard personnel are anticipated to provide that assistance through the end of the month,” the Guard said in a statement on Thursday.

But, while many will remain in position over the next couple of months, governors from several states are ordering their troops home due to poor housing conditions and a coronavirus outbreak.

Upon arrival, guardsmen were seen sleeping on the floor of the Capitol until they were forced out of the building into a nearby parking garage, despite winter temperatures. The garage reportedly had one restroom with two stalls, and there was also only one power outlet, BizPacReview reports.

“We are bringing home our National Guard members from D.C. They served with distinction,” Alaska Gov. Mike Dunleavy tweeted. “Some guardsmen from other states were treated in a fashion inconsistent with how our service members should be treated.”

“These women and men put their lives on the line for our freedom - that they would be put out to a parking garage in return is appalling. I’ve confirmed that none of our 29 [Arizona National Guard] members were among those displaced. They are headed back to AZ,” Gov. Doug Ducey said in a tweet. “Thank you for your service!”

“It’s time to welcome our TN National Guard soldiers & airmen home today after their mission in DC. Very disappointed in the way this mission came to a close & the overall treatment of the National Guard in DC,” Tennessee Gov. Bill Lee said in a tweet.

Troops from several other states, including New Hampshire,  Montana, Arkansas, Georgia, Florida, Mississippi, Texas and South Carolina will also return home, according to The Hill.

In a Fox & Friends interview, Florida Governor Ron DeSantis blasted the mistreatment of the guardsmen.

“They're not Nancy Pelosi's servants,” he said. “They're soldiers. They've served our country all over the world. They've served our state after natural disasters. They're serving right now, helping with vaccinating senior citizens and they've been on the front lines of the COVID fight.”

Texas Governor Greg Abbot, who sent 1,000 troops for the inauguration, vowed in a tweet that he would never do so again.

“This is the most offensive thing I've ever heard,” he said. “No one should ever question the loyalty or professionalism of the Texas National Guard. I authorized more than 1,000 to go to DC. I'll never do it again if they are disrespected like this.”

Aside from the poor resting conditions, the guardsmen were greeted with a coronavirus outbreak. Reports indicate that somewhere between 100 and 200 service members may have been diagnosed with COVID-19, The Hill reports.

“When National Guard members departed from their individual states and upon arrival to the DC Armory, they had their temperatures checked and completed a screening questionnaire. Masks and social distancing are required where the mission allows,” a spokesperson said. “They are following these procedures daily.”