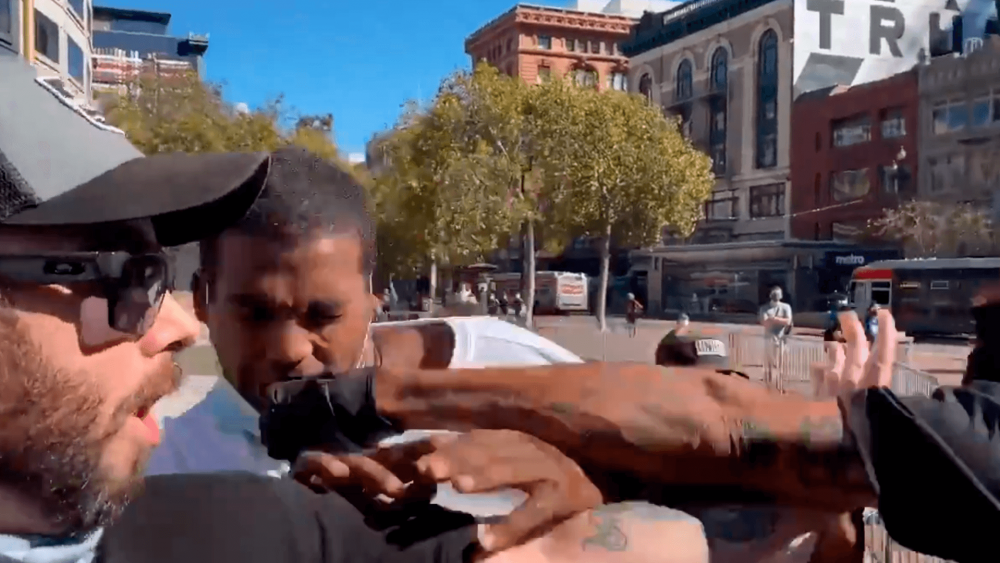 Free speech activist and organizer Phillip Anderson was violently assaulted at a Saturday rally against Big Tech censorship in San Francisco. The assailant has since been arrested and charged with a hate crime, but Anderson’s main concern is the online censorship he says ensued after video and reports of the assault went viral online.

The event, organized by Anderson’s group Team Save America was set to be a demonstration against censorship by Big Tech, but Anderson says it resulted in exactly the type of speech suppression he and his group were organizing against.

“That was all. And they wouldn’t let us do it.”

Anderson says he got banned from Facebook, Instagram, and Twitter in quick succession on Sunday night with little to no explanation after being vocal online about the attack he suffered at the hands of an Antifa activist, who knocked out his teeth.

He says it began with a notice on Sunday that his Facebook had been banned for 30 days. A screenshot of the notice provided to Human Events cites posts advertising the event that “didn’t follow [Facebook’s] community standards” against “dangerous individuals and organizations.”

But “an hour later,” Anderson says his Facebook was shut down completely.

Anderson showed Human Events evidence of at least one instance where a tweet of his, including a video of the assault, was shared to a Facebook account and flagged by Facebook as “False information” that had been “checked by independent fact-checkers."

"I'm like you're saying it's false information that a man hit me in the face and my teeth came out my mouth like are you serious right now?” Anderson said.

"Instagram literally just banned me because the shadow ban wasn’t working anymore after Antifa knocked my teeth out yesterday and everyone was coming to follow me and look at my posts,” Anderson wrote on Twitter Sunday night "Instagram & Facebook are against our right to Free Speech and peaceful protest.”

Anderson says he suspects that social media companies began censoring him and evidence of his attack because it was raising awareness about his group’s campaign against Big Tech.

"At some point, all of them at the top of the article somewhere it says ‘protests twitter, protests against Twitter protest Twitter and big tech.’ That pissed them off. That's what made them mad. It had nothing to do with the event being dangerous.”

He also suspects that the situation is in part the result of “mass reporting” by far-left activists, something he says “should at least be a bannable offense.”

As if it wasn’t enough to have his free speech rally shut down, Anderson says the censorship he is enduring on social media is in many ways more upsetting, pointing out that an “army of white Antifa terrorists, come and also silence” were angling to get a “black guy banned” on social media.

Anderson also told Human Events that in reporting his assault, most mainstream media outlets have misrepresented his event entirely, rejecting a characterization that “only ten to 15” people showed up.” He says in reality, an estimated 70 or 80 people showed up to the event, but were blocked by Antifa activists that showed up early and were “running everyone out of the event.”

“You couldn’t get inside of the perimeter,” said Anderson.

Despite this, Anderson says he invited counter-protesters to speak at his rally with his group.

“I told Antifa that they were more than welcome to come up and give their own speeches. They could call me any last name in the book,” he said.

“They could debate with us,” he said adding that he welcomed anybody present to speak as long as they were peaceful.

Anderson says he is not backing down and is in the process of planning his next rally.

"We're going to stand up this man, and also stand for everyone else who's being banned," Anderson said. "We're going to start a movement that's nationwide. We're not going to take this anymore. Every time they ban every time they censor, we're gonna put that on blast. And the only way they can like try and hide that is by doing more censoring, more banning. And we'll just keep doing it. keep doing it until they implode on themselves"