Biden Didn’t Implode During the First Presidential Debate—But Can’t Tell You Why He Wants to Lead America, Either. 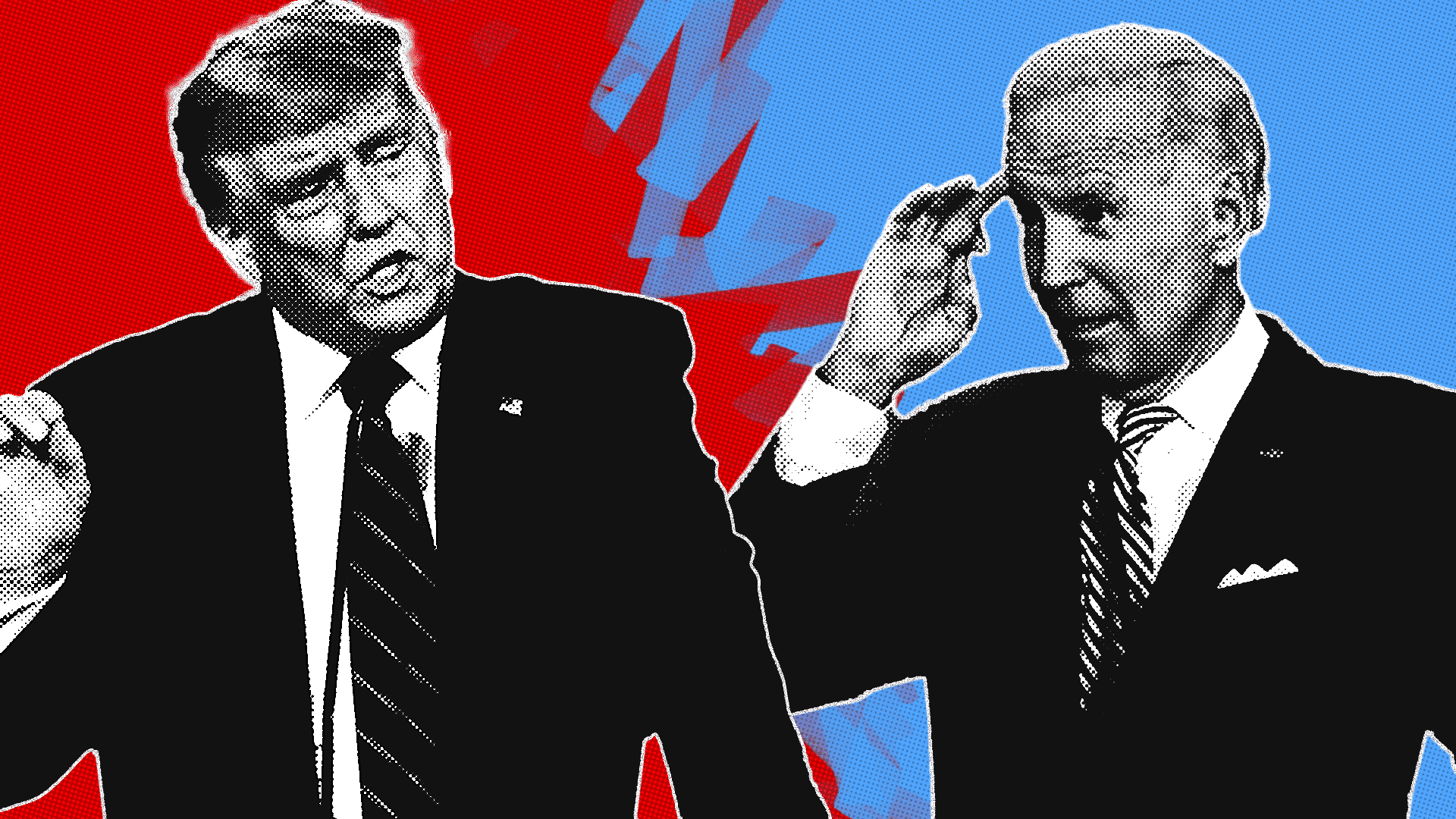 On Tuesday, Americans tuned in to the first presidential debate between major candidates, hoping to determine who has the grit and determination to see us through the rest of the coronavirus pandemic and restore our economy to the luster and glory it possessed just nine months ago. The evening’s proceedings left little doubt that that man is Republican President Donald Trump. As Fox News’ Brit Hume put it, Trump dominated the show like a “bucking bronco” and had the more “forceful personality.”

Former Vice President Biden on the other hand, maintained his position as a career politician willing to say virtually anything to stay at the public trough. The usual gaffes we’ve come to expect from Biden were few, but still embarrassingly present (at one point, Biden suggested one of his sons—it wasn’t clear which one—had received the “Conspicuous Service Medal” for deeds done.)

Early in the debate, Biden announced: “I am the Democratic Party!” (Sounding a bit like French King Louis XIV famously declaring: “L'état, c'est moi.”) Ever the empty vessel, spouting words without any resolve to reinforce their meaning, Biden changed skins less than half an hour later.

The moderator asked Biden if he had ever picked up the phone and called the Democratic mayor of Portland to tell him, given the daily rioting that has defined life there for the past three months, that “this has to stop.” Instead of owning up to his failure, the alleged “Democratic Party” re-positioned himself as a political outsider (something he hasn’t been for 47 years). “I don’t hold public office now,” he replied.

Biden also had the colossal gall to suggest that President Trump—who has been ubiquitous in his election campaigning, rallying voters and shoring up enthusiasm for four more years—was living in a “bunker” or “sitting” at a golf course, reluctant to confront reality. This, of course, from a man who routinely calls it a day before 10 a.m., and has run most of his campaign from his basement. In fact, Biden’s debate appearance was the first time most Americans had seen him not staged in front of a teleprompter and blue screen by his staffers.

Still, the event as a whole was a bit like going to the dentist, having a cavity filled, then being told you have to come back next week for more work. The pain of the experience itself was compounded by the agony in realizing it wasn’t yet over. The long-anticipated meeting of Trump and Biden resembled, at times, the squabbling of two septuagenarian men on a park bench instead of the clash of the Titans we’d all hoped to witness.

THE RACIST DOTH PROTEST TOO MUCH, METHINKS.

During Tuesday’s debate, Biden continued his long-running campaign to paint President Trump as a racist who has allegedly empowered white supremacy. Of course, this accusation is rife with hypocrisy: Biden’s own history on bridging the racial divide in America has been nothing short of squalid.

Clearly, Trump believes much of his re-election hinges upon Biden’s unwillingness to identify the source of the chaos in America’s cities and his inability to confront it.

Recall that this is the same career politician who was once not too concerned about compensating anyone for segregation because he regarded it as a source of “black pride.” Long before he had the 2020 nomination wrapped up, Biden was bragging about how he worked so well with Democratic segregationist senators who populated the chamber when he first arrived there in the early 1970s. (That earned him some heavy criticism from Sen. Cory Booker (D-NJ) and Rep. Ocasio-Cortez (D-NY) who took Biden to task for recalling the civility of his southern colleagues while casually dismissing their segregationist views.)

And who can forget his most insouciant yet damning statements about his racial mentality—the “slave state” comment. On Aug. 27, 2006, while (ironically) being interviewed by none other than Chris Wallace during one of his frequent bids for the Democratic presidential nomination. Biden boasted that he came from a slave state when asked if he’s the least bit worried about being dismissed as a “northeastern liberal” during the race: “You don't know my state. My state was a slave state. My state is a border state. My state is the eighth-largest black population in the country. My state is anything from a northeast, liberal state."

Given Biden’s obvious vulnerability on the issue, President Trump could have moved in for the kill during the discussion of race during last night’s debate. Instead, the President preferred to use the opportunity to discuss law and order. Clearly, Trump believes much of his re-election hinges upon Biden’s unwillingness to identify the source of the chaos in America’s cities and his inability to confront it. In response, Biden went all in on the strategy of accusing President Trump of every kind of racism short of seeking membership with the Ku Klux Klan, and trailing on about utter non-sequiturs like the suburban climate crisis. (When asked, “Are you in favor of law and order?” Biden decided it was time to talk about climate change, suggesting that, if there was violence in America’s suburbs, it was the result of global warming and Trump’s denial of it.)

Eventually, however, the former Vice President offered some clarity about where he stood on the recent rioting. During a now-viral moment that epitomizes the Democratic Party in 2020, Biden professed his belief that Antifa is “an idea, not an organization,” and refused to condemn their violence.  (Are those mere ideas looting and torching buildings across America?)

A DEBATE MADE ALL THE MORE FRUSTRATING BY AN INEPT MODERATOR

Chris Wallace, a Fox News anchor who is often hated by conservatives because he does not reflect the ideological tendentiousness of colleague Sean Hannity, did not enjoy his finest hour Tuesday night. In fact, he was rebuked by Trump at the beginning of the debate, who said: “I guess I’m debating you [Wallace], not him. But, that’s okay. I’m not surprised.”

The debate format itself was frustrating, with Wallace posting two different questions to each candidate, and the candidates an opportunity for rebuttal, even after the most outrageous claims. Of course, that didn’t stop Trump or Biden from speaking out of turn and providing rejoinders, resulting in something that resembled a raucous political argument despite Wallace’s repeated attempts to inject order into the process. But given the format, order just wasn’t an option, and the more Wallace insisted upon it, the less control he exerted.

More than once, Biden came close to losing his temper, leveling personal insults and ad hominem attacks against the President. He called Trump “a racist” “a clown,” and “a fool.” There was even a time when the former senator from Delaware saw fit to tell the President of the United StatesTrump to “Shut up, man!” (To be fair, Biden wasn’t the only one to get heated. Trump, growing weary of Biden’s boasting at one point in the debate, Trump said, “Don’t ever use the word ‘smart’ with me.”)

It wasn't just that Wallace couldn’t control the candidates—he couldn’t hold them accountable, either. The newsman can usually be described as tough and fair on both corners of the political debate. Still, his liberal bias on climate change was made obvious during a segment of the debate when he insisted Trump accept Biden’s claim that the California wildfires being a direct result of climate change and not poor forest maintenance. Wallace also allowed Biden to retreat from difficult questions, and failed to challenge some of his more outrageously stupid remarks—such as suggesting that police should show up at the scene of a violent crime with a psychiatrist in order to assess the potential danger of the assailant.

Biden also refused to answer—again—a straightforward question about packing the Supreme Court. He has already said that he won’t answer the question because he doesn’t want “to play the President’s game,” and he repeated the line Tuesday night. Biden pivoted, instead, to Democratic Party talking points about the need to vote—although he might as well have shifted to a discussion about California vineyards because it had nothing to do with a plan that many Democrats are talking about to add additional seats to the court to overcome the conservative majority and ensure a liberal, activist institution.

Wallace did try and remind Biden that it had not been Trump who had raised the issue of packing the Supreme Court, but the Democrats, but this was not enough to prompt a credible or articulate response from the Democratic nominee.

The former Vice President was also not pressed by the moderator on the numerous scandals and allegations of political corruption surrounding his son, Hunter. He was eventually confronted by Trump, who asked Biden about the remuneration Hunter received from Ukrainian energy firms and the $3.5 million he received from the widow of Moscow’s former mayor. Biden dismissed the charges as being “totally discredited.” Of course, the scandals about Biden’s son have been all but ignored by most of the mainstream media, but that shouldn’t absolve the supposedly nonpartisan moderator tasked with ensuring both candidates received their share of heat on behalf of American voters.

Trump, for all his boasting and bravado, actually has a record to run on. He did not inherit a “booming economy” from the Obama-Biden administration; he fostered unprecedented growth through shrewd fiscal policies. During his first term, he delivered on promises to slash government regulations, reduce taxes, restore military funding, and provide a Supreme Court with judges who will apply the Constitution and not reimagine it.

The road of political expediency has usually been a safe and secure one for Biden, who has effortlessly moved from the right-hand side to the left.

Biden, meanwhile, has spent much of his adult life in government, and has occupied virtually every ideological space available in a democratic society. He has moved from a law and order, race-baiting Democrat, to a radical progressive in harmony with socialists like Sen. Bernie Sanders (I-VT). The road of political expediency has usually been a safe and secure one for Biden, who has effortlessly moved from the right-hand side to the left. But it has always been about staying in power—no matter what principle he had to sacrifice or what policy he had to forgo to get there.

Merely getting through a debate without suffering a complete mental collapse (and managing to conceal his inability to know where he is or for what office he is running for) is not a satisfactory reason for Joe Biden to assume the presidency. That he continues to have these moments—and undoubtedly will again during the next two debates—while overseeing a threadbare campaign without any serious media scrutiny should only provide us cause to wonder why on earth he continues to lead in many polls.

But, after 47 years, Joe Biden is still not ready to be President. President Trump put it best, repeating a line that he has been using often at rallies recently: “In 47 months I’ve done more than you’ve done in 47 years, Joe.”

President Trump, meanwhile, is more than prepared to begin his second term. Hopefully, next time, he will be provided with a debate format the next time around that actually allows him to articulate his vision for the next four years.