Kneeling To BLM Is Not the “Pride Of The Yankees.” 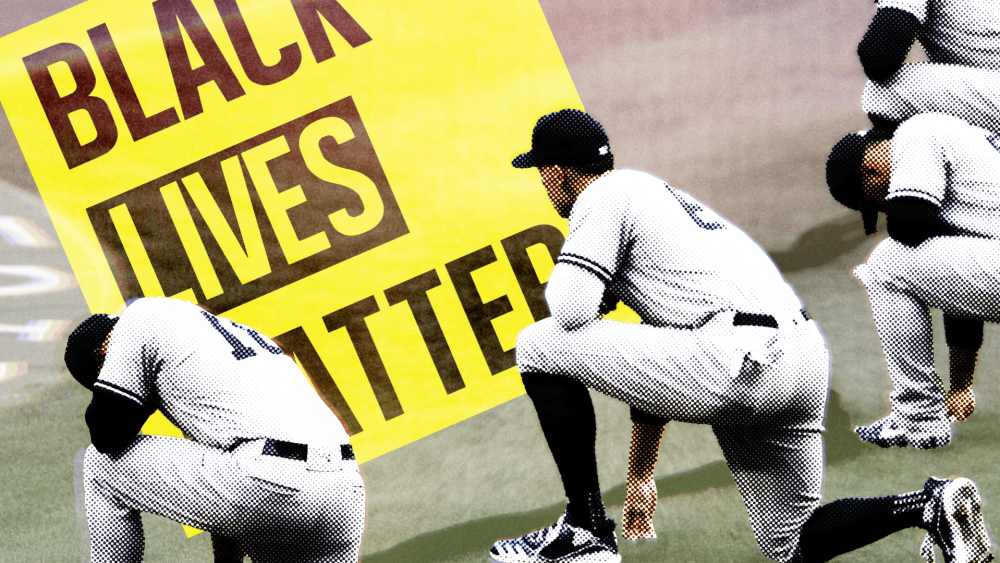 Every New York Yankee kneeled when the national anthem was played during the opening game of the condensed baseball season last week. Every single player. And they were so proud of their movement that they posted it on Twitter.

We can thank former San Francisco 49ers quarterback Colin Kaepernick for inaugurating what began as an eccentric gesture somehow meant as protest against police brutality aimed at black people. Kaepernick first just sat out the playing of the national anthem, but, by Sept. 1, 2016, he theatrically escalated to “taking a knee,” generating a thunderstorm of controversy.

Kneeling not only became an instant pre-game tradition in the league, it spread throughout professional sports.

The National Football League (NFL) did not condemn the player’s decision, but merely said it “encouraged” its athletes to stand for the anthem. Because it refused to get tough on the protest, professional sports allowed it to be normalized, and a solitary protest against a highly debatable contention became a trend. A decision in 2018 to ban kneeling quickly dissolved as the league withered under a barrage of criticism that preventing players from kneeling during the anthem was divisive.

Kneeling not only became an instant pre-game tradition in the league, it spread throughout professional sports.

Almost four years later, entire teams are kneeling. These athletes apparently lacking the will or the courage to challenge the meaning behind the act—an meaning that, after it has been appropriated by Black Lives Matter (BLM) to promote its larger Marxist agenda, has expanded to imply oft-repeated claim that “systemic racism” drives police forces to routinely oppress and brutalize black Americans.

There are only a handful of professional athletes who are saying no to kneeling to the mob. San Francisco Giants pitcher Sam Coonrod was apparently the only player on baseball’s opening night to say no. As a Christian, he said he couldn’t knee to anybody but God—what, not the mob? Not the Marxists behind BLM? As inspiring as Coonrod’s story is, it is remarkable that, in a country that is still so affected by evangelical Christians more, of them have not shown their opposition to kneeling before a discredited political force like BLM.

As a Christian, he said he couldn’t knee to anybody but God—what, not the mob? Not the Marxists behind BLM?

Kaepernick has very successfully advanced his agenda—if not his sports career. It is no longer  clear whether he is a football player who enjoys self-promotion and political causes, or a social justice activist who also happens to play football. He’s not played much ball in the past four years, but has managed to land some lucrative endorsement contracts for someone apparently in early retirement, including multinational sportswear manufacturer Nike and recently with Disney.

Although he hasn’t accomplished much on the playing field, Kaepernick has, it seems, achieved a victory of sorts.  In June, the NFL announced that it would be donating $20 million to “challenge the injustice around us” while affirming it was going to march in lockstep with Black Lives matter because the organization was synonymous with “the black community.” Moreover, Kaepernick has successfully propagated his kneeling campaign to all professional sports.

But it is one thing to announce financial contributions and tweet statements of support on social media. It is another thing to see an entire ball club prostrate before BLM. By kneeling en masse, the New York Yankees have not only endorsed this conversation, they have repudiated the need to at least debate the hopped-up charges of police racism.

Since their inception as a Major League Baseball team in 1913, the Yankees have defined baseball and baseball stars for America: Babe Ruth, Lou Gehrig, Joe DiMaggio, Mickey Mantle, Roger Marris, Reggie Jackson, and on, and on, and on.

Lou Gehrig, who was immortalized in the 1942 film Pride of the Yankees with Hollywood icon Gary Cooper, became a Triple Crown player who set a record for consecutive games played that only ended because Gehrig was diagnosed with ALS—a disease that became known as “Lou Gehrig’s Disease.” Both Gerigh and Cooper became immortalized by saying, “I’m the luckiest man on the face of the earth,” as a testament to the team, the player and the man.

These are not just names; they are legends of Americana.

But those same iconic Yankees decided to tread on their history, their heritage, and their link to America last week when every team member decided to show their contempt for America and its anthem by dropping to one knee. This whole display was shameful; it was a moment when America’s ball club denied America. And all of those overplayed athletes who are paid millions for playing a kid’s game had the casual nerve to denounce a country that has made them rich and famous. They wouldn’t have achieved that sort of fame and fortune in Soviet Russia and they wouldn’t in Communist China today. But by kneeling to the Marxist forces of Black Lives Matter, that is exactly who these sports stars are worshiping.

THE CIVIL WAR IN SPORTS

Wars have traditionally accelerated social and political change to a degree that is not possible in static, peaceful times. The Civil War eradicated the Old South and wiped out the region’s wealth for a century. The First World War ended three monarchies in Europe and inaugurated a communist government in Russia. We are currently in a civil war against groups that espouse anarchy and Marxism. Of course, the November election will decide who has ultimately won that war, but popular culture—in the form of professional sports—is declaring its allegiance with anarchy and Marxism has won.

From boxing to baseball, African-American athletes have demonstrated not only their outstanding playing abilities but have been graceful and courageous voices for racial equality in the public forum.

Ironically, professional sports has been one of the great equalizers in American society. From boxing to baseball, African-American athletes have demonstrated not only their outstanding playing abilities but have been graceful and courageous voices for racial equality in the public forum. Seven years before the Supreme Court ordered school integration in 1954, Jackie Robinson broke the color barrier in baseball by playing with the Brooklyn Dodgers in the 1947 season.

As if to demonstrate this, some of the angriest and most visceral criticism of pre-game kneeling has come not from cranky white supremacists who supposedly lurk under every bed in President Donald Trump’s America, but from black athletes. Pittsburgh Steeler star Stephon Tuitt tweeted: “Also I’m not kneeling for the flag and screw anybody who have a problem with that. My grandmother was a immigrant from the Carribean and … worked her ass off to bring 20 people over the right way. She had no money and educated herself to be a nurse. She [is] living good now.”

Then there’s retired football great Jim Brown, who defiantly indicated his objections to kneeling: “I am not going to denigrate my flag and I’m going to stand for the national anthem,” he told Fox News. “I’m fighting with all of my strength to make it a better country, but I don’t think that’s the issue. Because what is the top side? Are you not going to stand up? This is our country, man.”

Sports and entertainment should never define American politics—but let’s face it, they do.

Sports and entertainment should never define American politics—but let’s face it, they do. While we live in a world where people actually listen to model and actress Chrissy Tiegan’s take on current affairs, we should acknowledge that popular culture has often become political culture in this nihilistic age.

Whether an athlete was blessed to be born in the United States or had the good fortune to have emigrated here, they are living in the last country in the world where freedom of speech is not a wish but a reality. No where else could they earn millions of dollars a year for just having fun.

And what does this say about America in the summer of 2020? Does such contempt for the flag and such admiration for rioting exist that coddled ball players would so matter-of-factly pronounce their distaste for democracy?

Perhaps we should not be surprised to see so many in professional sports prostrate to BLM and its divisive message. Washington DC police actually kneeled in front of the very protesters who wanted them abolished or defunded. Democratic politicians have put themselves ludicrously on display taking a knee.

It’s a confused moment when disrespecting your national anthem has become “patriotic.”