Debunking the Dream of the Non-Violent State. 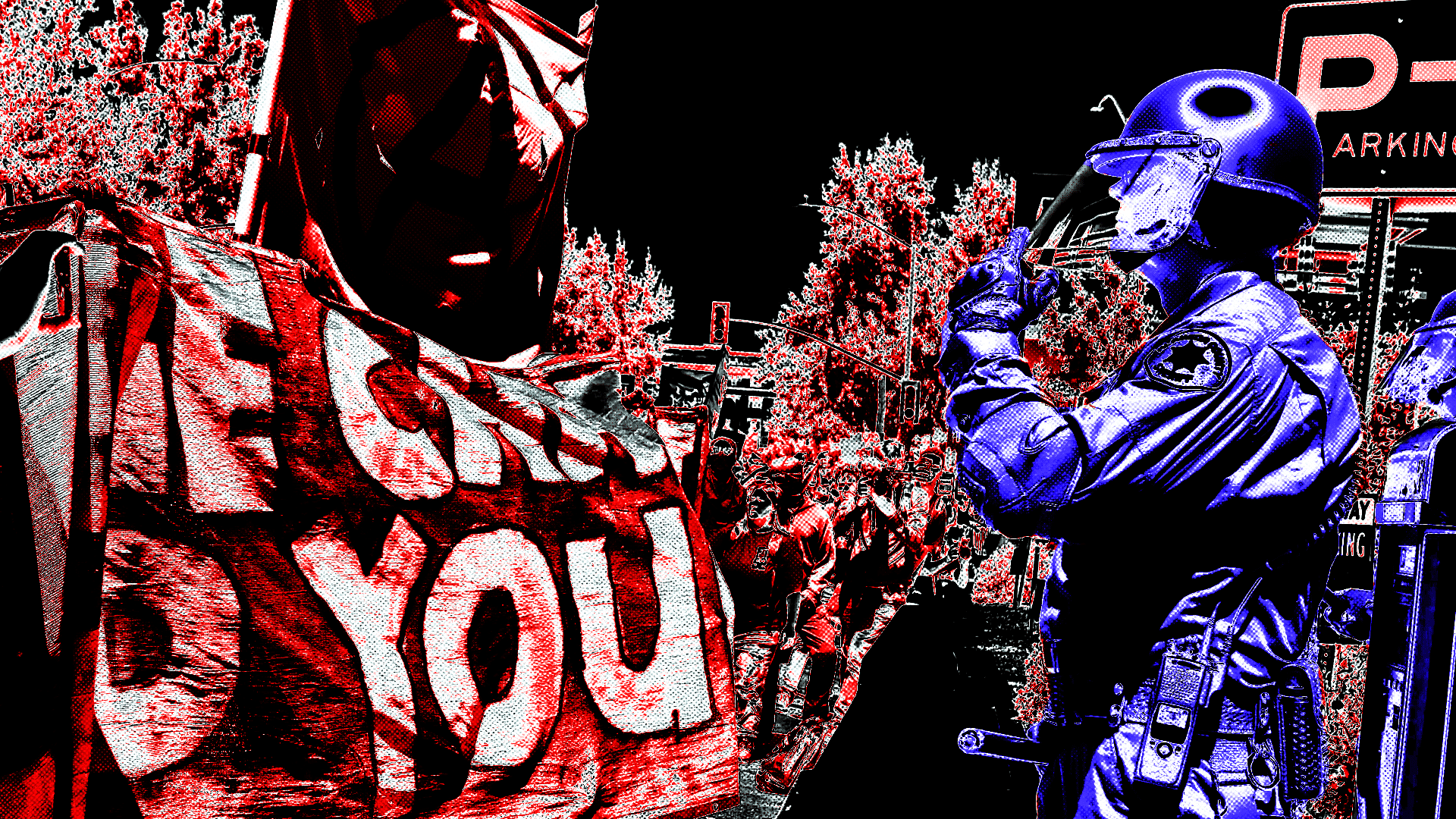 On his website, Vox, Ezra Klein recently posted an essay called “Imagining the Non-Violent State.” Klein argues that “America has a particularly violent state, and it has a particularly violent society.” He further suggests that our nation has chosen the path of violence, implying that a different path might have been chosen, perhaps a path of non-violence imagined by Martin Luther King and Gandhi.

Clearly, the left has taken a very expansive view of violence; it is no longer limited to real physical acts of violence.

Undeniably, Klein’s dream is a beautiful one, but it’s a belief that, sadly, shows a fundamental misunderstanding of what a state—and by extension, human nature—is. It makes sense that many would dream of a non-violent state, particularly at this moment, when the horrific vision of a policeman’s knee extinguishing the life of a black man is so vivid in our collective memory. And no one can argue why this image stands as an archetype of state violence.

But it must also be noted that commentators on the left (like Klein) have spent the past few decades greatly delimiting the concept of “violence.” Alongside these commentators, the work of cultural and linguistic theorists such as Herbert Marcuse (see “Repressive Tolerance”), Judith Butler (see “Burning Acts, Injurious Speech”), and J.L. Austin (see How to Do Things With Words), began to assert that acts of speech perceived as offensive by some constitutes actual violence.

A whole host of jurisprudential and regulatory interventions followed this intellectual movement, aimed at the idea of restricting “hate speech.” In the 1990 case, Brown Transport Corp. v. Commonwealth, a Pennsylvania court ruled that it was harassment for an employer to put religious-themed articles in the employee newsletter. In 2016, Newsweek reported that “more than half of America’s colleges and universities now have restrictive speech codes.” And this is to say nothing of the censoring of speech by administrative fiat in corporate workplaces.

Now, in 2020, we are greeted with signs on street corners that read “White Silence = Violence.”

Clearly, the left has taken a very expansive view of violence; it is no longer limited to real physical acts of violence. And because of the left’s extreme theorizing, we have arrived at a point where the simple refusal to speak is lambasted as a form of violence.

If progressives are serious in advancing this understanding of violence—and we have to assume they are—then it begs the question: what would Klein’s “non-violent” state look like?

THE STATE AS VIOLENCE

Where Klein’s theory of non-violent statehood runs into problems is in two key assumptions he makes: (1) that violence is a tool of the state, and (2) that the American state makes particularly grievous use of this tool.

But why is violence inherent to statehood? Because through government, a state seeks to impose a regimented social order—an order that the natural world and human nature are bent on defying.

He’s unequivocally wrong about the latter; we don’t need to go any further back in history than the 20th century to find numerous, glaring examples of states that have made far more frequent, more expansive, and more brutal uses of violence than the United States. In fact, this country has sacrificed much blood and wealth to end various injustices of this kind abroad.

But Klein also errs in his first assumption. Violence is not a tool of the state; the state is violence.

Klein is dimly aware of this fact—in his essay, he quotes from Politics as a Vocation, where sociologist Max Weber explains that the central attribute of the state is its “monopoly of the legitimate use of physical force.” Klein remarks in his essay that “it is profound to put violence at the core of the successful state.” Here, he implies that this was a choice made by design. What he doesn’t grasp, however, is that the formation and maintenance of the state—any state—is violence, and state violence is an inherent feature of statehood.

This is demonstrated at length in James C. Scott’s recent book. Against the Grain: A Deep History of the Earliest States (2018). Scott, a Sterling Professor of Political Science at Yale, has spent much of his career developing a historically-informed concept of what a state is. Against the Grain is an elaboration of an idea from Pierre-Joseph Prudhon (a 19th-century French philosopher and self-identified “anarchist”) that Scott references: “To be governed is to be at every operation, at every transaction, noted, registered, counted, taxed, stamped, measured, numbered, assessed, licensed, authorized, admonished, prevented, reformed, corrected, punished.” In short, the state’s survival and vitality depends on an unceasing, far-reaching effort to regulate virtually every aspect of an individual’s life.

Scott’s theory has tremendous implications for our concept of statehood. Government—not violence—is a tool of the state, and governing is a violent, interventionist enterprise. The Founders of our nation grasped this; it’s why they imagined a limited government.

But why is violence inherent to statehood? Because through government, a state seeks to impose a regimented social order—an order that the natural world and human nature are bent on defying.

Throughout Against the Grain, Scott talks about how “urban institutions” have “domesticated” human beings. He doesn’t mean that they became more peaceful or civil. By domestication, he means the ways that external forces re-shaped human beings in such a way that they could serve as productive subjects in a state regime. In this way, the state is a mechanism of civilization: the impositions and interventions of the state (which, by the left’s current understanding, would certainly qualify as violence) serve to limit human impulses, the kind of anti-social impulses that are antithetical to a highly-organized society.

“Women in grain villages had characteristic bent-under toes and deformed knees that came from long hours kneeling and rocking back and forth grinding grain. It was a small but telling way that new subsistence routines […] shaped our bodies to new purposes.”

For example, regulations and prohibitions on various drugs (justified in the interest of “public safety”) are imposed, in part, because widespread drug use or addiction might hinder the proper function of the labor force needed to achieve the objectives of the state. Another example: many of the laws related to family formation and dissolution (laws related to marriage, abortion, divorce, and child care) were determined by what sort of families are necessary in a modern state. Throughout his book, Scott gives numerous examples like this, of state intervention in early societies—interventions that “violently” restricted individual agency, but fashioned a strong state unit.

Progressives like Klein often suppose that a highly regimented administrative state is a precondition for human liberty and autonomy. This is why their attempts to expand freedom always require an expansion of the state. But, interestingly, Scott contests the common idea that early humans were eager to transition to urban, domestic life. He points to “massive evidence of determined resistance by mobile people everywhere to permanent settlement, even under relatively favorable circumstances. Pastoralists and hunting-and-gathering populations have fought against permanent settlement, associating it, often correctly, with disease and state control.” He continues, “there is no reason why a forager in most environments would shift to [arduous] agriculture unless forced to by population pressure or some form of coercion.”

The forms of state violence that were implemented to overcome the barriers to domestication were many. Scott points to forced agricultural labor, taxation levied upon the grain harvests, and border walls that served to keep the taxpayers in as much as to keep the barbarians out. Indeed, the forms of labor required to produce the material surpluses needed for the survival of the state inflicted a great deal of violence on the bodies of its subjects. Scott notes that examining the bones of people in early states bear this out: “Women in grain villages had characteristic bent-under toes and deformed knees that came from long hours kneeling and rocking back and forth grinding grain. It was a small but telling way that new subsistence routines […] shaped our bodies to new purposes.”

Then, as now, state power was the engine of that coercion—the same kind of coercion that we typically understand as a form of violence today. (Unless, of course, we’re coercing Christian bakers to bake cakes for gay weddings or coercing the Little Sisters of the Poor to provide abortifacients).

Against the Grain demonstrates that, from the earliest emergence of state power, it has been a violent enterprise. The fact that every state in the history of the world has been maintained through violent interventions shows that violence is a core characteristic of the state.

Essentially, the left wants the social order that only a state can provide, but without violence—which is to say without a state.

In fact, we could go as far as to say that government is a synonym for a particular form of violence. It isn’t a tool a state chooses; rather, the maintenance of any state (which itself is the primary function of every government) is a highly orchestrated regimen of physical, cultural, and ecological violence and coercion.

A sober engagement with that question is critical because it demands that we approach social change with realism. It keeps our heads out of the utopian clouds that make reformers like Klein overreaching and hasty. Effective change will require an agreement on the necessary forms of state violence—a discussion the left shows no appetite for. Instead, they incessantly demand the immediate abolition of certain forms of violence, while they ignore the violence imposed by moral cruelties that advance their own agenda.

Conservatives in America have always been skeptical of state power precisely because they recognize the existence of the state is premised on an organized exercise of violence—physical, cultural, and ecological. And conservatives rightly reject the muddled, historically incoherent view of the state that progressives often advance. The last three months have clarified this truth: one day the state says we don’t need masks, the next day people who gathered to protest government-imposed lockdowns are enemies of the state because they aren’t wearing masks. A week later, there are riots in the street against state violence, attended by large numbers of people without masks, and they are celebrated as heroes.

Essentially, the left wants the social order that only a state can provide, but without violence—which is to say without a state. And tragically, in their incandescent rage at state violence as evidenced in police killings, they call for the end of qualified immunity and universal use of body cameras by officers. Conveniently, these checks on state violence are to be achieved through a legislative act of state power. But a reduction of state violence would require a reduction in the size of the state.

Given that Klein and others on the left routinely call for the expansion of the state as the solution to every problem, we see that their concern is not for state violence in general. Rather, their concerns are strictly limited to the exercises of violence that are not conducive to the left’s transformation of the nation. Paradoxically, their calls for “non-violence” are the opposite of what they purport to be: they are a coercive power-play meant to advance purely ideological interests. Such sophistry only tarnishes their cause.