Of Course The New York Times is Carrying Water for Joe Biden. 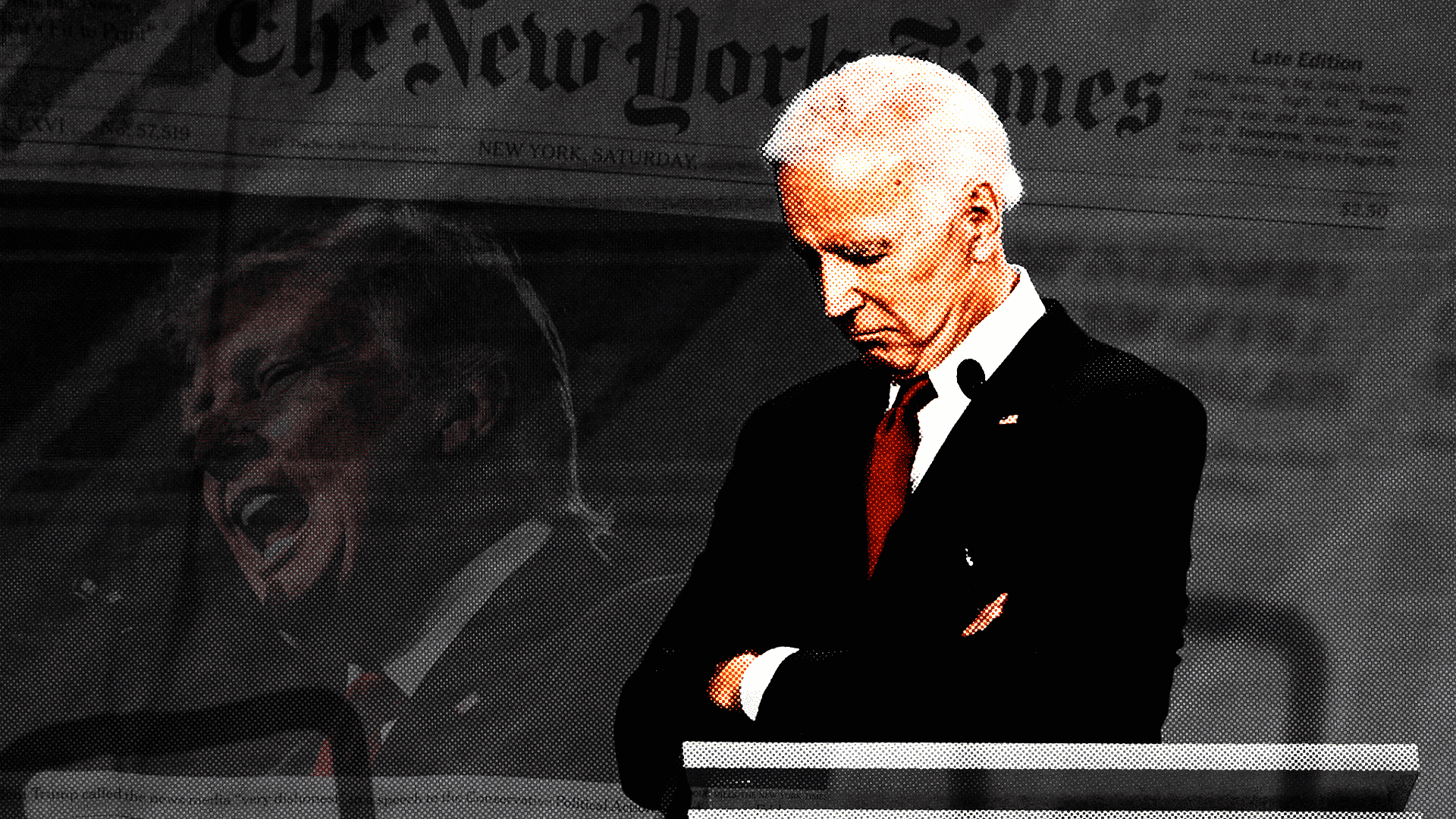 The New York Times’ recent fumble over Tara Reade’s allegations against Joe Biden was almost comical. Reporters Lisa Lerer and Sydney Ember published a lengthy and dry examination of Reade’s ordeal, writing that “Ms. Reade, a former Senate aide, has accused Mr. Biden of assaulting her in 1993 and says she told others about it. A Biden spokeswoman said the allegation is false, and former Senate office staff members do not recall such an incident.” Portions of the article take on an almost menacing tone: the writers warn (Ms. Reade, presumably) that: “Filing a false police report may be punishable by a fine and imprisonment.”

The article’s publication was accompanied by a thread on the Times’ Twitter account—and that's when things started to go sideways. Six or so hours into an epic ratio, the Times tweeted that they deleted one particular tweet because it “had some imprecise language that has been changed in the story.”

Of course the problem with the language was not imprecision, but that it was all too precise: black-letter tort law holds that a battery is a “harmful or offensive touching"; a pattern of giving young women unwanted hugs and kisses, and touching them inappropriately, is very much a pattern of sexual misconduct.

The same day as Lerer and Ember’s piece came out, the New York Times also published an editorial by Mr. Biden himself. Biden’s article, “My Plan to Safely Reopen America: an effective strategy to beat the virus is the ultimate answer to how we get our economy back on track,” was accompanied by a stunning portrait of “the presumptive Democratic nominee for president.”

All this begs the question: is the New York Times running interference for Joe Biden?

But let’s put this performance side by side by the Times’ coverage of another set of allegations—those against Judge Kavanaugh. Christine Blasey Ford’s allegations were not treated with the same objective distance as Reade’s by the paper of record. In Ford’s case, the Times went out of their way to add embellishments and biographical vignettes to make Ford’s story compelling, and Ford herself seem trustworthy. The Times quoted a colleague of Ford’s from the USC School of Education about Ford being “very meticulous with data,” and “doing good science,” which hardly seems relevant to the truth of her allegations.

Remember, too, the farcical article about Deborah Ramirez, titled “Brett Kavanaugh Fit In With the Privileged Kids. She Did Not.” The New York Times did some (not-so-stealth) editing to that piece as well, ostensibly negating a substantial bit of corroborating evidence against Judge Kavanaugh.

An earlier version of this article, which was adapted from a forthcoming book, did not include one element of the book's account regarding an assertion by a Yale classmate that friends of Brett Kavanaugh pushed his penis into the hand of a female student at a drunken dorm party. The book reports that the female student declined to be interviewed and friends say that she does not recall the incident. That information has been added to the article.

The first impulse of conservatives might be to demand that Biden, too, be dragged through the mud of conjecture and malicious reporting—and that’s perfectly understandable. But if we pause for a minute to understand why the two public figures are being afforded such contrasting treatment, a different strategy emerges.

If you’re a liberal, you will get the benefit of the doubt where the media is concerned.

Webster’s dictionary defines “privilege” as “right or immunity granted as a peculiar benefit, advantage, or favor.” Some conservatives scoff at this term, especially given how often phrases like “white privilege” get used as rhetorical bludgeons. But I think privilege can be a useful concept; I think it can denote a broad statement about how people get treated in society. Certain attributes can give you certain benefits.

If you’re a liberal, you will get the benefit of the doubt where the media is concerned. Your comments will be interpreted more charitably, accusations against you will be treated with serious skepticism, and it is a far simpler matter to be exonerated.

One only needs to remember the saga of Joy Reid: “the MSNBC host penned a litany of disparaging remarks targeting the LGBTQ community in the 2000s on her public blog. After conservatives drew attention to her posts, Reid asserted—without evidence—that the posts, which have long since been documented and archived, were the result of a hack. The fictional ‘hacker’ was of course never found, and yet Reid retained her show on MSNBC.”

Liberal media privilege is structural: “Progressives dominate the mainstream media outlets in this country; from all the major broadcast networks, to two of the three cable news networks, to the New York Times, the Washington Post, and every other major print publication.”

Conservative activists have tried a breadth of strategies to overcome this peasant-status: they’ve launched their own media and content channels, they’ve boycotted mainstream outlets, and our President, in solidarity, has spoken up against the fake news industry.

These tactics have had minimal impact, however, given how much power liberals have over both mass and social media. “[W]ith the mainstream media losing credibility among conservatives, they had to change their approach. Now, their source of power is their ability to bully corporations into de-platforming unapologetic conservative influencers.”

They’ve also had minimal impact because conservatives tend to shy away from aggressive action against the media and press, in large part because of their fealty to the First Amendment.

Remember the second rule of wartime conservatism: assume your adversaries are acting in bad faith. And in a world in which the press is actively wielding the First Amendment to malign, defame, and injure conservative public figures, we need to use every tool available to us to put the screws to the media.

Since Republicans do not have media privilege, they should use the other tools at their disposal to weaken mainstream media organizations, and thus limit their ability to harm our public figures through their defamatory reporting.

The ruling effectively destroyed defamation law in this country; in no other country in the industrial world can the press act with this kind of impunity.

Last year, Justice Clarence Thomas argued that New York Times v. Sullivan, the famous Supreme Court case that established “actual malice” as the standard of intent in defamation cases brought by public figures, should be overturned. This landmark case, and the standard it promulgated, made it almost impossible for American public officials to successfully sue the press for defamation without proving, through written evidence, that the press were knowingly lying. The ruling effectively destroyed defamation law in this country; in no other country in the industrial world can the press act with this kind of impunity.

New York Times should be reconsidered.

Arguing against Justice Thomas’ position, Daily Beast columnist Jay Michaelson complained that overturning New York Times would have a “chilling effect” on the free press and that as a result, “no newspaper could report on as-yet-unproven but credibly sourced allegations—regarding Russian kompromat against our president … or regarding sexual harassment allegations against a Supreme Court Justice.”

The irony is almost too much to bear. Michaelson’s justification for upholding New York Times is that the media would not have published and popularized two flat out hoaxes: Russiagate and the Kavanaugh smear. Overturning New York Times is only an affront to “free speech” within a progressive frame; negligent journalists and media outlets should be held accountable when they spread falsehoods and destroy people’s reputations.

The First Amendment and aggressive libel law can coexist; they did so for nearly 200 years of our nation’s history. Overturning New York Times will focus the media’s attention on what’s true—which, in this case, is that in their own estimation, Joe Biden is guilty of sexual misconduct.

Editor’s Note: check out our YouTube video on the same subject, here.