How Propaganda Gets Transmitted from China to Leftist Influencers. 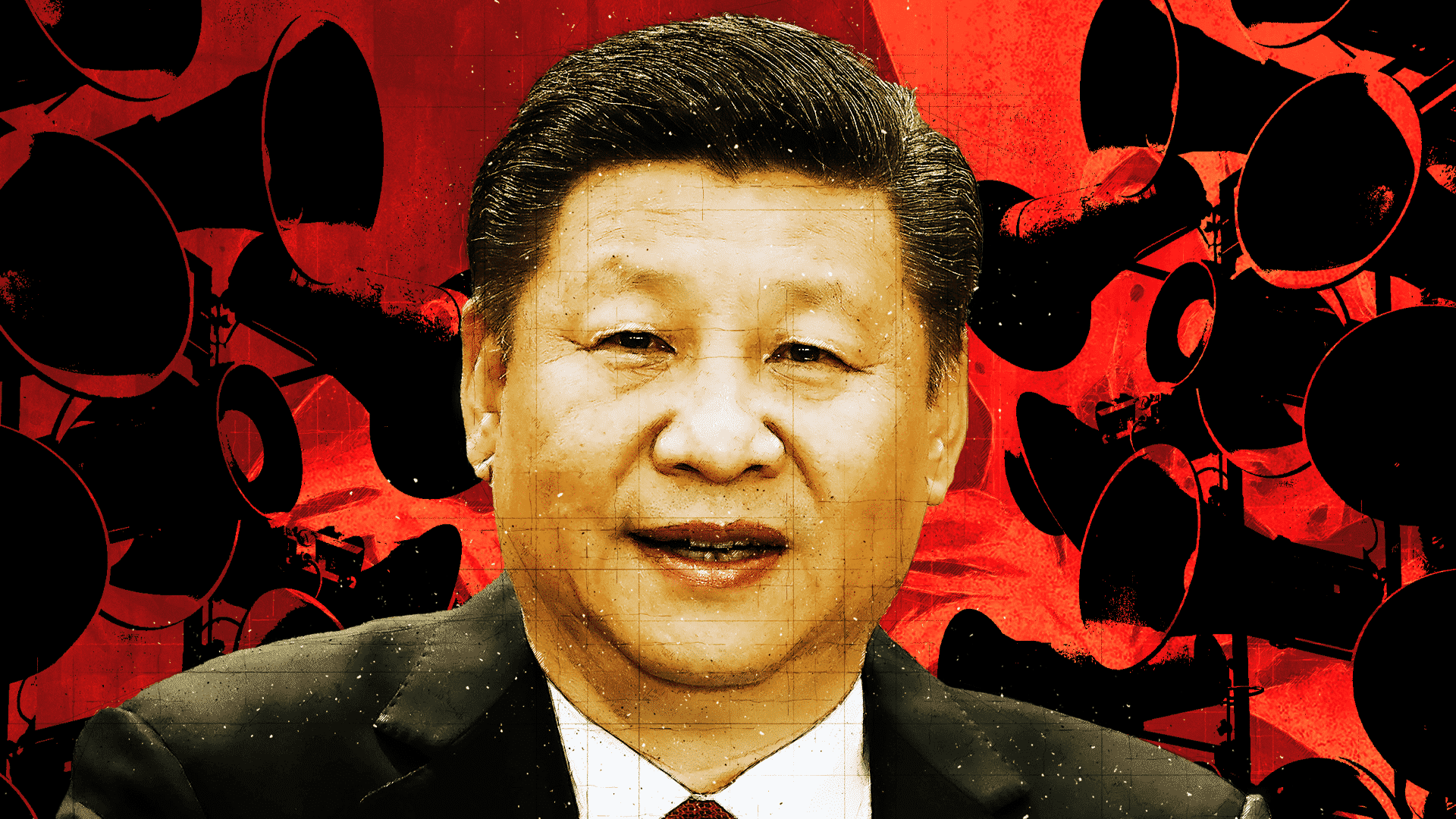 “Donald Trump is racist.” This charge from the left is neither new or interesting anymore; it’s followed the President around since his escalator ride in 2015. So when the mass-and-social media left rallied around this marquee to challenge the Administration’s insistence that COVID-10, which originated in Wuhan, China, was Chinese, most on the right just rolled their eyes.

I mean—what else is new? To the left, we’re all racist.

At Wednesday’s White House press conference, reporters demanded he defend the phrase “Chinese virus.” He provided an unambiguous answer: "It's not racist. It comes from China,” said the President. "I have great love for all of the people in our country, but China tried to say at one point that it came from American soldiers. That can't happen. That won't happen. Not as long as I'm president. It comes from China."

Nevertheless, American media elites seem deeply agitated by the phrase “Chinese virus.” “Why do you keep calling this the Chinese virus?” ABC News’ White House reporter Cecilia Vega asked President Trump. “There are reports of dozens of incidents of bias against Chinese Americans in this country. Your own aide, Secretary [Alex] Azar, says he does not use this term. He says ethnicity does not cause the virus. Why do you keep using this?”

“Because it comes from China,” the President replied. “I want to be accurate.”

To the Administration, the issue is clear: China must be held into account for the pandemic that’s currently destabilizing the global markets and causing innumerable people to die needless deaths, had they only been transparent about the outbreak and contained it.

But to the blue checkmark baizuo, this reality falls on deaf ears. With an intensity that extends beyond Trump Derangement Syndrome, social justice thought leaders continue to defend a line that exposes an unbroken and downright dangerous line of transmission from the Chinese Communist Party to Western media, both mass and social.

Coronavirus is not the only thing that comes from China—social justice talking points do too.

Chinese state media and media officials have waged a deliberate and malicious campaign to deflect blame for the pandemic, going as far as to spread lies about its origins. Even CNN couldn’t help but notice: "Parts of Chinese social media, and even the country's government, appear to have launched a concerted campaign to question the origin of the novel coronavirus, which has infected more than 125,000 people globally."

Last Friday, Chinese Foreign Ministry spokesman Zhao Lijian tweeted out to his more than 300,000 followers that it was the United States military that possibly brought the disease to China.

Zhao republished the March 11th congressional hearing of Robert Redfield, director of the CDC, who said some influenza deaths in the U.S. were later identified as cases of COVID-19. In the clip, Redfield doesn’t mention when those people died or over what time period, but Zhao used his remarks to claim that the coronavirus did not originate in Wuhan.

He, of course, offered no evidence to substantiate the claim. “It might be US army who brought the epidemic to Wuhan,” he wrote. “Be transparent! Make public your data! US owe us an explanation!” Zhao followed his post with another, this time linking to an article that established, he alleges, “Further Evidence that the Virus Originated in the US.” “Please read and retweet it,” he urged.

At his urging, the conspiracy theory was republished by Chinese state media, including in the nationally broadcasted CCTV and in the Global Times. On Tuesday, China Xinhua News published a PSA titled “Racism is not the right tool to cover your own incompetence.”

Of course, brazen lies and misinformation from CCP officials are hardly surprising—Human Events published reporting as early as January that deception was going to be China’s state policy during the pandemic.

“[T]he U.S. military might have brought the coronavirus to the Chinese city of Wuhan, which has been hardest hit by the outbreak, doubling down on a war of words with Washington.”

What was surprising, however, was how readily Western news outlets took the bait. Blatantly uncritical of China’s attempts to dodge responsibility, American news media repeated China’s claim and presented it as evidence of a growing divide within the scientific community on the coronavirus’ origins. Reuters published the propaganda almost word for word: “[T]he U.S. military might have brought the coronavirus to the Chinese city of Wuhan, which has been hardest hit by the outbreak, doubling down on a war of words with Washington.”

The whataboutism in this kind of coverage was galling. In effect, the American press published CCP propaganda.

Other news outlets celebrated China’s efforts—before the final casualties had even been tallied. NBC News published a piece entitled “Coronavirus in China kept me under quarantine. I felt safer there than back in the U.S.” Portraying China as martyrs to the coronavirus, the New York Times published an op-ed called “China Bought the West Time. The West Squandered it.” Celebrating the CCP’s swift action, Johnson writes, “China had to contend with a nasty, sudden surprise, governments in the West have been on notice for weeks … China’s leaders did fumble at the very start, yet in short order they acted far more decisively than many democratically elected leaders have to date … There’s nothing authoritarian about checking temperatures at airports, enforcing social distancing or offering free medical care to anyone with Covid-19.”

The final wave of media coverage ran interference for the CCP, arguing that the Trump Administration’s efforts to counter CCP propaganda was, of course, racist. “Republicans are using racism against China to try to distract from Trump's disastrous coronavirus response,” wrote one publication. According to the New York Times, “Trump Defends Using ‘Chinese Virus’ Label, Ignoring Growing Criticism .... ‘It’s not racist at all,’ the President said. But experts warned that the term could result in xenophobia.” CNN published a piece called, “Trump's malicious use of 'Chinese virus'.” (It’s worth noting that both of these outlets, before enlisting in the outrage campaign, referred to the virus as the “Wuhan virus”).

This coverage, which oscillated between both-side-ism about the facts of COVID-19’s origins to inflaming public sentiment against the President for taking steps to ensure history does not remember this pandemic as the American flu, reveals deeply troubling synchronicity between the CCP and the American press.

The campaign against the “Chinese virus” has shaped up to be one against the President and his efforts to combat Chinese propaganda. At the press briefing, journalists eager to flex their activist muscles by taking President Trump to task for calling the coronavirus by its place of origin. PBS and NBC News reporter Yamiche Alcindor claimed, unsourced, that “someone in the White House” was referring to the Chinese virus as the “Kung Flu.”

This talking point continued to get circulation despite being completely unfounded.

And as the mainstream American media continued to flame the divisive racial politics for the past 48 hours, the social justice Twitterati fell in line.

Yesterday, Yashar Ali tweeted that: “Anyone who is insisting on calling Covid-19 [sic] the ‘Chinese Virus’ will absolutely not have the courage to refer to it that way when they or their loved ones are being treated/saved by Asian doctors and nurses across the country.”

Some even tried to get “#TrumpVirus” to take:

Social justice Twitter is working hard to blame Trump for the coronavirus. Instead of pulling together to ease the panic, urge social distancing and other efforts to combat the virus, and hold China accountable for putting it out in the first place—virtue signalers are unable to put politics aside for even the briefest of moments.

The clear transmission of misinformation from the mouths of Chinese state officials to the thumbs of tweeting SJWs paints a clear, alarming picture of how placidly the left is willing to absorb and proliferate CCP propaganda.

Of course, since 2016, the American left has been obsessed with the question of misinformation. Convinced that the election of Donald Trump can only be attributed to Ukrainian click farms, a tremendous amount of focus and money has been invested in exposing how Russia is to blame for the popularity of conservative ideas—populism be damned.

The irony of what we are seeing online today is not lost on us.