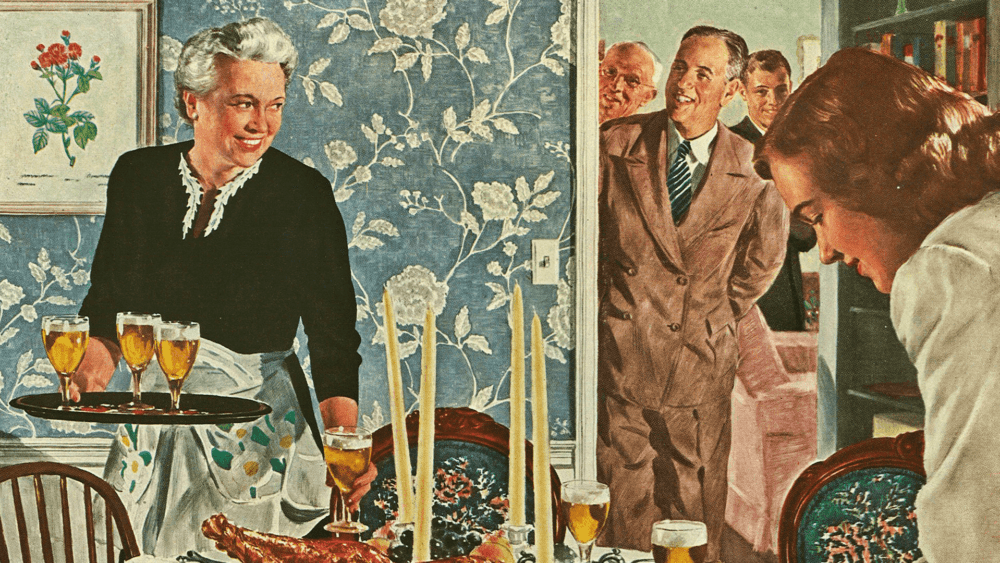 Housewives are racist. That’s the takeaway from the response to a recent BBC interview with housewife Alena Kate Pettitt. She runs a blog and YouTube channel, where she extols the joys of her traditional lifestyle. And rather than chuckling at this quaint throwback to “Leave it to Beaver,” many viewers took offense and vented their outrage on social media.

The problem seems to be Pettitt’s use of the hashtag #tradwife, which is—apparently—also used by white supremacists. Pettitt denies any such association, but that did not stop a Twitter mob from calling for her head. The BBC even went as far as to juxtapose Pettitt’s interview with photos of Hitler and German housewives giving the Nazi salute. But that wasn’t enough for the Twitter intelligentsia, who insisted they should never have given her a platform in the first place.

While there is no basis for calling Pettitt a racist, she is certainly an “extremist,” in the sense that she is going against the prevailing cultural orthodoxy. And the vitriolic response to her interview makes it clear that she has challenged some core tenets of the modern, feminist worldview.

"A Snack after the Movies," by Douglass Crockwell, Home Life in America.[/caption]

TWITTER FEMINISM MEANS CHOOSING—BUT ONLY IF YOU CHOOSE “RIGHT”

I’m a stay-at-home mother who recently gave birth to my third child. My husband and I live out fairly traditional gender roles. Up to now, my deepest fear was being labelled a “Karen.” (I’m blond, and yes, I do complain about customer service from time to time).

This is yet another example of a trend in our society whereby beliefs that were completely normal just a few decades ago are now considered “hateful.”

But, as the controversy over Pettitt’s interview reveals, these days being a “tradwife” is far worse.

This is yet another example of a trend in our society whereby beliefs that were completely normal just a few decades ago are now considered “hateful.” Most Americans’ grandmothers were tradwives. I grew up in the 1980s, and the majority of the mothers in my neighborhood—including my own—stayed home. At the time, that was widely regarded as the best arrangement for a family. Today, this view has been relegated to the dustbin of history, along with corsets and foot-binding.

Pettitt shares that she was raised by a single mother who was always out working to put food on the table. She experienced first-hand the devastating side effects of the sexual revolution, and decided she wanted no part of it. Of course—how dare she suggest that women’s liberation has been anything other than a positive social good?

For today’s Twitter feminists, the most unpalatable part of Pettitt’s interview is probably the fact that she is happy and content in her traditional gender role. Our cultural narrative around stay-at-home motherhood is relentlessly negative. Books, movies, and TV shows invariably depict them as bored and miserable.

Unfortunately, that stereotype is often perpetuated by stay-at-home mothers themselves.

"Getting Ready for Christmas" by Douglass Crockwell, Home Life in America[/caption]

Personally, I’m with Pettitt. I quit my office job seven years ago, and don’t miss it in the slightest. I love being home with my kids. But I’m amazed at how often I hear my fellow mothers dismiss our lifestyle choice with comments like “I wish I still used my brain,” or, “I can’t wait till my children turn 18 and I get my life back.” Feminists don’t need to denigrate traditional gender roles if housewives themselves are already doing it for them.

Feminists don’t need to denigrate traditional gender roles if housewives themselves are already doing it for them.

When a woman like Pettitt comes along and makes traditional femininity look attractive, she represents a threat to mainstream feminists, and she needs to be de-platformed. Pettitt's critics are using "guilt by association" to silence her. They are calling her a racist because they don't like what she has to say. Perhaps the hashtag #tradwife has been used by some white supremacist accounts. But it's also used widely on Twitter by women of many races. For them, it's a handy way to describe their choice to work for their family full-time and reject the cultural expectation that they go out and climb the corporate ladder.

The controversy over Pettitt’s interview also shines a light on our society’s hypocrisy about women’s roles. Modern women are expected to call themselves feminists and wear those ridiculous “The Future is Female” t-shirts. But if you take a closer look, they often make very traditional choices for their own families. I see a lot of this where I live in Sao Paulo, Brazil. I interact with many American women who moved here for their husbands’ jobs. (In fact, I have yet to meet a married woman who moved here for her own job). These women grasp that prioritizing their husband’s careers over their own is better for their marriage and their family. But they’d sooner die than publicly admit it.

I suspect if Pettitt called herself a “tradmom” instead of a “tradwife” the outrage would be much less severe. The attachment that mothers feel to their children is biological, and feminist ideologies can never fully account for that fact. Of course, policymakers would love for all mothers to go to work and pay taxes, leaving their children with surrogate caregivers—who also pay taxes. But some mothers will always stubbornly refuse to hand over their baby and go to an office.

"Week-end at the Lake," by Douglass Crockwell, Home Life in America[/caption]

The feminist commitment to “smashing the patriarchy,” however, is non-negotiable. Pettitt does the opposite of that. She relates that when her husband proposed, he told her, “I know that you want a man to look after you and to make you feel secure.” She says this made her feel “almost like the fairy tale came true.” In a modern feminist fairy tale, however, Pettitt should be looking after herself. She does not need a husband to make her feel secure.

Many of the negative responses to Pettitt’s interview argue that she’s running a risk by giving up her economic independence.

If her husband ever divorces her, she will struggle financially. But doesn’t that sound like a self-fulling prophecy? It represents an impoverished view of men and marriage.

If her husband ever divorces her, she will struggle financially. But doesn’t that sound like a self-fulling prophecy? It represents an impoverished view of men and marriage.

I’m reminded of the recent Peloton Christmas commercial controversy. It depicted a husband giving his wife one of those ridiculously overpriced exercise bikes. After using it for a while, she tells him, “I didn't realize how much this would change me.” The ad was certainly cringe-worthy, but apparently, it was also considered “sexist.” The backlash got so intense that Peloton’s share price took a hit.

I suspect that if the commercial had featured the wife giving the bike to her husband, or an unattached career woman buying it for herself, no one would have batted an eyelid. It might even have garnered praise amongst the extremely-online feminist crowd for depicting the wife as an economic equal. If, however, a husband gives his wife an expensive gift, it is somehow construed as offensive.

In modern western society, we are free to choose our own spouses. We don’t have arranged marriages (though, given the divorce rate, I doubt marital outcomes would be significantly worse if we did.) Pettitt used discernment and found a man who meant it when he said, “Till death do us part.” Good spouses are out there. It’s a question of carefully selecting one.

Pettitt is promoting a lifestyle that is truly countercultural. The vitriolic response is normal, though no less unpleasant. I hope she stays strong.